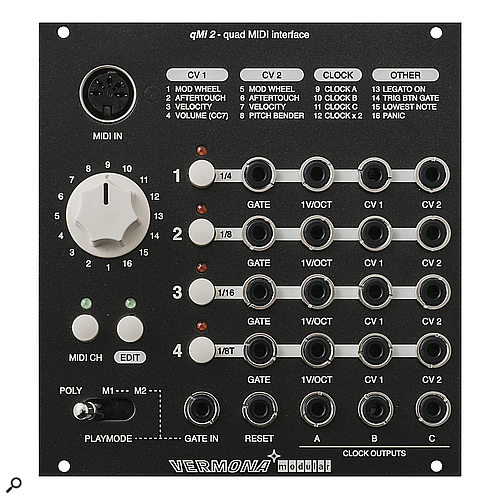 When it comes to having Eurorack and MIDI gear communicate, there are a number of things to consider. That humble MIDI cable carries a potentially large amount of data, including clock pulses, start and stop messages, plus the notes and controllers of up to 16 addressable channels. Whether sourced from a MIDI sequencer, keyboard or workstation, all this data can be put to good use in a modular system, hence the value of adding a MIDI interface.

Vermona have been quietly taking their existing technology and porting it to the Eurorack format in a series of high-quality modules. The Quad MIDI Interface 2 (qMI 2) continues in this vein, combining four separately addressable CV/Gate channels with the polyphonic voice assignment of the Perfourmer Mk2 synth. It can drive up to four monophonic voices, treat them as a polyphonic system or mix and match according to need. Each channel features a 1V/Oct note output, a gate signal and two CVs chosen from a (finite) list of possibilities. Thus CV1 can be obtained from a choice of mod wheel, aftertouch, velocity or volume (CC7), while CV2 substitutes volume for pitch-bend. Ordinarily the CV outputs range from 0-5 V, but if pitch-bend is chosen, the output switches from -2.5 to +2.5 V.

While the system of assignment isn’t as open-ended as, say, a ‘Learn type’, Vermona were careful to include all the really obvious controllers likely to be available in most cases. Each of the four channels can be set up individually for MIDI channel and controller values and the process is fast enough so you can instantly reassign whenever the mood takes you. For example, setting all CV outputs to respond to the same MIDI channel is as easy as pressing the ‘MIDI CH’ button, turning the dial and hitting a button for each CV output.

Having made a selection, it’s the ideal moment to try out the three Play modes. Select Poly and for each incoming note, the qMI 2 will jump to the next CV output, rotating around all found on the same MIDI channel. Depending on the number of MIDI notes simultaneously received, the result will be chords or patterns of rotating voices. Naturally I couldn’t resist rigging up my Studio Electronics Quadnic (supported by a four-way VCA and quad envelope) to turn my modular into a rather cool, compact four-voice synth.

Two Mono modes are provided, the first being a stacked or parallel mode in which every CV output sharing a particular MIDI channel is played at once. This is a real delight for those big unison patches that combine multiple oscillators. The second Mono mode plays each assigned channel in turn, rotating the voices like poly mode but within the single note limit. Obviously, the extent of the rotation depends on the MIDI channels you’ve assigned, eg. with just a pair of CV outputs set to MIDI channel 1, each incoming note will simply toggle between them. With four sets of CV outputs to play with, the freedom of allocation offers far more possibilities than a typical single-channel MIDI interface.

If you’re wondering about the difference between the original qMI and the mk2 version, it’s pretty simple: Vermona added a means of switching voice modes by an incoming gate. It applies only to the two Mono modes, but essentially, whichever is selected will be temporarily replaced by the other for the duration of the gate signal. For sequencer use in particular, automated switching between voice cycling and unison can be a striking and valuable effect. As well as the four sets of CV outputs, the qMI 2 extracts MIDI clock and makes it available at three points: A, B and C. For added flexibility, each of these can be allocated a different clock division, with the choices printed helpfully on the panel (1/4, 1/8, 1/16 and 1/8T). In addition, you can double the clock rate globally using one of the Edit options, and again the panel contains all the information you need. Other options include using the four channel buttons to manually trigger the gate outputs and a choice of whether overlapping notes should retrigger the gate or not. Since the CV outputs are scaled from 0-5 V, it’s helpful that you can define the lowest note recognised in order that the five-octave span will best meet your needs. Finally, there’s a +5V signal available at the Reset output whenever a MIDI Stop command has been received. Upon reception of MIDI Start or Continue, this changes to 0V, which you’ll appreciate when synchronising modular sequencers and the like.

An easy one to sum up, the qMI 2 is a gem of a MIDI interface that supplies four sets of CV and Gate outputs, each with a pair of additional CV sources and a trio of clock outputs to boot. It’s fast and painless to configure and the voice cycling modes are excellent, whether for adding variation or for introducing polyphony to your modular. Highly recommended.