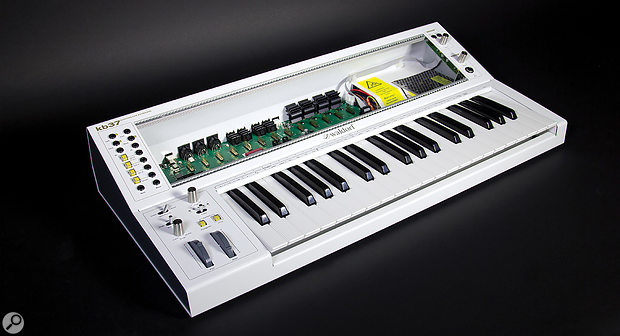 This fully-functional polyphonic MIDI controller offers an elegant and well-equipped case for your Eurorack modules.

Waldorf’s KB37 is a keyboard-based modular case with an integral MIDI to CV converter, arpeggiator, performance controls and audio I/O. It’s fitted with a Doepfer A100 bus that provides power and direct CV/Gate connectivity to any modules that follow the standard, eg. Waldorf’s own NW1 Wavetable oscillator, reviewed March 2017 issue. The feature can be disengaged via a jumper on the main board if necessary, but I found it really cool for keeping wiring to a minimum. The mains-based power supply feeds 14 connectors split into two sections, each designed to handle 1A. The manual advises that you shouldn’t exceed 1.5A in either section.

The first time I saw a KB37 it was loaded with a selection of AJH Minimoog modules. I was instantly drawn to its form and completeness, but at the time didn’t appreciate how heavy it was. As my Parcelforce pal will validate, this is a serious chunk of white-painted metal that, even before you add modules, weighs a significant 8.5kg!

Once sited in the studio, I noticed the rail into which modules are mounted was not tight against the chassis, and prior to installation, a couple of modules slipped briefly between the rack and casing. However, once they were screwed in place, I doubt even Vladimir Putin could fault it for ruggedness.

The three-octave keyboard has a fast synth action that transmits both velocity and aftertouch. In addition, a whole series of voltage outputs are available from the other controllers, both physical and MIDI-sourced. The maximum pitch output is +7V, so the KB37 has a range of seven octaves, and the left-hand control section contains the octave transposition switch required to cover this span. There’s a glide knob too, meaning you can introduce glide to the pitch CV source and, impressively, the knob transmits CC5 over MIDI too — portamento, in other words. If it isn’t already obvious, in parallel to its role of hosting a Eurorack CV/Gate system, the KB37 is also a fully-functional polyphonic MIDI controller, with the full complement of MIDI ports, sustain pedal input and a USB port for (class-compliant) Windows/Mac/Linux MIDI. Incoming MIDI from the regular MIDI in and USB is merged.

When employed as a CV/Gate controller, the KB37 supports single and multi-triggering modes, and in single triggering mode, any glide you introduce is only applied when you play legato. It’s a real bonus having these dedicated switches on the panel, not only for triggering but for allocating note priority too. Interestingly, duophonic performance is supported, with one of the assignable outputs (Ctrl-X) drafted in as the second pitch. When set up for duophony, incoming MIDI notes are routed to the two pitches in several priority combinations, although there’s only a single gate output.

Programming of the underlying functionality involves a pressing a Setup button in conjunction with the keyboard, the choices printed above each key. The built-in arpeggiator sports the usual set of octave spans and modes, including random and ‘ordered’, this being the closest the KB37 comes to sequencer functionality. Notes generated by the arpeggiator can be sent over MIDI, optionally on a different channel to regular note transmission, making it ideal for layering pads on a MIDI synth alongside an arpeggio-driven modular pattern. Interestingly, the arpeggiator values can be changed dynamically by incoming MIDI CCs, boosting the performance potential somewhat. Sensibly, synchronisation is set to ‘Auto’ at power up, ie. the KB37 becomes an automatic clock slave when it receives clock from MIDI or USB. Tap tempo is in there too, indeed the only sync option not present is the ability to drive the arpeggiator from an analogue clock.

The front panel’s Eurorack-scaled audio inputs are translated to quarter-inch jacks on the rear, ready to connect to a regular mixer, and if you only use the left jack, the signal is sent to both outputs. Also worth mentioning is the separate headphone output — not something you’d typically have in a modular system in the first place but darn cool for sitting and working out a complex patch in cans. The headphone level control is independent of the main output, so it’s just the job for cueing up in a live scenario before you bring in the main signal.

Turning to the CV outputs, they’re scaled from 0 to +5 V, with pitch-bend the only exception — it’s -5V to +5V (scaled by MIDI’s 14-bit values). The control sources at your disposal include velocity, aftertouch, bender and mod wheel plus four that are allocated using the fast and friendly ‘learn’ function. Keeping with the theme of convenience, the buttons used to set up the X, Y and Z outputs flash when the selected MIDI message is received. The last source of all, Sensor, might typically be a footpedal but it’s equally open to any device connected at the sensor input. Indeed, the manual offers examples of circuits for incorporating touch sensors, microphones, D-Beams, etc. for the more adventurous.

If your tastes don’t run to traditional pitch-bend, you can set its range to ‘off’ and route the CV output anywhere you like — great if you prefer a second mod wheel. For use with sequencers, the panel delivers a clock signal (its resolution configurable) and a reset output. The latter aids synchronisation in that it sends a +5V pulse whenever a MIDI stop event is received. It seems to me that reset would have been far better with an option to also send a pulse on receipt of a MIDI start. Perhaps something for a future firmware update?

Summing up is easy: the KB37 is a beautiful-looking case/keyboard, made more attractive once it’s loaded with your module selection. If the price seems intimidating, remember this isn’t just a modular case with a power supply and built-in audio panel. When you factor in the keyboard, controllers, arpeggiator and MIDI to CV interface it’s not quite so hard to justify. After all, even if you’re into drones and abstract tonalities, a conventional keyboard can be an appealing way to connect to your modules. And having an arpeggiator to leave running while you experiment is more useful than I, for one, expected. Ultimately, the KB37 is either a deluxe starter system, a self-contained, portable system or a component in a much larger setup — you decide. And if you plan on taking it out to play, it could provide a bit of healthy exercise too!

A rugged, self-contained modular case with integral keyboard, the KB37 features a 16-bit MIDI to CV interface and full-sized audio outputs. Other than the impact on your wallet and muscles, it’s difficult to fault.