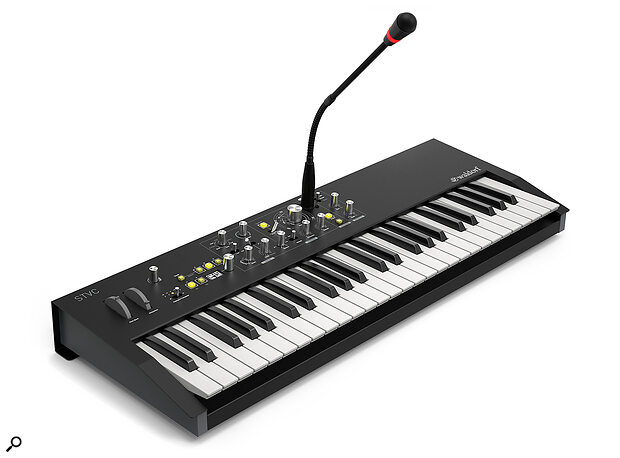 The STVC is much more than just a string synth.

There are some who seem to think that playing a string synth will turn them into spotty, friendless nerds doomed to a life of nothing but endless porn and early Genesis albums. This is bollocks, although many still believe that string synths are the preserve of sexagenarians nursing a half of Old Peculiar while repeating stories of how great Reading Festival was back in 1976. However, the popularity of string ensembles has soared in recent years, and the first dedicated hardware string synth of the 21st century was introduced in 2014 when Waldorf took the plunge with the Streichfett module. Now they're at it again, releasing an instrument that some may see as a keyboard version of the Streichfett with a vocoder bolted on for good measure. But, as we shall see, it turns out to be considerably more than that.

Although it weighs just 7.5kg, the STVC's thick steel case is quite hefty, and the lips on either side are ideal for live use, making it easy to lift it in and out of cases and on to stands. Similarly, the full-sized, four-octave, velocity and pressure sensitive keyboard feels solid and has a surprisingly firm feel. The feeling of sturdiness is let down a little by slightly wobbly knobs, and even the change from plastic to stainless steel can't hide this, but the only disappointment for me was the position of the pitch-bend and modulation wheels. You'll find these behind the keyboard rather than to its left and, while I understand the desire to save a few centimetres, I wish that manufacturers would stop doing this. The final performance control is an octave selector with a ±2 octave range.

As on some other recent instruments, the STVC's 128 x 64 pixel screen is tiny, but it's just about sufficient if you're prepared to squint. Having done so, you may notice a horizontal line at the bottom of the display. This represents the saved value of any parameter you adjust and allows you to see whether the current knob position is above or below this. That's a nice touch.

The other feature on the top panel is the XLR socket for the supplied gooseneck microphone. As always, the neck of the microphone is too short so a separate mic mounted on a conventional stand is the way to go. Bear in mind, however, that the STVC provides only 2.4V phantom power; you won't be able to use a +48V phantom-powered mic unless it has a separate power supply.

The STVC's fully polyphonic Strings section appears to be identical with that of the Streichfett, and an A/B test — even checking for the unevenness in the loudness that I had discovered when reviewing the earlier module — didn't allow me to slip a 1976 Rizla between them. Consequently, the STVC's character remains closer to that of an Eminent 310U or a Solina than other string synths of the era.

The large Registration knob determines the underlying waveform, interpolating between a handful of additively generated waves ranging from the aforementioned strings to various formant-y vocal sounds and a small range of pipe organs. The resulting wave can then be heard at one of three octave settings — 8', 4' or the sum of both — and each note is shaped by its own ASR contour generator. The sound is then directed to the chorus/ensemble that generates the classic string and choral effects. As before, there are three settings for this: Chorus provides a slow modulation using a single LFO, String generates a more complex modulation using two LFOs running at different frequencies, and the combination of both generates the rich ensemble effect that's underpinned every string synth from the Solina onward.

The second sound generator is again called Solo and offers the same polyphonic Bass, E-piano, Clavi, Synth and Pluto waves (here called Tones) and, as before, you can morph smoothly between these. Happily, the polyphony has now been increased from eight voices to 16, and this proves to be a significant improvement. In addition, there are two extra monosynth Tones called Mono and Full. A switch selects between this section's AD and ASR contours, with an Attack that adds a loud (and intended) percussive thunk between the 7 o'clock and 10 o'clock positions, and a Decay/Release with a maximum duration of around 20 seconds. The fourth knob here is called Tremolo. When the STVC is outputting a single channel of audio or when the Solo section is being used as the carrier for the vocoder, this is the effect generated. But when the output is stereo, the Tremolo is replaced by auto-panning. In either mode, the knob introduces the effect as you move it away from zero and then increases its rate as you rotate it toward its maximum.

As before, you can play the Solo section above or below a user-defined split point but, because it's always layered with the Strings, you have to jump through MIDI hoops to obtain the sounds of the two sections separately. Apparently, this limitation was discussed when the STVC was conceived but, for reasons that I can't imagine, the designer insisted on retaining the Streichfett's architecture. This was a mistake. The enhanced Solo section — and, in particular, its new monophonic sounds — deserves to be played and heard independently.

Despite the improvements already discussed, the most obvious difference between the STVC and the Streichfett is the addition of its 256-band vocoder. Used in its simplest way, you stick the supplied microphone into its socket, turn the Balance knob to Strings, switch the vocoder on, choose whether you want the output 'clean' or thickened by the chorus/ensemble effect, press some notes on the keyboard and then sing or speak into the mic. But there's a lot more to it than that.

Firstly, you can obtain a huge range of carrier waves. If you use the Strings section as the carrier, there are five waveform types, called F (which lowers the formants to obtain deeper voices and effects), N (neutral, something approximating a simple square wave), J (which adds jitter to create noisy, speech-like effects) and F+ (which shifts the formants upward to create child-like voices and chipmunks), and you can morph smoothly between these to fine-tune the underlying timbre. Secondly, you can use the Solo section as an additional carrier by selecting its Layer option and adjusting the Strings/Solo balance to determine the relative contributions of the two sections. But, as they say on all the best shopping channels, there's more...

On the rear panel (see 'The Rear Panel' box) you'll find a quarter-inch socket that can act as a monophonic audio input, and you can determine whether the audio presented to this is used as the vocoder's modulator or as its carrier. This opens up all manner of possibilities including (if you jump through a few hoops) the ability to vocode a signal with itself. But there's still more...

The modulation matrix (which we'll address shortly) also provides six parameters that can be programmed and modulated to further modify the vocoder's response. These include a formant shifter, the ability to modulate the jitter when using the Strings section as the carrier, the ability to alter the rate at which the coefficients are generated when analysing the modulator signal, and the ability to add 'leakage' of the modulation signal into the output. (Instant Jon Anderson!) These make the vocoder far more flexible than it would otherwise be.

The final trick up the vocoder's sleeve is called Freeze. This appears to allow you to record a few seconds of the audio received at the modulator input although what it actually does is save the filter coefficients generated from that signal. Once recorded, you can trim the duration using the Freeze Start and Freeze End parameters, and the resulting signal then loops when you play the keys with the vocoder selected. Interestingly, you can modify the starting position and playback speed using the modulation matrix, which offers yet more possibilities. Unfortunately, you can only save a single Freeze within the STVC itself, which is a huge limitation. Sure, you can dump and recall a Freeze, but think how much better 128 Freeze memories would be. Furthermore, the Freeze loop is replayed monophonically, which means that all the vocoded notes are at the same point in the loop, no matter how many keys you press or when. 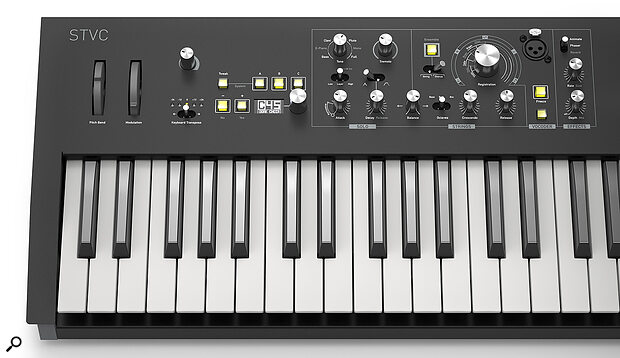 Like the Streichfett, the STVC offers three effects in addition to the Strings' chorus/ensemble and the Solo's vibrato. Animate modulates the Strings' Registration and you can use this to create the equivalent of pulse width modulation, a range of 'ya-ya-ya' effects and some unusual rhythmic effects. There's no way to synchronise these to MIDI clock, but you can at least control the modulation rate using a MIDI CC. Next comes a gentle phaser that also acts upon the Strings alone. Finally, there's a simple reverb that affects the outputs from both the Strings and Solo sections. You can only program one of these effects at a time from the panel but, if you're prepared to dive a bit deeper, all six of the LFOs that drive them are available as sources in the modulation matrix and all of their rate/depth and size/mix parameters are available as destinations. This is good stuff.

The five-slot matrix is perhaps the most unexpected addition to the STVC, not least because you can use it to program absolute values for many of the instrument's underlying parameters, which means that it's a hybrid of a synth programmer and a modulation matrix. It offers 18 sources (some of which are bipolar, for a total of 24 options) and you can apply any combination of these to each of the 41 destinations, which include all manner of things that I hadn't expected. The most significant of these are the cutoff frequency and resonance of the Solo section's unheralded but polyphonic low-pass filter section. This isn't the most powerful filter you'll have ever heard, but it can shape a huge range of sounds ranging from smooth polysynths to some surprisingly powerful monosynth patches. Unfortunately, while the filters are resonant and will even oscillate, the lack of MIDI Note Number as a modulation source means that they can't track the keyboard. I discussed this with the chaps at Waldorf and was pleased to learn that this was already on the wish list for a future update.

Returning to the matrix itself, you can send a single modulation source to multiple destinations and multiple sources to a single destination, while the fifth slot adds an important facility that's missing from the other four: the amount by which its source affects its destination can itself be the destination of the other slots.