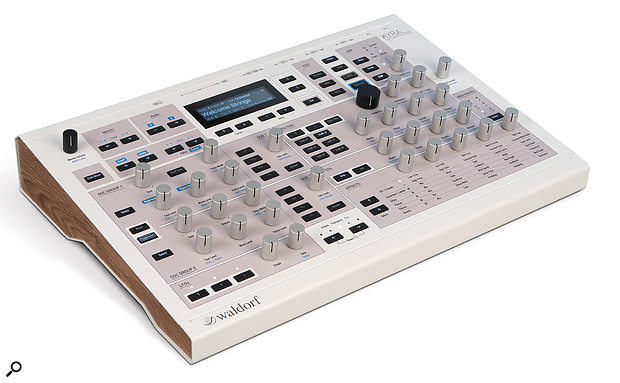 Kyra's FPGA-based synth engine is technologically innovative, but what's it like as an instrument?

Two years ago I reviewed the Waldorf Quantum, a superb synthesizer that I view as the company's finest achievement to date, so it was with some excitement that I approached the Kyra. This feeling was enhanced by its reassuring size and weight as well as its smooth, wobble-free knobs. I was a bit surprised by its small monochrome screen, but it was only when I looked at its rear panel that I was marginally disappointed; I have no idea why Waldorf used 1970s-style black plastic quarter-inch sockets and ring nuts and allowed them to protrude so far.

The Kyra's basic unit of sound is a Patch, but you can program and play one of these only when it's inserted into a Part. This contains additional parameters — MIDI channel, level, pan, transposition, output pair and so on — that are edited and saved as part of an enclosing Multi. There are eight Parts within each Multi and these can be split by restricting them to constrained keyboard ranges, layered by making them respond to the same MIDI channel, or used multitimbrally by allocating different channels to each, or any combination of these. There's no voice stealing between Parts, so you can think of the Kyra as eight individual virtual analogue synthesizers drawing from a common pool of Patches. The strange bit is that you're always in Multi mode, so you only ever have access to Patches within the Parts of a Multi. Furthermore, the Part doesn't contain the Patch; it only points to the original so, if you modify and save a Patch within one Multi, you'll affect the same Patch in every other Multi that uses it.

The memory holds 128 Multis plus 3328 Patches spread across 26 banks, the majority of which are described as ROM. But, while you can't overwrite individual patches in the ROM banks, you can transfer banks of Patches to them, so it's not ROM at all but some form of flash RAM. However, it's the genuine RAM that worries me. The manual explains that this is maintained by a rechargeable battery that, in the absence of mains power, will sustain the memories for just a few months. If you're accustomed to synths that haven't had their CR2032 batteries changed in decades, you'll have to keep a close eye on this.

Rather than provide conventional VA oscillators, there are two Oscillator Groups (OGs) in a Kyra Patch, and these offer two modes of sound generation: Wave and Hypersaw. The first of these allows you to program the OGs independently, with each offering three simultaneous waveforms: sawtooth (actually a ramp), pulse and Wave, the last of which accesses a library of 4096 public domain single-cycle waveforms. Waldorf often refer to these waves as wavetables, but don't be misled; there's no wavetable synthesis on offer. There's hard sync of OG2 by OG1, and frequency modulation of OG1's Wave by OG2's. An Auxiliary oscillator control in OG1 offers two additional functions, acting as the volume control for a white noise generator in both OGs, or as the volume control for the output from a ring modulator that uses the Waves selected in OG1 and OG2 as sources. Consequently, you can't obtain ring modulation and noise simultaneously, and you can't generate different noise levels in each of the OGs. Each OG also boasts a detunable sub-oscillator offering four waveforms. This is a separate entity from the ramp, pulse and Wave generators because it doesn't contribute to, and isn't affected by, FM, sync or ring modulation. This makes it useful for enforcing the fundamentals of exotic timbres generated by sync and, in particular, FM.

Selecting Hypersaw mode defeats OG2 and causes OG1 to generate six detuned sawtooth waves as partials. You can control the spread of these partials as well as their loudness distribution and their stereo width to create anything from gentle chorusing to insane amounts of wobbling. In addition, a sub-oscillator function can steal two of the six partials and detune them by an octave. Hypersaw generates a limited but important range of sounds, including ensembles as well as many useful pads. However, I found that my Hypersaw Patches distorted unless I reduced their volumes to as little as five or six out of 127. One consequence of this was that, when I used MIDI CCs to fade Hypersaw sounds in and out of a performance, the coarse quantisation made this less smooth than I wanted.

The levels for the various waves generated by the OGs are mixed within the Groups before passing to the two filters in the filter section. These offer six filter types — low-pass, band-pass and high-pass, each with 12dB/oct and 24dB/oct options. Waldorf describe these as "accurate emulations of classic analogue ladder filters" and claim that "higher [resonance] values can cause large resonant peaks and, ultimately, self-oscillation" but nothing in the Kyra's filter section would cause it to self-oscillate in any conventional fashion, even if I used the modulation matrix to further boost the amount of resonance.

The default signal path is for the signals from OG1 and OG2 to be mixed equally and then passed through just Filter 1. However, there's also an OG Dual Mode that, in Wave mode, layers one OG1+OG2 pair with a second and allows you to detune them. The first pair is then directed to Filter 1 and the second is directed to Filter 2. However, you can't adjust the filters separately; apart from a couple of obscure modulation options, they act equally upon both pairs. If you invoke OG Dual Mode while in Hypersaw mode, a Hypersaw with 12 waveforms is generated, with alternate partials directed to Filter 1 and Filter 2. But, again, you can't adjust the filters individually, although you can adjust the stereo width of the resulting sounds.

Following the filters, the signal passes through a compressor that the manual calls a limiter. This offers light, medium and heavy responses, and I suspect that this is where some of the unwanted distortion I encountered had originated. Following this, the audio amplifiers shape your notes in the usual fashion, with EG1 hard-wired to their gains. There are also parameters for the static pan position, the LFO1 amount (to generate tremolo), and the LFO2 amount (to generate auto-panning).

The signal now passes to the multiple effects units contained within each Patch. Although the control panel shows six of these, Waldorf claim that there are nine modules per Part, but even if you count the formant filter and compressor as separate modules, that's still only eight.

The chain starts with an EQ offering high and low shelves and a sweepable mid with variable Q. Treat this with respect; adding too much gain here will again cause distortion. Also, don't try to modulate it in the modulation matrix because you'll hear stepping. The EQ is followed by a two-band formant filter. Unfortunately, there's no Q control and you can't tune the peaks separately so, while it imparts a pleasing vocal quality to sounds, it's not as flexible as one might hope.

Next comes another compressor, followed by a distortion module. There are five distortion models: soft and hard rectifier, soft and hard bit-crusher, and Gnasher, and you can soften the distorted sound using a gentle low-pass filter. I'm not a fan of the first four models, but I quite like the Gnasher which, when used sympathetically, can add bite. But warm valve distortion it's not.

These are, in turn, followed by a delay that offers stereo and ping-pong modes and feedback of up to unity. I was a little surprised to find that changing the Delay time has no effect once the signal has been sampled, so you can't use it for modulated effects. Timing can be derived from a rather coarsely defined internal clock, MIDI and LFO3, the last of which means that you can create synchronised delay/modulation effects without using an external clock.

The delay is followed by a six-stage phaser and then a chorus, which I think is a strange choice of signal path. (I would almost always place the delay after these.) The Phaser offers bipolar feedback gain, a dedicated LFO that runs slowly enough for the gentle sweeps that we all love, good modulation depth, and control over the base frequency of the effect. Its menus provide a huge range of LFO waveshapes but, once you've experimented with these, I suspect that you'll return to the usual sine or triangle waves. You can also modulate the effect via the modulation matrix, and doing so creates a somewhat different sound. The chorus unit has four modes of operation: comb-filtering, flanging, chorusing and doubling. Its sound is pleasing but it lacks the deep swoosh of an analogue chorus. As elsewhere, it's very easy to create distortion in these units, so you must watch your signal levels to avoid this.

The final effect is a reverb unit with a claimed maximum time of 20 seconds, pre-delay, 'darkness' (a low-pass filter on the input to the reverb) and damping. I sometimes found this to be useful, but on other occasions it created a strange detuned effect that was rather odd. I would use this sparingly.

At the end of the signal path there's yet another compressor/limiter. This keeps the signal within bounds before passing it to an Output Mixer that allows you to determine the level of the Patch and its position in the stereo field on a chosen analogue L/R output pair. Again, distortion is your enemy here because, if you direct multiple Parts to a given pair, clipping may ensue. Finally, there's a master volume control that controls all of the analogue outputs including the headphones.

The Kyra's rear panel is dominated by eight quarter-inch analogue audio outputs configured as four stereo pairs. The nearby headphone output mirrors the signal from the 'A' pair. Eight stereo 24-bit digital audio channels are carried by the USB 2 connector, which can also accept a single stereo stream from the host. MIDI is carried by 5-pin DIN In/Out/Thru sockets as well as USB2. The final hole is for the 12V external power supply. This doesn't offer a locking connector or screw-on sleeve, so it deserves my usual supercilious sneer. Furthermore, it delivers 3A through a 4-pin PS2 connector, so don't lose it; you're not going to find a replacement in the local electrical shop. The last bit of rear-panel furniture is a receptacle for a Kensington security lock.