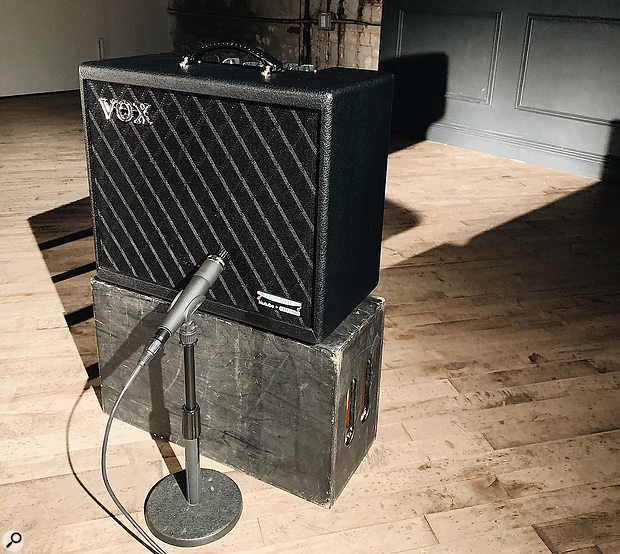 Need a single amp to cover all your home–recording and gigging duties? Vox have got you covered!

A common problem for those of us who both record guitar at home and play it live is that amps that are loud enough for on-stage use can sound somewhat disappointing when played at studio-friendly levels. And while digital models of analogue amps can help, some still prefer playing through the real thing. Vox have long achieved decent results by combining real analogue valve technology with digital modelling stages in guitar amps, starting with their underrated VTX series. Since then, they've continued to make improvements and add different hybrid models to their range, and this new, low-cost, Cambridge 50 model teams Vox's more recent Virtual Element Technology (VET) modelling with a miniature Nutube (a tiny but real valve). The aim is to deliver the tone, distortion and dynamics characteristics of a traditional valve amp, but with the ability to turn the output level up or down as much as is required. 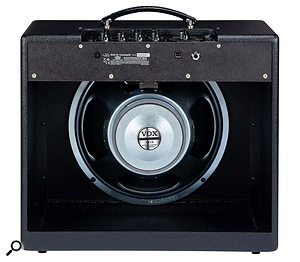 The Cambridge 50 is fitted with a 12-inch Celestion VX12 speaker.Housed in a simple but stylish MDF, open-back cabinet (452 x 240 x 410 mm) and equipped with a 12-inch Celestion VX12 speaker, the Cambridge 50 is light enough (9kg) to carry with one hand. Like their mini MV amp heads, introduced a few years ago, the Cambridge 50 runs from a chunky external power supply. That's typically something that would irritate me, but in this case I was less bothered by it, as I could easily mount the supply and its clover-leaf-connector mains cable inside the open-backed cabinet using Velcro.

A rotary switch selects one of 10 amp models, or a clean Line setting that includes only the EQ section. Only the Vox AC30 and AC30 Top Boost models are given their inspiration's original name, but the others are easy enough to decipher. Suffice it to say that you get access to models of Britain's and America's finest, plus a couple of Boutique settings based on the elusive Dumble Overdrive Special. Rotary controls set Gain, Treble, Middle, Bass and Volume in the usual way, and a further Power Level control can adjust the output from a studio whisper to the full 50W without changing the sound or response. 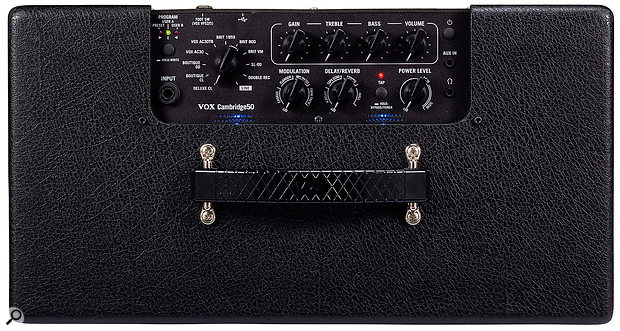 The mildly cryptic names of the various amp models, which can be selected at the twist of a knob, don't take too much deciphering!

Basic effects are also included, and are engaged via the now-familiar approach in which each segment of the pot's travel selects and then controls the amount of effect. There are two such controls, one for modulation effects, the other for delay/reverb. The Modulation control offers Chorus, Flanger, Phaser or Twin Trem, while the Delay/Reverb knob provides Analogue Delay, Tape Echo, Spring Reverb or Hall reverb, and a Tap Tempo button adjusts the delay and reverb decay time. Pressing and Holding the Tap button brings up a simple E tuner, using the three Program LEDs as flat, in-tune or sharp indicators. The Program button can be held to save a preset and, out of the box, the amp can store two user presets, though with the addition of the optional VFS5 footswitch the number of user presets increases to eight. By default each amp model loads up with preset factory effects and settings, but you can switch to manual mode by holding down the Program switch until the LED goes out.

In terms of studio recording and home practise applications for this amplifier, it's not just about being able to play quietly. Notably, it includes a USB audio interface for direct recording, and you can access Vox's Tone Room editor/librarian software to make patch design even simpler. 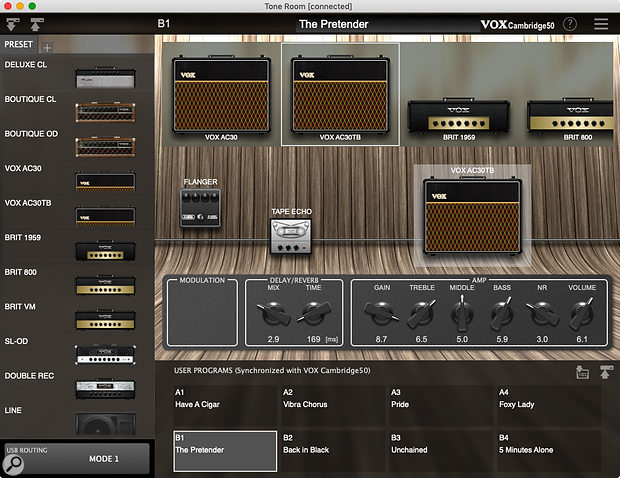 The free Tone Room software allows you to select, tweak and store presets.

Also, a headphone jack provides a speaker–emulated sound that can also be used as a DI recording source, and there's an Aux input that allows you to input play-along backing tracks for practise. Furthermore, the JamVOX III amp-modelling software for Mac/Windows is bundled as a free download, and this includes the ability to separate, emphasise or remove a specific part from a song. This feature, along with a loop mode and a tempo changer, makes it easier to learn parts from records. 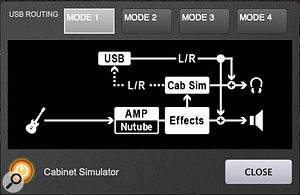 The amp includes a USB recording interface, with routing configured via software.So far so good, but what about the sound? On the whole, playing through the Vox Cambridge 50 is very satisfying, and the Vox AC30 models sound particularly authentic to me. There's enough range to go from Shadows clean to power-chord rock but, most importantly, those just-breaking-up jangly sounds work really well. The other amp models also get very close to what they purport to emulate and offer a decent dynamic response, with sounds cleaning up in a nicely progressive way as you back off your guitar volume control or play more gently. As the amp models cover everything from a clean Fender-ish sound to high gain, you can get close to pretty much any guitar sound you're likely to need. At low volumes, the sense of low-end push you get from a cooking valve amp inevitably disappears, but that's often the case when listening to a miked guitar amp from the control room at modest monitoring levels anyway. Importantly, you get more punch as you turn up the volume, and at maximum this amp is very loud indeed.

The software editor doesn't give a huge amount more control than the hardware, but it does allow you to save your favourite patches for future use. The USB interfacing also works fine, with four different routing options to allow recording with or without speaker emulation and to accommodate re-amping. The emulated recording output sounds somewhat on the bright side to me, and for serious use I'd be tempted to bypass the speaker emulation and use a third-party IR-based cab emulator. However, you can achieve perfectly usable results with it if you're prepared to do a little EQ'ing to smooth and fatten the sound.

Given its attractive price and flexibility, there's a lot to like here — this amp is versatile, very studio friendly and more than loud enough for pub/bar gigs.

In this price range the most obvious contenders are from the Line 6 Spider range or Fender.

I've always been pleasantly surprised by Vox's hybrid approach to amp modelling and the Cambridge 50 is no exception. For the money, this is a good-sounding, playable amp that has applications both on stage and in the studio.