Toontrack The Rooms Of Hansa SDX 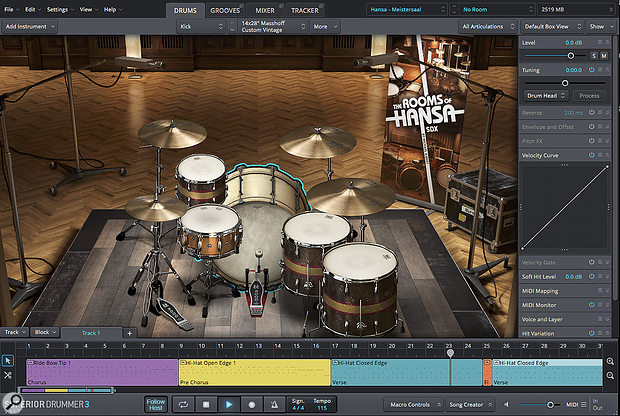 Toontrack's Superior Drummer 3 set the bar for acoustic drum samples. Their Rooms Of Hansa expansion has raised it.

Musicians and producers currently have an incredible choice of virtual drum instruments but, when it comes to acoustic drums, Toontrack's Superior Drummer 3 is hard to beat. While the core 230GB SD3 library is very impressive, Toontrack are happy to tempt users further with a series of SDX libraries and the latest of these is The Rooms Of Hansa. However, with that already excellent core library, what does the The Rooms Of Hansa SDX offer that existing SD3 users might want? Let's find out...

History In A Place

Berlin's Hansa Tonstudio has a remarkable history. Located in a magnificent building, it was transformed into a recording studio in 1961, the same year that the Berlin Wall was constructed, and which sits only 150m from the studio building. From the mid-1970s, it attracted an impressive client list including David Bowie and Iggy Pop ('Heroes' and 'Lust For Life' were both recorded at Hansa in 1977) and others — such as Depeche Mode, Marillion, U2, REM, Killing Joke, Snow Patrol, KT Tunstall, Manic Street Preachers and Chvrches — have followed.

As befits a studio of this standing, the equipment and staff are of the highest level, but the other key element is the physical space and it is this aspect of the studio that is fundamental to the The Rooms Of Hansa. Four distinctly different acoustic spaces — a small vocal booth, a 'live' room, a 'marble' room with stone walls and the Meistersall (a large hall with a natural ambient sound) — have been the location for countless iconic recordings. Drum recordings from each of these rooms form the unique feature of this SDX.

These spaces have been used to record a combination of six different drum kits (different kits were used in each space), with extensive arrays of close and ambient mics to fully capture the different sonic characters of the rooms. In charge of the recording process — and the careful selection of the kits — was Grammy-winner Michael Ilbert, whose credits include Muse, Roxette, the Cardigans, the Hives, Adele, Ed Sheeran and Katy Perry. The kit selection includes Paiste cymbals, but the shells themselves come from brands such as Masshof, Meazzi, Camco, Wahan and Sugar Percussion. It's all high-quality boutique stuff.

With multiple kits and multiple rooms, and mic arrays with up to 40 channels, it's perhaps not surprising that The Rooms Of Hansa's impressive audio detail is matched by its impressive size. With 120GB of sample data (and a further 120GB of space required during installation), you do need to ensure you have plenty of room (in a hard-drive context) for Hansa's rooms. And, while I hope your internet download speed is faster than mine, the download and install process itself is technically straightforward. 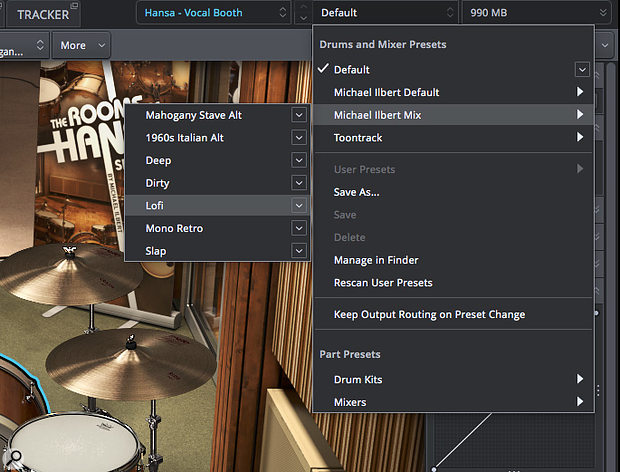 An excellent range of presets are included for each of the four rooms providing plenty of sonic variation right out the box.

Within SD3, the sample content is split into a separate library for each room. A wide range of presets are included in each case and provide plenty of tonal and ambience options. Some of the presets themselves are fairly substantial. For example, the 'Roomy' preset from the Meistersall library clocks in at around 8.5GB. Yes, SD3 does provide options to optimise system demands, but this might be a consideration on hosts that are not so well endowed.

Given the different mic arrays used in each room, the SD3 mixer configuration also differs for each library. This is particularly obvious in the Meistersall library, where there is a massive selection of ambience options including mics that can provide a full 5.1 surround configuration plus two additional 'height' microphone pairs; it's impressive stuff.

The MIDI groove pack included offers loops specifically targeted at each of the four rooms. For example, one of the kits (the Acrylic Kit) recorded in the Marble Room included octobans and rototoms. These are therefore exploited in the MIDI associated with this room. There is some cool content throughout, though, and for those like me with less than stellar drumming skills, Toontrack's MIDI content is an unsung hero within the SD3 universe.

If you can record acoustic drums better than this in your own studio space, then you are very fortunate indeed.

Of course, the key question is how The Rooms Of Hansa's drums sound and, in this regard, the SDX demonstrates another aspect of 'size matters'. While SD3's default sample library can certainly take your drums from tight and intimate to big and ambient, Hansa takes that to a whole new level. In addition, the impressive selection of room mic options provide unprecedented control over both the level and tonal character of the ambience in each case.

Toontrack provide a full account of the drum and microphone details on their website so I'll not repeat that here. Instead, I'll focus on two personal observations. First, the drums sound consistently fabulous across all four rooms. If you can record acoustic drums better than this in your own studio space then you are very fortunate indeed (and, at some stage, Toontrack may come knocking on your door). For the rest of us, SD3 and The Rooms Of Hansa can put world-class acoustic drum sounds in our productions in a remarkably efficient fashion.

Second, the library is tremendously flexible. This reflects the design intentions of the product and therefore manifests itself in two obvious ways; the varied ambient properties of the four recording spaces and the incredibly detailed control the SD3's mixer provides over the level and tonality of the dry/ambience blend. In terms of giving you options to craft your perfect acoustic drum sound, this is powerful stuff.

The SDX includes a well-stocked MIDI groove library with pattern groups designed specifically for each of the four rooms.

As you would expect, the style of the default kit presets for each room tend to reflect their differing sizes and acoustic properties. As such, if it's dry and tight you are after, then the Vocal Booth presets are where to start. Somewhat livelier rock and pop treatments can be found in the Marble Room and Live Room presets and, in turn, the Miestersall can deliver huge amounts of natural ambience.

That said, the included presets ably demonstrate that you have the tools to go 'dry' with any of the kits in any of the rooms by muting the overhead and room mics. In doing so, however, the underlying quality of the engineering shines through in the dry kits. Equally, you can go 'ambient' in any of the rooms. For example, there are some excellent Vocal Booth presets where the core of the sound remains tight and punchy but a very tasteful (and controllable) amount of ambience has been introduced via some reverb. These would be ideal for some pop or hip-hop styles, or in a busy mix where too much drum ambience might be problematic. At the opposite end of the spectrum, if you want to chase the Bonham 'Levee' drum sound, then the Miestersall drums can take you there and beyond, or you can blend in some of the 'Stairs' mics to one of the Marble Room kits.

For my own musical needs, however, the highlights were undoubtedly within the Live Room and Marble Room presets. You can cover a lot of musical ground here, but for all flavours of rock (perhaps with the exception of metal?), these are simply the best sampled acoustic drum sounds I've ever used. If you want organic-sounding acoustic drums that feel like you are right in the room with them, you can get that. Equally, if you want something more controlled and produced, there are presets that deliver that on a plate. From the first kick to the last cymbal, these drums sound fantastic.

As shown here for the Marble Room, SD3's mixer is well populated with ambience and channels with character processing, giving plenty of ways to customise the overall drum sound.

I suspect folks at Toontrack would be the first to acknowledge that you don't have to go to their flagship SD3 product to get fantastic-sounding drums from software. However, if you want (and can afford) the very best, and can utilise the very detailed control it provides, for acoustic drum sounds it's difficult to deny SD3 is the leading contender.

Superior Drummer 3's core acoustic drum library is already excellent but, with The Rooms Of Hansa, Toontrack have both nudged the bar even higher and broadened the sonic palette. This is hugely impressive stuff and, for existing SD3 owners, very competitively priced considering just what is on offer.

Toontrack raise the bar again for sample-based acoustic drums. The Rooms Of Hansa is a brilliant addition to the core SD3 library.