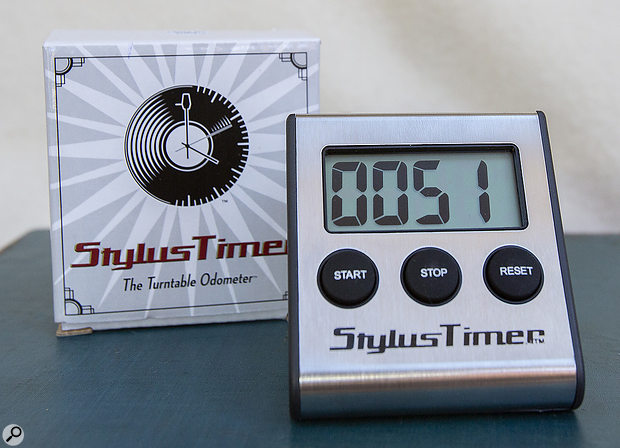 One of the fundamental rubrics of the hi-fi world is that precious vinyl cartridge styli should be replaced after a certain number of playing hours — around 1000 hours is an often quoted figure, albeit one subject to considerable debate. But how can you easily keep track of the stylus playing time? A widely syndicated American newspaper columnist, Don Lindich, who specialises in electronics and home entertainment issues (and runs a Q&A website: http://soundadvicenews.com), was also troubled by this conundrum. Unable to find anything suitable for the purpose he decided to design a solution himself and came up with the 'Stylus Timer'.

If it reminds you of an electronic kitchen timer that's because, essentially, it is one — its display and electronics are proprietary (patent pending) designs, but using an existing kitchen timer shell helped to keep the production costs down.

The count is initiated by pressing a big round Start button (emitting a single confirmatory beep) and the large LCD's four digits display up to 9,999 hours but, since it takes an hour for the digit display to change, a flashing 'H' confirms the active running status. The count is paused by pressing the Stop button (with a double beep), while a Reset button zeros the count when required — but only if held for about five seconds to avoid accidents. A low-battery indicator warns when the single AAA cell needs to be replaced, and the current count is retained during the changeover.

A brushed-steel front and grey plastic side pieces help the Stylus Timer look smart, and it is equipped with a flip-out stand, a magnet for mounting on suitable lump of metal, and a key-hole for hanging on a screw.

So why am I writing about this in a music-recording magazine? Well, the Stylus Timer has plenty of other uses where large hour counts are helpful — and these include tracking the playing time of reel-to-reel tape heads, the laser-burning time of CD recorders, long project session working times, or even the 'break-in' time for new speakers.

In all seriousness, though, this is a genuinely handy and unique product that works very well and won't break the bank. OK, so it's around four times the price of a typical electronic kitchen timer — this product is aimed at the deep-pocketed high-end hi-fi fraternity — but there's nothing else on the market that does what it does.