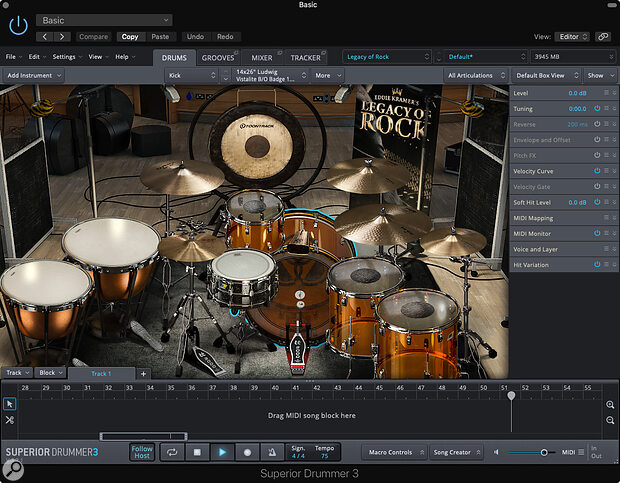 On the bench today we have two new Toontrack expansion packs curated by the celebrated Eddie Kramer. These drum sound libraries — one for Superior Drummer and one for EZdrummer — really live up to their titles as the kits and combinations on offer slot into pretty much every genre of rock, and rock is something Eddie Kramer knows a thing or two about. I’ve had the privilege of chatting to Eddie at various NAMM shows and events, and he’s one of those producers who is happy to talk about his working methods rather than pretending that everything is a secret. His career started in the 1960s, including working alongside acoustician John Storyk in the creation of Electric Lady Studios — Jimi Hendrix’s million dollar Manhattan studio — after which Eddie went on to engineer many of Hendrix’s records. Eddie’s stories from that period alone could fill a book. Since then Eddie has worked with Led Zeppelin, the Rolling Stones, the Beatles, Traffic, Peter Frampton, David Bowie, Joe Cocker, Whitesnake and Kiss, to mention just a few. And he’s still very much in demand today.

Recorded at Air Lyndhurst studios in London, Legacy Of Rock was recorded using five drum kits plus some additional kit pieces that include two timpani and two Paiste gongs, one 36‑inch and one 60‑inch. And don’t forget the cowbell. The more compact and less costly EZX Classic Rock expansion pack, which is compatible with both EZdrummer and SD3, offers two drum sets plus additional kit pieces, all derived from the Legacy Of Rock sessions. Legacy Of Rock can only be used with SD3. Though it has fewer articulations, microphones and mixer channel options, EZX Classic Rock still includes the timpani, cowbell and the 36‑inch gong, so while it is a considerably slimmed‑down version of its SD3 counterpart, you still get the Amber and Silver kits plus additional parts so you really don’t feel as though you have been short‑changed. 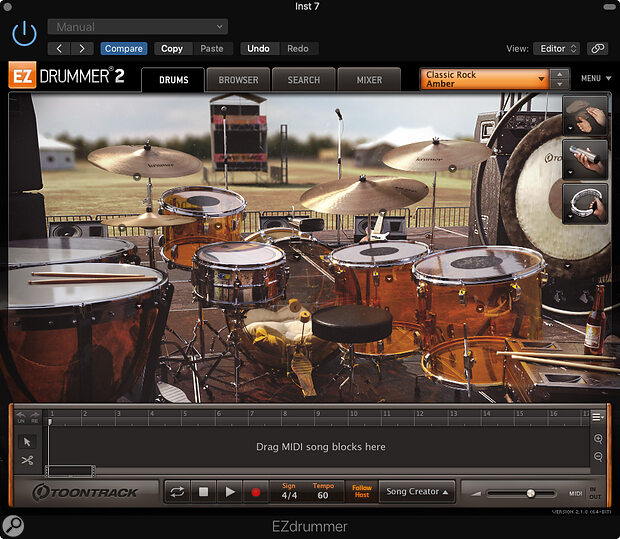 Other than the Black kit, which is by Gretsch, the kits are by Ludwig with extra snares from Camco, Rogers and Slingerland. The see‑through Amber Vistalite kit is similar to the one John Bonham used during the classic The Song Remains The Same recordings at Madison Square Garden in 1976, the drums, cymbals, timpani and gong all chosen to be as close to the originals as possible. The Zep recordings were used as references when tuning and miking the kit, which was also recorded with snare wires off and played using mallets and hands to replicate the different sounds that John Bonham coaxed from his drums. This is a big‑sounding kit with a fat, resonant sound.

Also boasting a Zeppelin provenance, the Sparkle kit aims to replicate the tighter‑sounding setup used on Led Zeppelin II, Houses of the Holy, Physical Graffiti and Coda. Meanwhile, the Black kit references Eddie’s work on the Rolling Stones’ Beggars Banquet album and these new recordings were made using some of the original Olympic Studios Helios console microphone preamps. The sound of this kit reflects Charlie Watts’ jazz influences. The Oyster kit also pays homage to the Beggars Banquet period of Rolling Stones history. Jimi Hendrix Experience drummer Mitch Mitchell played a somewhat jazzy‑sounding kit tuned a little higher than a typical rock kit and the Silver kit aims to replicate his sound from the Axis Bold As Love period. Both sticks and brushes were sampled. Referring back to that album, I think this kit pretty much nails that sound.

The presets cover a lot of ground, from big and beefy to tight and punchy, but all are deserving of their rock credentials.

Because SD3 offers sophisticated surround mixing options, the miking setup for these recordings was understandably extremely sophisticated with both mono and stereo overheads, four ambience mic arrays, front centre, front L/R and rear L/R setups augmented by close mics. Many of these were fed through Air Montserrat Neve mic preamps. Note that when a preset kit is selected that doesn’t use all of the kit pieces, the unused ones are greyed out but they can be brought back into play by selecting a new drum sound for them to use.

The presets cover a lot of ground, from big and beefy to tight and punchy, but all are deserving of their rock credentials. There’s also a library of genre‑specific MIDI grooves that can be assembled in the song construction section of the SD3 window or be dragged onto a DAW MIDI track. Eddie’s own selection of presets were put together at AIR and feature his own kit part preferences and mic mixes. If you’re an SD3 user this kit is a must for anyone interested in the more rocky side of production, but if you’re an EZdrummer user, check out Classic Rock.

As we’ve come to expect, both these expansion packs are excellent and in this case they really get close to the reference material they were based on.