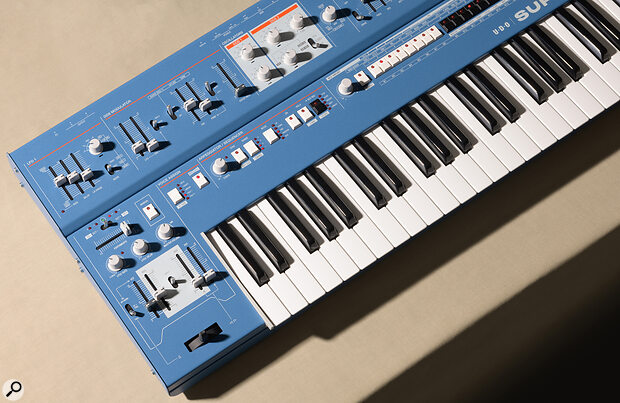 UDO Audio’s highly anticipated debut instrument is a synthesizer with a sound all of its own.

Anticipation for the Super 6 was palpable after its announcement at Superbooth 2019. It may be UDO’s first product but designer and company co‑founder George Hearn is not new to the industry, having previously been involved in the design of the Modal Electronics 008. Nevertheless, a flagship, 12‑voice polyphonic, binaural, analogue‑hybrid synthesizer is an audacious entrance for a start‑up company.

The Super 6 is designed with a firm philosophy. There are no screens and no menus. There is, mostly at least, a one‑knob‑per‑function design. It doesn’t do multitimbrality or have a software editor and it won’t connect to the internet. The design is proudly old school and more than a little inspired by early‑’80s Roland synthesizers like the Jupiter 6, with lots of vertical faders, tri‑position switches and clicky retro‑buttons.

The sound engine, however, is more modern. While it still follows many of the subtractive synthesis norms, there are a couple of headline features. The first is ‘binaural’ mode. Under the hood, the Super 6 has a true stereo signal path. When binaural mode is enabled, the 12 voices are paired to form six true stereo voices. Left and right signals get processed independently and this results in a wide, spacious, almost ‘record‑ready’ sound.

The second clear innovation is found in the two FPGA‑based oscillators. FPGA is fast becoming the norm in digital synthesis and replaces traditional DSP chips, which were often restricted to clock speeds of 48 or 96 kHz. FPGA can run clock speeds at magnitudes faster than these old chips, which means that the telltale aliasing heard in older digital synths is a thing of the past, even when performing complex audio‑rate frequency modulation. In short, these are digital oscillators with all the clarity and depth of analogue ones, and none of the instability.

In essence, the Super 6 represents a modern take on a classic polysynth format. There are two oscillators, two filters, two envelopes, two LFOs, a delay, chorus, arpeggiator and sequencer. There are presets too and even a mod‑matrix, but largely UDO have focused their modernisations on aspects that improve the sound.

The Super 6 is available in two colours; the blue exudes a casual demeanour, whereas the black (more of a medium grey in person) feels more business‑like. The 49‑key Fatar keybed transmits velocity and aftertouch and has a lightweight synth action with no annoying clacking sounds. The keys do overhang the main body by about a centimetre, so if you’re moving the keyboard a lot, you’ll need to take extra care not to chip or snap them. For playability, I think this might rank amongst the best synth‑action keybeds I’ve used. I’m less convinced by the combined modulation and pitchbend stick. It is of a similar design to those found in the Roland Juno series. The mod ‘wheel’ has a travel of just a few millimetres and is spring loaded, which means it has to be held in place to be active. Unlike the Roland versions which I’ve played (my SH‑101 has the same design), the resistance feels quite stiff. Occasionally the force needed to apply modulation would cause the stick to fly sideways, applying pitchbend when I didn’t want it. I’m sure, over time, the spring would relax and my playing technique would adapt, but I would have definitely preferred two wheels. 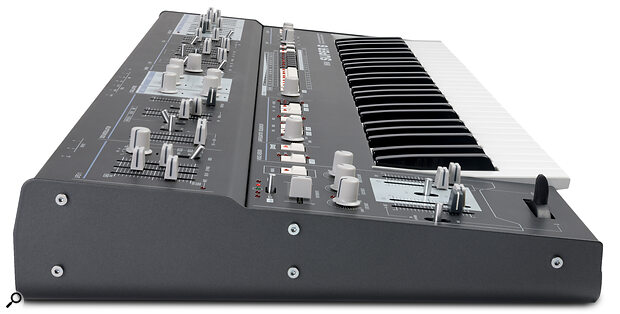 The Super 6 is also available in black (grey); appropriate for more formal settings.

The general layout of the front panel is logical and very well labelled. The raised top half of the panel is home to most synthesis parameters. The bottom half contains the voice setup, arpeggiator/sequencer, mod matrix, patch storage, and effects. The section above the pitch and modulation stick is home to LFO2 and routing options as well as portamento, the keyboard transpose switch and the ‘manual’ button. The manual button switches the Super 6 into a what‑you‑see‑is‑what‑you‑get mode where all the front panel control values are used at their current position; invaluable for learning, or for anyone who thinks patch storage is for wimps.

For everyone else, there are 128 patch storage slots, in 16 banks of eight. These are accessed with the two rows of white/black buttons found just above the keyboard. These buttons are also used for a multitude of other functions such as mod matrix, oscillator waveform selection, sequencer programming and a few setup options. By default, the synth comes loaded with 64 sounds, the second 64 are left empty for you to fill. Whilst 128 sounds doesn’t seem overly generous by the standards of many other modern synths, I think it’s fine. The Super 6 is a synth you’ll want to spend time actually programming, not...