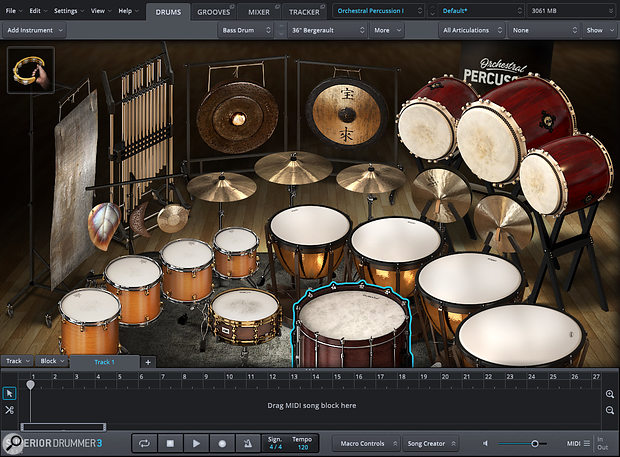 The US drum maestros take a decisive step into the world of orchestral percussion.

Think of Toontrack and you think of drums. The product names say it all: Superior Drummer, EZ Drummer, and before that, Drumkit From Hell and its devilish offspring DFH Superior. Since releasing Superior Drummer 2.0 in 2008, Toontrack have issued a steady stream of SDX and EZX expansion libraries for their Superior and EZ players and all of those reviewed on these pages received a warm reception from SOS's keen-eared writers, who know a good sampled drum kit when they hear one. 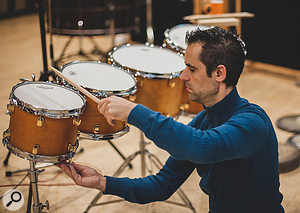 While the expansions cover all angles of the drum kit and Latin percussion, one area has hitherto gone unexplored: orchestral percussion. Realising with excitement that here was another large collection of things that you can hit with a stick, the Toontrack sound-design team returned to the main hall of Galaxy Studios in Mol, Belgium, the same location used to record the Superior Drummer 3 core sound library (and incidentally, the studio used for the spiffing Galaxy Steinway 5.1 grand piano).

For this project the company enlisted specialist help in the shape of producer Patrick Lemmens, a classically trained musician with a background in orchestral engineering and mixing. The instruments were played by members of the Ouderits family: dad Leo and sons Tim and Tom, all classically trained percussionists. This musical clan were united in naming the snare drum as their favourite instrument, which may have further endeared them to Toontrack.

The 'SDX' part of this product (henceforth referred to as OP SDX) stands for Superior Drum expansion, which means you'll need Superior Drummer 3 (SD3) in order to use it. The expansion library consists of over 120 instruments simultaneously recorded from multiple listening perspectives, enabling you to create anything from a simple stereo mix to an 11-channel surround extravaganza. (Full lists of instruments and mic positions appear below.)

In order to present its extensive content in manageable form, OP SDX is split into two volumes (not available separately), each with its own dedicated interface. Existing SD3 owners can purchase OP SDX as a sound expansion, while Toontrack newbies can buy SD3 and OP SDX together in Superior Drummer 3 Orchestral Edition bundle.

To keep downloads sensible, SD3's huge sound library is split into five parts. You can start out by downloading the 41GB basic library, which includes all instruments and articulations in three mic positions — though whether you download one part or all five, you still have to buy the whole shooting match. If your broadband can't cope, the full SD3 library is available on SSD hard drive. For more info on SD3, read John Walden and Mark Gordon's SOS October 2017 review on the SOS website.

SD3 (236GB) requires an additional 55GB for the installation process, while the OP SDX expansion (65GB) needs an additional 65GB — the player software (which must be downloaded) is a mere 320MB. If you're short of drive space, bear in mind that the basic SD3 install sounds absolutely fine — you can always download the additional mic positions at a later date. In any case, the cost of external drives continues to plummet, so maybe it's time to treat yourself to a SSD drive for your precious sound library data!

Time to take a listen to the main instruments found in OP SDX Volume 1, starting with the excellent timpani. Five Yamaha timps were sampled chromatically over an Eb1-Bb2 range using hard, soft and medium beaters. Dynamics range from a soft, portentous boom to a thunderous fortissimo which sounds majestic in Galaxy Studios' hall acoustic (on which note, the default mix of close, mains and outrigger mics is ideal). The timp articulations are limited to open and muted hits; if you need more options, the programmed roll performances available in the MIDI grooves folder (see below) sound super-realistic.

The five timpani are presented at set pitches within the default all-in-one MIDI mapping, but dedicated presets in the stereo and surround preset folders map them chromatically over their full range. In fact, timpani are the only instrument in OP SDX with a dedicated patch; when it came to the tubular bells, Toontrack squeezed their full C4‑F5 chromatic range into the default mapping. These chimes sound magnificent, and due to the hall's acoustic isolation (more on which below), they ring on for an insanely long time with no extraneous noise spoiling the die-away. You can curtail the decay at any point by pressing a 'mute tail' silent MIDI note, a feature also implemented for the timps and other sustaining instruments.

The single orchestral bass drum in OP SDX, a large 36‑inch model made by the French company Bergerault, emits a massive thump capable of scaring the living daylights out of your listeners. Three taiko drums also blast out superbly beefy and resonant loud strikes, abetted by four battering rock toms — get this lot going in an arrangement and no-one will accuse you of turning in an under-powered mix. 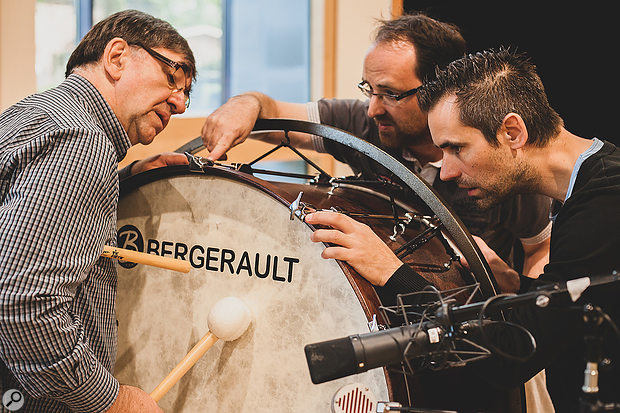 All the orchestral snares sound crisp and cutting, though I'd be inclined to reserve the doomy field drum and papery, high-pitched marching band model for special occasions. A generous set of snare articulations includes straight stick, brush and felt mallet hits, rimshot, sidestick, flam, drag/ruff and played crescendo and diminuendo rolls. The piatti cymbals splash triumphantly, and three suspended cymbals (one of which is a handsome-sounding Wuhan Chinese model) provide a symphonic alternative to SD3's seemingly endless list of drum kit cymbals.

The low end is covered by an explosive 36-inch tam tam gong (which also turns in some good scary effects), with exotic backup from a set of Indonesian large bossed gongs. From their approximate pitch, I'd guess these hail from Bali. Less exotic is the good old theatrical thunder sheet — dial up overdrive and distortion effects (see below) and you can turn its bashy theatrical sound into something more cataclysmic. A set of noisy, high-pitched Peking opera-style gongs (which bend up a semitone or so when hit) need no such help; absolutely deafening in real life, they're a good racket for scaring off marauding wildlife.

OP SDX Volume II is dedicated to smaller drums and hand percussion. Songwriters and producers will appreciate the classy, beautifully recorded congas and bongos, and if you're in the groove-making business, tambourines, shakers, maracas and cabasa all offer essential on- and off-beat shakes. These tambourines are not the skinless rock/pop-type menacingly brandished by Liam Gallagher, but you can always borrow one of those from the included SD3 library. 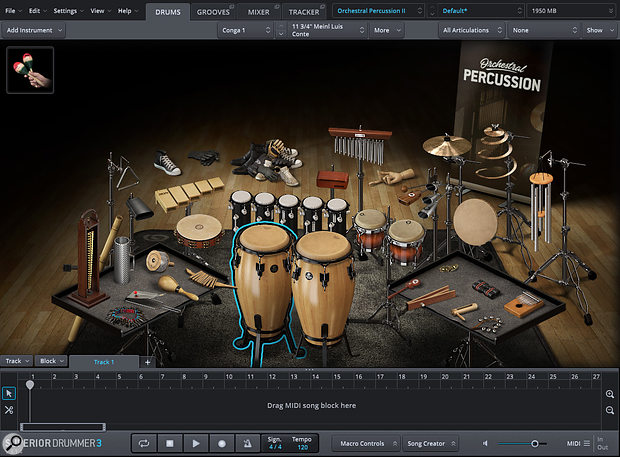 Other Latin perc staples include cowbells, triple agogo bells, a lovely bell tree, silvery mark trees (aka bar chimes) and some very pretty-sounding triangles ideal for decorative 'tings' or playing a light eighth-note groove. I enjoyed the light industrial sound of the spiral cymbal, a metal impact followed by a hissy, 'escaping gas' decay, and figured the anvils might come in handy for heavy metal tracks. My ears also pricked up at the mention of boobams (long, tubular one-headed drums played by master drummers Gavin Harrison and Bill Bruford), but this particular set sound a bit thin and tonally dry.

Nestling alongside standard orchestral temple and wood blocks are less common items such as the 'whip' (a clacky handheld device made of two pieces of wood which bash together when shaken) and binzasara, a small Japanese rattle consisting of corrugated wooden slats and two handles. You can chill out after a hard day's work at the meat packing factory by listening to the hypnotic tidal swoosh of the ocean drum, before dozing off to the rainstick's slow pour of seeds cascading down a hollow stick. In a similar relaxing vein, the soothing peal of the metal and bamboo wind chimes made me feel right at home, as I have two near-identical instruments hanging in the hall outside my music room!

It sounds absolutely great, and has to be rated among the best percussion collections currently on the market.