Due to the skilful programming and large number of velocity layers, the patterns sound amazingly lifelike and dynamic: you'd never know that (for example) a snare crescendo roll isn't a real-life performance, so if you like their musical effect, you can insert these MIDI grooves straight into your arrangement. While you can use SD3's Song Track and Grid Editor to sequence, merge and edit pattern data (including isolating individual instrument components), some composers may prefer to export the patterns as MIDI files and mess with them inside their DAW. 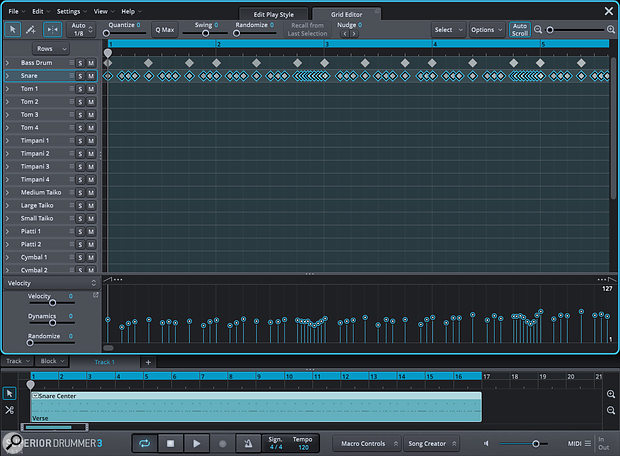 You can use the Grooves page to sequence, merge and edit the library's MIDI patterns. 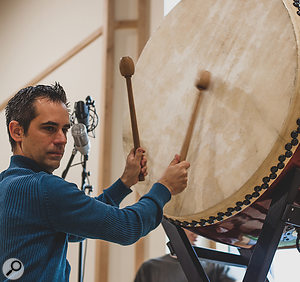 Tim Ouderits doing what he does best.The Superior Drummer 3 interface is a sophisticated affair jam-packed with features and settings. Having spent a few days grappling with some of its more enigmatic workings, I can see why a demand arose for the simpler EZ Drummer! That said, once you've figured it out, SD3 allows you to customise your setups to a far greater degree than most Kontakt libraries, which nowadays are increasingly likely to be locked for editing.

An immediate difference with Kontakt is there's no on-screen keyboard: instead, you click on an instrument's picture on the GUI to hear it. Right click, and you'll see its name and stick or mallet type — in the case of instruments like the snare drum you can select a different model, whereupon its picture obligingly changes. Childish though it may seem, it was at this point that I began to enjoy Toontrack's colourful interface.

Finding the right sound is made easy by the 'Search for Instrument' window, which contains a set of filters enabling you to search by library and instrument type. You can view all the available articulations for an instrument and click on them to audition — a fast, efficient system. Once you've selected the artic you want, assigning it to a MIDI note is more cumbersome: you have to open a MIDI mapping property box (I'm glazing over already), open the artic's drop-down menu, select 'Learn', then press the desired key on your MIDI controller. All a bit of a palaver.

Features such as sample reverse and pitch envelope are handy — the latter can be very effective if used subtly, or amusing if applied excessively. You can re-tune individual instruments over a wide pitch range, but then you have to hit 'process' to make the new tuning permanent (a new one on me).

Though this library sounds great straight out of the box, you can wreak havoc with the built-in effects. There's something delightfully perverse in destroying such pristine sounds with Big Muff fuzz and down-sampled bit-crush effects. I enjoyed adding the '1981 Classic Echo' and chorus effects to OP SDX's thundering bass drum; maxing out the echo and hitting the 'reverse' button produced a great, shuddering aerial bombardment sound effect which would slot nicely into a War Of The Worlds-type soundtrack. Then I went over the top and added the 'green distortion pedal' effect, before being dragged away by men in white coats.

The mixer (which includes an elaborate effects section) has a separate channel for each instrument.

As mentioned earlier, an important difference with standard orchestral percussion libraries is that with the exception of the timpani, no separate instrument patches are provided: all instruments are crammed into a 127-note keyboard mapping, so if you want (say) a cymbals-only patch, it's up to you to create it. This approach reflects Toontrack's all-in-one drum kit mapping pedigree, but I've a feeling that may have to change if the company continues to move into the realm of pitched instruments.

Despite having spent the last 17 years spawning more virtual instruments, expansion kits (52 at the time of writing, with more in the pipeline) and MIDI groove collections than you can shake a drumstick at, the Toontrack juggernaut shows no signs of fatigue, metal or otherwise. From rock, pop, folk and country to Latin, electronic, jazz and big band, these guys can fairly be said to have covered all the main drum kit bases in enormous depth.

Orchestral percussion is a new feather in the company's cap, and a significant development: too large and comprehensive to be written off as just another expansion kit, Orchestral Percussion SDX is really a fully fledged library in its own right, albeit one that needs Superior Drummer 3's software to run it. If you already own SD3, acquiring this excellent collection will enable you to raise your game and add world-class percussion to your MIDI orchestral arrangements. However, if you're new to the Toontrack experience, you'll need to buy the full SD3 Orchestral Edition bundle, which I fear may be beyond the budget of some.

Financial considerations apart, I'm happy to say the musical, sonic and technical qualities of Toontrack's Orchestral Percussion SDX expansion library are of the highest order — to put it more plainly, it sounds absolutely great, and has to be rated among the best percussion collections currently on the market.

Other large-scale, multi-miked orchestral percussion libraries with a similar instrumentation include EastWest Hollywood Orchestral Percussion, Vienna Synchron Percussion I (which includes Auro 3D 'height' mics), Orchestral Tools Berlin Percussion and Cinesamples CinePerc. All contain chromatic mallet instruments (such as marimba) not found in OP SDX, but to the best of my knowledge none of these alternatives include MIDI grooves.

Silence is a rare commodity. It can temporarily be obtained by oblique strategies — for example, getting a guitarist to stop playing by putting sheet music in front of him — but mostly we live amidst constant clamour and racket. On the face of it, a room full of noisy percussion instruments is the last place you'd look for a bit of peace and quiet, but surprisingly, silence is an important feature of this library.

In an effort to banish sound leakage, the entire Galaxy Studios complex is built in concrete bunkers resting on industrial-size metal springs, thus achieving acoustic isolation from the outside world. Toontrack claim that the measured insulation value of over 100dB between adjacent rooms makes the studio's main hall the quietest recording space of its size in the world. This means that the long, lingering trails of a ringing tubular bell and the tiny 'ting' of a pianissimo triangle hit can be left to die away to silence with no fade, the only risk of interruption being an inadvertent noise made by the player.

If you fancy a virtual visit to this hushed space, there's a nice 360-degree tour at www.galaxystudios.com/360/galaxyhall — better turn your phone off first, though.

Each preset loads with the Close, Mains and Outrigger mics activated: the latter feels like listening from the back of a concert hall, while the spacious-sounding Mains is a good go-to option for orchestral mixes. Pop producers will probably prefer the Close miking for parts such as shaker, tambourine and hand drum loops. In addition to these three principal positions are the standard 5.1 surround channels (presented as Front L/R, Front Centre mono and Rear L/R), and a 'Height Surround' option which adds two pairs of 3D 'height mics'. There's also a basic stereo mix which can be used to conserve system resources.

As past SOS reviews attest, Toontrack already nailed sampling drum kits; now they've done an equally meticulous job sampling over 120 orchestral percussion instruments in a great recording space from multiple mic positions. Though you need Superior Drummer 3 to run it, Orchestral Percussion SDX stands on its own two feet as a sound library, and though the sophisticated interface takes time to learn, the excellent sound, dynamic range and musical expressiveness of the instruments justifies the learning curve.