We check out four pedals that emulate classic amplifier types.

The guitar pedal market is awash with overdrives and there’s no shortage of preamp devices that purport to emulate specific amps either, but for their new range of Valvenergy pedals Vox have tweaked the recipe. This series of compact overdrives emulate the tonal characteristics of specific amplifier types, and have switchable modes to allow them to be used in one of three ways: as drive pedals, as preamps feeding into a power amp/loop return, or as DI solutions complete with speaker emulation.

The whole signal path is analogue and in bypass mode the pedal output is buffered, to side‑step the issue of tone loss in complicated pedalboard layouts or when driving long cables. Battery power is possible but these pedals also have a standard 9V input socket and consume 95mA. As with many current Vox guitar products, each one of these pedals employs a Nutube valve in the signal path. These miniature triode valves were developed by Korg Corporation in conjunction with Noritake Itron Corporation, and are a spin‑off from vacuum fluorescent display technology. Here, they’re used to accurately convey the response and harmonic distortion of a valve amplifier. 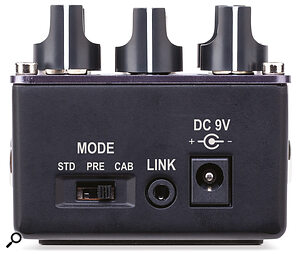 The pedals can operate in one of three modes. The Pre mode is intended for patching into an amp’s effect loop return, while Cab applies a cabinet/speaker emulation to the output.In the middle of the top panel of each pedal, a small display shows the current mode setting whenever the pedal is activated; the mode is selected via a rear‑panel slide switch. After a very brief interval, the screen switches to an oscilloscope view, displaying the waveform of the pedal’s output. This can be disabled if you find it distracting but I thought it was rather cute! A red strip along the top of the display shows when the pedal is active, and when you hit the footswitch to bypass the pedal the display indicates Bypass for half a second or so.

Another novel feature is the provision of a 3.5mm Link TRS jack on the rear panel. The idea is that you can link multiple Valvenergy pedals, such that you can switch between them with a single stomp: whenever one is activated, the others are automatically bypassed. (If you need to link more than one extra pedal, a splitter cable is required.)

Although all four of the pedals have similar control layouts, they’re not identical. For example, rather than offer just drive, volume and tone, the Mystic Edge, of which more later, actually has a more comprehensive EQ section than the Vox AC30 amp that it sets out to emulate, with separate Bass and Treble controls plus a Tone Cut knob that interacts with the treble control to shave off the high end. The layout for the other pedals in the series sees the Tone Cut knob replaced by a mid EQ control. In the case of the Cutting Edge pedal, the Bright switch is replaced by a knob labelled Tight, which is designed to shape the low end, adding depth when it is turned anti‑clockwise or slimming out the bass when it’s turned clockwise.

First out of the box was the Mystic Edge, which fittingly enough recreates the classic Vox AC30 sound. Its drive range goes from an almost clean jangle to rock, and the Bright switch delivers more edge, rather like an AC30 top boost model. Fed into the clean channel of my Roland Blues Cube amplifier, the result was very convincing, with plenty of drive in hand when needed and a distinctively Vox‑like rude edge to the sound. Play a couple of early Kinks riffs and you’ll recognise the sound immediately.

I’m not usually a fan of DI’ing driven guitar sounds, but with these pedals I think I could make an exception.

The Cutting Edge is designed to recreate “high‑gain US sounds”, so probably channels more than a little Mesa Boogie spirit, though it also handles cleaner sounds very well, going from a mild crunch to full‑on rock, with that extra bite that the originals are famed for. The Copperhead Drive recreates the classic British stack amp tone, which is no doubt based on a vintage Marshall setup, and runs from very lightly overdriven sounds to heavy distortion, delivering that slightly scooped, thick tonality for which the original amps are famed. This really nails the essence of the UK rock guitar sound, but it cleans up pretty nicely too. The Silk Drive aims for a smoother, boutique‑style vibe, offering less aggressive drive, a smoother top end and good note definition, making it well‑suited for blues and pop styles.

While each pedal has its own character that recalls the spirit of the amplifier after which it is voiced, the four models do have a lot in common, such as the ability to respond well to picking dynamics and to handle higher gain settings without losing note definition; you can go from fairly clean to a rock‑out overdrive just by varying your picking strength and/or using your guitar volume control. The Pre mode works well for feeding the pedal into an amplifier’s loop return point, while, should you want to go direct, the Cab mode adds a speaker emulator.

To my ears, the speaker emulation sounded a little thin at the low end, but further adjustment of the EQ controls improved that and it is certainly very usable. By using these pedals in Standard mode and then adding a Celestion IR‑based speaker emulation (via a plug‑in), I was able to recreate some extremely believable miked amp tones, with a convincing sense of low‑end girth. I’m not usually a fan of DI’ing driven guitar sounds, but with these pedals I think I could make an exception. You just need to add a hint of room ambience to complete the illusion. Given their tonal abilities, these pedals are realistically priced and still pleasingly compact. The only real problem is likely to be deciding which one to buy!

An impressive set of amplifier-voiced drive pedals that cover plenty of ground, from the almost clean to the seriously dirty.

Valvenergy Pedals £169 each including VAT.