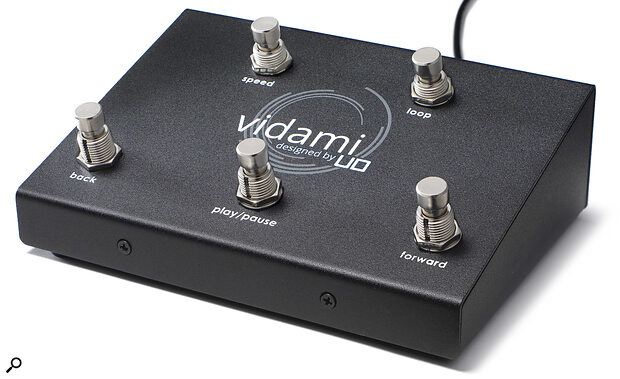 Want to set loop points on YouTube video tutorials and control their playback? This device does just that...

One of the greatest benefits of YouTube to musicians is the availability of a seemingly never‑ending stream of free, high‑quality, instrumental and vocal tuition videos, covering a variety of styles, genres and instruments. To help musicians learn, YouTube has implemented keyboard shortcuts that allow you to slow down a video by up to 75 percent without changing pitch, and to skip backwards and forwards along a timeline in single‑frame, 5s and 10s increments. Helpful as that is, having to move at least one hand from instrument to computer in order to control the video can still interrupt the flow of the learning process. In addition, YouTube’s lack of the facility to loop a user‑specified section of video remains a big omission — from any learning musician’s perspective, at least.

First introduced in 2020, the Vidami online video loop pedal is manufactured in the US by the family‑owned company Utility Design, and was designed as the one‑box solution to those two problems. An update of the company’s original Rep pedal (which was created and developed by the family’s youngest son), the Vidami is a patented five‑button USB footswitch that, when combined with its bespoke Chrome and Safari browser extension for Mac and Windows computers, delivers not only floor‑based foot transport control of videos on YouTube and a growing number of other online platforms, but also the ability to set loops between any two points on the timelines of those videos.

The Vidami’s front row of three momentary footswitches provide transport control, the centre switch allowing you to play or pause the video, and the outer two skipping playback forwards or backwards in 5s increments. Of the two switches on the rear row, successive presses of the one on the left steps the video playback speed from 100, through 75, 50, 35, 25 and back to 100 percent. Similarly, a single press on the rear‑right switch sets the loop’s start point, a second press sets its end point, and a third press clears it.

The browser extensions are free downloads from the Chrome and Safari stores. Once the extension is installed, you simply plug in the Vidami pedal, open a compatible video platform and you’re good to go. In addition to YouTube, Vidami‑compatible major online video sites include LinkedIn Learning, Truefire and Vimeo, as well as a growing number of popular guitar‑focused tutorial sites.

The Vidami pedal has transformed my video‑learning experience, exactly as I’d hoped it would...

Simplicity itself to use, the Vidami pedal functions exactly as its designer intended. Personally speaking, using the Vidami pedal — in conjunction with other useful keyboard shortcuts (eg. single‑frame advance and reverse) — has transformed my video‑learning experience, exactly as I’d hoped it would when I bought it. Being able to navigate quickly to the desired point in a video using a mouse and/or keyboard shortcuts, and then using the Vidami pedal to define, loop and change the playback speed of a section as required, gave me a powerful suite of tools that have markedly accelerated my learning and transcription processes.

Whilst the Vidami pedal’s price means it arguably isn’t an impulse purchase, it’s been a more than worthwhile investment in my future learning — and in my view, that makes it a bargain.