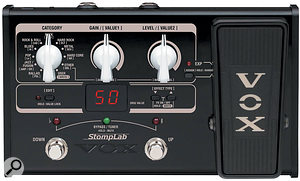 The Vox StompLab IIG offers a selection of modelled guitar multi-effects, based on 104 model types (44 of which are amp emulations). These can be combined in permutations of up to eight models at a time, and there are 100 preset sounds (10 banks of 20) plus one bank of 20 user-programmable sounds. Conversion is 24 bit, and the DSP technology is derived from that used in Vox's VT-series amps. User control is via two footswitches (for patch up/down selection; hold both for the tuner), a mini expression pedal and three rotary controls (Category, which acts as a bank selector, Gain and Level). Just four buttons gain you access to the patch editing, where you can create user programs. The factory presets are grouped into banks of genres, from ballads and blues to extreme rock and synth-like filter and pitch-shifted effects. A guitar tuner with simple 'flat', 'in-tune' and 'sharp' LEDs is included, and this can be set to automatically mute the output while tuning. Power can come from AA batteries or an optional AC power adapter. The battery life is just a few hours, making external power the best option, but I'd recommend spending the extra few pounds on the correct Korg PSU unless you already have a beefy pedalboard supply — my standard small Boss PSU wasn't up to the job (I suspect it simply couldn't provide enough current).

The sound-processing modules are designated as pedal, amp, drive, cabinet, modulation, delay, and reverb effects, and there's a gate/expander noise reduction too, to keep the more extreme sounds quiet when you're not playing.

Each effect type allows access to one adjustable parameter, but as the display has only two eight-segment indicators you may want the handbook handy to decrypt the abbreviations! In addition to the usual effects you also get a ring modulator, octave effects, pitch shift and a whole selection of fuzz and distortion devices. I particularly liked the modulation and delay effects, but most effects don't sound that different from many competing products, and the pitch effects still exhibit the characteristic graininess of most budget pitch-shifters.

The Stomplab IIG is capable of a very wide range of guitar tones, but I'd recommend taking the time to build your own patches, as many of the presets are just a touch unsubtle. I also felt the output sounded just a little gritty on the dirtier sounds when heard through studio monitors, though to be fair it sounds much better when played through a less hi-fi PA system or a clean guitar amp. Juggling the StompLab IIG's various cab emulations can also help, and in the studio you can of course put a software speaker cab emulation on the track to finesse the sound.

The rugged metal housing is robust and things are ergonomically set out, even though the tiny pedal may take a little getting used to. Still, it will fit easily onto a pedalboard or into a gig bag. Depending on the preset, that little pedal can be used to control the likes of wah, volume, pitch sweep and modulation rate. Headphones can be plugged into the main output, which can be used in mono or stereo. The compact format, the breadth of effects on offer and the low cost is definitely an attraction, while for recording applications the lack of latency might appeal — though most of the effects on offer here could be replicated perfectly well using software amp and effect modelling plug-ins. Live performance or bedroom rehearsal is where this pedal probably scores the highest. 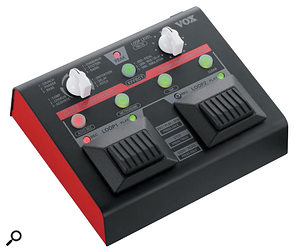 Billed as a looper with multi-effects, the Lil' Looper is designed to offer easy-to-operate looping for either guitar or vocals (switchable high-impedance or balanced mic-level jack). Up to 90 seconds of memory is available, and is shared between two independent loops, with no single loop able to exceed 80 seconds. There's no way to extend the memory, which would have made the unit rather more attractive, but then this is intended to be an affordable offering. Overdubbing on top of existing recordings is possible with very welcome Undo/Redo functions, so old-school sound-on-sound recording means you can heap on an indefinite number of layers. These functions are accessed by pressing and holding the pedal. Having the ability to record two independent loops, each accessed via a separate footswitch, allows loops of different lengths to be layered, and if you press the Loop 2 pedal while Loop 1 is being recorded, Loop 1 will switch to playback and Loop 2 will start recording. Four status LEDs show the record/play status for the two loops. The user can set whether the two loops are always sync'ed or whether they run independently.

An Auto Rec mode can be activated via one of the five illuminated panel buttons so that recording starts automatically when you start playing. Tap lets you set your own tempo for the metronome while Clear clears the loop memory. Switching from 'record' to 'play' to 'overdub' requires only a single switch press, while a double press will stop playback. It's also possible to connect an optional VFS2 footswitch to turn effects on/off, stop loops, or to erase a recording. Loop recordings are lost when the unit is powered down.

If you're worried that your timing isn't up to accurate looping, a loop-quantise feature (which becomes active whenever you switch on the metronome) syncs your loops to the nearest beat, and also allows both loops to be sync'ed to the same tempo. It's also possible to output the metronome only to the headphone jack so your audience doesn't hear it.

There are several effects besides the basic looping: there's the usual overdrive, modulation and delay-based effects, of course, but these are joined by stutter, radio emulation and acoustic guitar emulation. The leftmost knob selects and adjusts one of four effect types and the button between the two knobs (which changes colour according to mode) switches the effect type from pedal to mod delay to emulation. Loop level is set relative to the live input using the rightmost control. Loops are recorded with effects, so you can change effects between layers to create a more complex composition. This would be difficult to do live, because of the need to stop playing to tweak or change the effects, but it could be useful in the studio.

My only real reservation is the limited recording time, but other than that the Lil' Looper does a good job in offering more flexibility than basic loopers but without being too intimidating. The effects work well for building more complex layers and those large pedals make controlling the looper easy. Paul White