With the latest version of EZmix, Toontrack are offering ready-made guitar sounds and master bus processing as well as a huge range of mixing presets.

Toontrack's EZmix, reviewed in these pages back in December 2010 (/sos/dec10/articles/plug-in-folder-1210.htm), is a largely preset-based plug-in intended to make it easy for inexperienced engineers and musicians to buff their sources into shape at the mix. EZmix 2 builds on the paradigm of the original EZmix, but with a new interface, additional mastering presets and the addition of amp and cabinet modelling. A very low-latency stand-alone mode allows guitarists to take full advantage of these without distracting delays. There are also numerous preset expansion packs available, some of which are dedicated to particular genres or instruments, while others are 'celebrity' packs developed with the aid of well-known engineers such as Chuck Ainlay and Mark Needham. These are added by running their installer, then authorising them when you next use EZmix 2 — which is itself authorised online at the Toontrack web site.

The central feature of the new interface is a browser, which breaks down the various presets according to criteria such as instrument, placement in the signal chain, effect type and musical genre. You can also search for terms of your choice, if you can't find what you're looking for directly. The various categories are broken down into multiple preset types where, for example, the drums section might offer different treatments suited to snare drums, kick drums and overheads. Some presets are designed for use as inserts on tracks, buses or master buses, and others for send/return operation. The Browser and Preset Filters section includes a favourites section to which you can add presets that you use regularly. Any tweaks you've made to the controls are stored with your favourite, though the original preset will remain unchanged, even if you keep the same name.

Each preset uses one or more individual components from the 'building blocks' available, which comprise guitar/bass amps and cabinets, chorus, phaser, flanger, rotary speaker, compressor, gate, de-esser, delay, reverb, distortion, EQ, exciter, octaver, stereo width enhancer, tape simulator, tremolo, vibrato and wah. Images for all these devices are shown in shadow to the right of the screen, and when you load a preset, the ones that are used are lit up. However, there's no direct control over the settings of any of these devices. Instead, the super-simple control panel beneath the browser presents just two effect control knobs — which often control multiple parameters simultaneously — and two further knobs for setting the input and output levels.

The Controls section includes two information windows that relate to the two main adjustment knobs, telling you what the knob does in the currently selected preset, in non-technical language that is intended to be meaningful to musicians not versed in engineering jargon. If you park your cursor over the info area, further information will appear explaining what different effects the knob controls, where multiple processes are involved.

The functions of the two knobs varies quite a bit depending on the preset. Sometimes they simply give you more or less of something (or a combination of somethings), while in other presets, they may emphasise a different effect at each extreme of the range with various blends in between. Sometimes the right control knob is used as a wet/dry mix control, or it might not even be used at all. Either way, there's no deep edit mode to get at the separate parameters directly, as the whole ethos of EZmix is simplicity of operation. 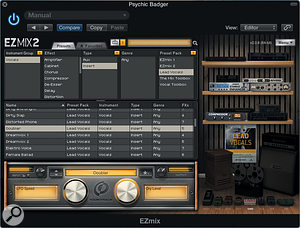 control, which you'd normally set to 100 percent wet for use in an aux bus. The input and output gain controls both have level meters, so it is easy to maintain a healthy signal level without overcooking the signal, and all the controls, including input and output levels, can be automated in the host DAW.

Although the new version looks quite different, little has changed about the way EZmix 2 operates compared with the original, which is a good thing given its simplicity. Clearly, its powers have been developed further 'under the hood', though, and the new separate input and output level controls are very welcome. I wasn't quite sure what to expect from such a simplified interface, but working with EZmix 2 turned out to be a bit of a guilty pleasure, and had me wondering what it might be like to try to pull off a Mix Rescue using nothing else! One thing to be wary of is that when the processor is switched in, the source immediately sounds bigger and more full-on, but this is often because many of the presets increase the apparent level when first called up. The only way to be sure that your choice of preset is doing the right kind of thing is to first balance the levels so they're subjectively the same with the plug-in switched in or out.

The instant gratification aspect of EZmix 2 is appealing, but when exploring some of the vocal treatments, including those supplied as additional expansion packs, I often found it frustrating that I couldn't adjust the overall amount of compression, where the controls were dedicated to the likes of delay and reverb. There are also occasions where you may benefit from putting two instances of EZmix 2 in series (or one insert effect and one send effect) — for example, you might want to use one preset to handle the dynamics and EQ, with the other used to look after overt effects such as delay and reverb.

The down side of EZmix's simplicity is that those who know what they want from their effects and processors may well feel frustrated by the restrictive nature of the controls. Personally, I often felt that having four effect parameter knobs rather than just two would have given me the flexibility I needed without making the product over-complicated. As an example, a vocal processor might benefit from separate knobs for dynamics, tonal colour, effect tweak (reverb/delay balance, perhaps) and effect level. I would also have liked to see a gain-reduction meter for presets that include dynamics processing: ears can get tired, but meters never do! A switch to lock/unlock delay tempos to the host DAW tempo would also have been useful.

As it stands, though, EZmix 2 makes it very easy for less experienced recording musicians to come up with a 'produced'-sounding mix very quickly, even to the extent of having presets with parallel compression built in, which many novices find difficult to master. For the more serious user, I think the restrictions often outweigh the convenience, but EZmix 2 was built for musicians, not engineers, and you really can't knock what it does when you take into account its target market.

EZmix 2 does exactly as claimed for its intended market. It gives those musicians with less studio experience the ability to add a professional-sounding polish to their mixes. The expansion packs also increase its scope for relatively little extra cost.