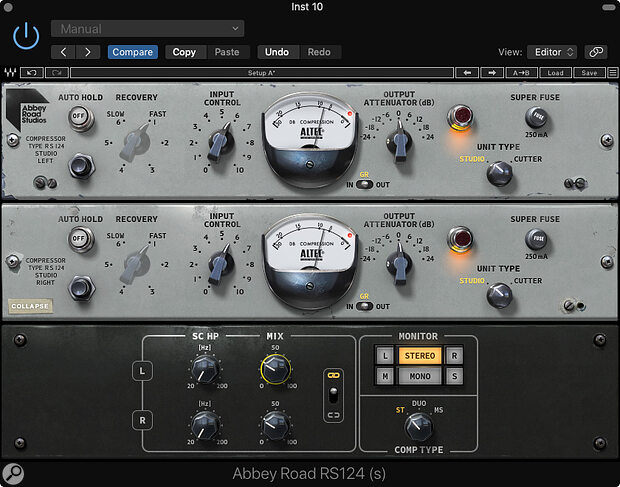 Abbey Road Studio’s tech team have a long‑standing reputation for making extensive modifications to off‑the‑shelf equipment. This was famously the case with the Abbey Road RS124, which was based on a much modified Altec 436B valve compressor, and built back in the days when studio outboard smelled of toasted Bakelite and gently cooking transformer windings. These custom RS124 compressors saw extensive use at Abbey Road Studios during the 1960s, where Geoff Emerick reportedly used one for punchy bass sounds while Ken Scott liked their effect on guitars and Norman Smith favoured them for their glue‑like mix‑bus abilities.

But RS124s were also used on occasions for mastering in Abbey Road’s cutting rooms. Apparently the compressors were employed on pretty much all the Beatles classics, often by dialling in a lot of gain reduction. Though they’re officially antiques, Abbey Road still use their hardware RS124s. Only around 25 units were ever made, all hand‑built by Abbey Road’s Bill Livy, Len Page and Mike Bachelor. Even fewer left Abbey Road!

The RS124 is what is termed as a feedback compressor — the output signal rather than the input is used to control the gain reduction stage, and as with many examples of vintage kit, no two RS124s sound exactly the same. Some even had intentionally different attack/release times, due to further switching of components, making them better suited for mastering duties, so no emulation would be complete without representing both types.

To account for differences in the original units, this Waves emulation (a Waves V12 plug‑in, so requiring a graphics card that supports Metal) is based on two distinct RS124 variants of the original hardware: the Studio version (serial number 60070B), which was popular for tracking; and Cutter, which was modified to have slower attack and release times for use in Abbey Road’s cutting rooms during the 1960s. This gentler variant also works well for bus compression and mastering.

Needless to say Waves have introduced DAW‑friendly niceties such as stereo and M‑S operation, variable 20 to 200 Hz low‑cut side‑chain filters, and a wet/dry mix option. Also not found on the original is the Super Fuse mode, which matches the release time to the attack time, to create a more brutal compression that can work particularly well on drums whenever a more overt type of compression is needed. In Super Fuse mode the Recovery time control is disabled.

When used in stereo, the GUI presents the two compressors one above the other (shown above) and, using the drop‑down panel below the two compressors, their operation may be linked, set independently or used in M‑S mode. There’s no adjustable attack on these compressors, though there is a switchable Auto‑Hold (to avoid excessive compression during pauses) and a six‑position recovery speed control that affects the release time. The Input control sets the amount of compression, shown by the moving‑coil‑style meter, which can also be switched to show In or Out levels, while a variable output attenuator adjusts the compressor output level. A simple switch selects between Studio and Cutter variants of the compressor.

Indeed these two compressors seem to improve the sound of just about anything you might care to throw their way...

In my tests, I found that both incarnations of the compressor worked well to add body and weight to mixes without introducing any obvious pumping effects, with Cutter mode sounding the most ‘creamy’ and very capable of delivering silky‑smooth vocal, instrument and mix compression. Studio mode is great for making drums sound more assertive or for adding energy to instruments or vocals in a very musically sympathetic way. Indeed these two compressors seem to improve the sound of just about anything you might care to throw their way, though use the Super Fuse mode with caution as it can make things sound very gnarly and often works best when mixed with some of the dry signal.

I’ve tried a lot of compressor plug‑ins and in most cases they do the job but at the same time you get the feeling that you could switch to a different compressor plug‑in and get much the same result. This one is a little different: it exudes vintage class and is just as happy being subtle and cuddly as it is putting the boot in. It also manages to sound as though it remains in full control of the proceedings even when a lot of gain reduction is applied — at such high gain‑reduction settings, many lesser compressors seem to treat your audio as a punch bag. I can appreciate why the originals remain so popular and I can see this plug‑in version making a lot of friends.