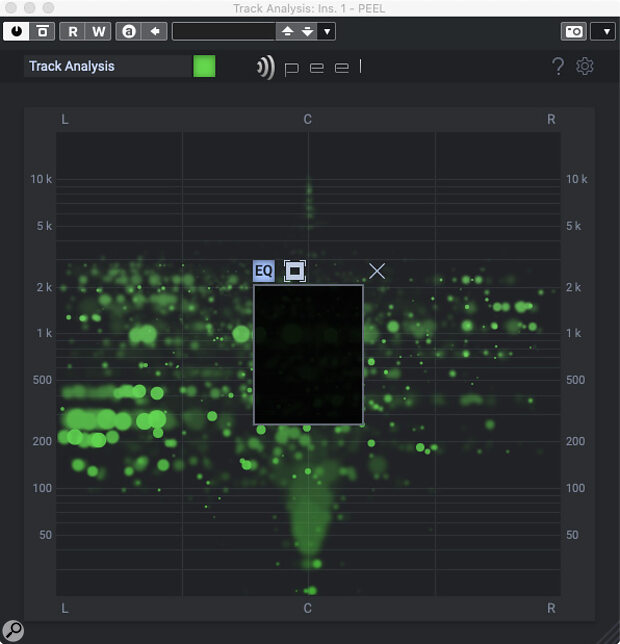 Ever wished you could pick individual sounds out of a stereo signal in real time? Now you can...

When I reviewed zplane’s deCoda (SOS November 2020), I speculated whether the company might further exploit the potential of its Focus Mode options, and their latest release, PEEL, which is available for Mac and Windows in the usual formats, does just that.

Before you even use it to isolate any sounds, PEEL is a very useful audio visualizer. Used as an insert on any audio channel, the main display maps in real‑time the energy in the audio signal on spatial (horizontal) and frequency (vertical) axes. It’s similar to the Multipanorama option in Cubase’s new Supervision audio analysis plug‑in, but I found PEEL’s display easier to interpret. You can instantiate multiple instances in your project and colour‑code the display of each, so you could use it for exploring masking or to visualise the differences in an audio signal before/after a processing signal‑chain.

But PEEL is capable of far more than metering alone. You can draw (and then resize or move) a rectangular box on the X‑Y stereo‑frequency display and then toggle of the box’s contents between solo and mute. This has all sorts of applications, from focusing your listening on a particular part of the audio to attempting to isolate a musical element. You can also route the audio within the defined stereo/frequency range to another audio track, which allows you to use your DAW to process the soloed and muted parts of the signal separately. This split audio routing isn’t fully supported by all DAWs at present (the compatibility or otherwise of most DAWs is listed on zplane’s website). But if yours doesn’t support it, the workaround is simple: just duplicate your audio track once your stereo/frequency range is defined and then toggle the two instances of PEEL to opposite mute/solo states.

It’s not difficult to see PEEL’s potential; there are lots of creative ways it could be used...

It’s not difficult to see PEEL’s potential; there are lots of creative ways it could be used in mixes, remixes and even, conceivably, live performances. The rectangular selection range means that isolation is rarely perfect; sounds in a mixed signal usually have overlapping elements in terms both of frequency and stereo spread. But used with care you can, for example, still tweak a vocal level within a full mix without lots of nasty side effects, and the isolation is certainly good enough that you can use PEEL to separate out a vocal or, say, a snare drum, to feed effects like reverb or delay.

There’s also some scope for zplane to build further on PEEL in the future. For example, the options to send audio from multiple audio tracks into a single instance, with each displayed in a different colour, would make this a wonderful tool for visualising masking. Equally, if in addition to the mute and solo toggle for the defined rectangle, you could also adjust the gain up/down, this would make it a doddle to tweak a vocal level by a dB or two in an existing mix. Oh, and it would be cool if you could define your chosen stereo/frequency space more precisely with a freehand drawing tool too! Maybe those things will come in time but PEEL v.1 is already a very cool utility plug‑in.

While PEEL doesn’t offer the sophistication of dedicated stem separation processors (as in the latest versions of iZotope RX and Steinberg SpectraLayers), it’s less expensive, operates on real‑time signals, and is super‑easy to use. The trial version allows you to try before you buy, but it’s very accessibly priced anyway, and I suspect PEEL will hold appeal for many.