MIDI-to-CV converters have been around for long time in one form or another. The Poly 2 brings the concept up to date with a host of features like polyphony, MPE compatibility, USB hosting, scale quantising and even presets, all designed to get your MIDI gear chatting happily with your modular with a minimum of fuss. 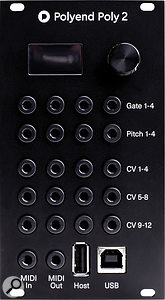 Polyend Poly 2. Size: 14HP. Current: +12V 160mA, -12V 14mA.The Poly 2 arrives hot on the heels of the original Poly, which was already a great eight-voice MIDI-to-CV module. Polyend have added many features, as well as reducing the module size from 22HP to 14HP. There is a small OLED screen and a push-button encoder, without which many of the new features would be unmanageable. MIDI In and Out are provided on mini-jacks and you can connect USB equipment using either a USB Type A host connector or a USB Type B input. The host input can provide power, if necessary; and if connected to a particularly hungry device, you can switch a jumper on the back of the unit to draw some extra juice from the +5V rail on your Eurorack power supply. Finally, there are 20 separate CV output jacks to connect to your modular.

The Poly 2 can process a maximum of eight voices, but if you require more, you can daisy-chain multiple Poly 2s. The number of active voices can be set in the menus.

There are four modes which dictate the module's behaviour. In First mode, voices are allocated by play order to pairs of CV outputs. The first MIDI note played goes to the first gate and pitch pair, the second to the second, and so on. This mode is probably best used for small polyphonic modular setups, where you might only have limited VCAs, filters and other core modules.

In Next mode, any new MIDI note is simply assigned to the next available pair, cycling around indefinitely. This is closest to the behaviour of most polyphonic synths.

Channel mode passes MIDI channels 1-16 to CV pairs 1-16 (remember you'll need a second Poly 2 to utilise channels 9-16). This is ideal if you have multiple monophonic voices you want to control independently.

The last mode is Notes mode. This will output different MIDI notes to CV output pairs. You can set up which MIDI note is attached to which CV output in the menus. This mode is designed for triggering drums.

As well as the gate and pitch CV pairs, any CV outputs not already assigned to a Voice pair can be configured to convert velocity, MIDI CCs, MIDI clock or transport Start/Stop. Each options has a menu of useful settings allowing you to pick a MIDI channel to respond to, divide clock setting, and so on, so that you can set up each output exactly as you need it. You can also configure CV outputs to match your system. For pitch, choose between 1V/Oct, Hz/V or the Buchla 1.2V/Oct standards. For gates, standard or inverted. These settings are global, however, so will apply to all CV outputs, which will be a problem if you are hoping to mix and match standards. A few other miscellaneous settings round off the Config menus, such as pitch-bend range, MIDI CC smoothing and octave offsets.

Thrown in for good measure is a scale quantiser. You enter the appropriate menu, choose a root note and a scale and the module will quantise all pitch outputs. Once again, this is a global setting.

The ability to save presets in the Poly 2 is a godsend. Being able to plug in a different controller and instantly recall the correct settings is a real timesaver.

I was eager to test out the MPE capabilities, so I hooked up my Roli Seaboard Rise and loaded up the MPE preset included in the Poly 2. Sadly, this didn't deliver instant joy. MPE is a well specified addition to the MIDI spec, but different manufacturers do approach things differently, so some tinkering was required to get them talking. The Seaboard, by default, uses MIDI channel 1 for Global Controller messages and only sends out MIDI note information on channels 2-16. The Poly 2 was expecting MIDI on channels 1-4. So I had to load up the Seaboard software and make a few adjustments (for anyone interested, enable Multi Channel mode and set MIDI Start and End channels to 1 and 4). I quickly had four voices of polyphonic MPE control being converted to Gate and Pitch CV pair 1-4. Polyphonic pitch-bend worked beautifully, allowing me to pitch-bend each note independently using the Seaboard's soft surface. The Poly 2's MPE preset was also setup to output Slide (the Seaboard's vertical movement) on CV outputs 1-4, and velocity on CV outputs 5-8.

The one thing that seemed to be missing from this MPE party was MIDI Channel Pressure, an integral part of the MPE spec. This would have been ideal on outputs 9-12. I could find no mention of it in the manual, however, so I contacted Polyend to ask about it. As it turns out, pressure is supported (as of firmware 2.02), but in rather an odd manner. It shares an output with velocity. Whilst this works, it seems like a rather strange implementation and I must confess to finding it less than satisfactory, as well as being completely undocumented in the manual. Polyend have assured me that they intend to improve upon this in future firmware upgrades.

The ability to save presets in the Poly 2 is a godsend. Being able to plug in a different controller and instantly recall the correct settings is a real timesaver. For example, I connected my Sequentix Cirklon and set up several different Gate, Pitch, Velocity and CC channels in Channels mode, which gave me four separate channels of mono sequencing from the Cirklon's USB output. With the power of presets, I could easily switch between using the Cirklon for one project and the Seaboard Rise for another, without the need to do any setup.

The Polyend Poly 2 is a very useful module, and serves as a fantastic gateway between the modular worlds and just about anything that spits out MIDI. That could be your computer, a smart tablet or phone, stand-alone sequencer or MIDI controller (MPE or otherwise). My only gripe is the very strange implementation of Channel Pressure support, which Polyend have assured me they are working on. In the end, Poly 2 should open up a Babel Fish world of communication between devices which might otherwise never have spoken.