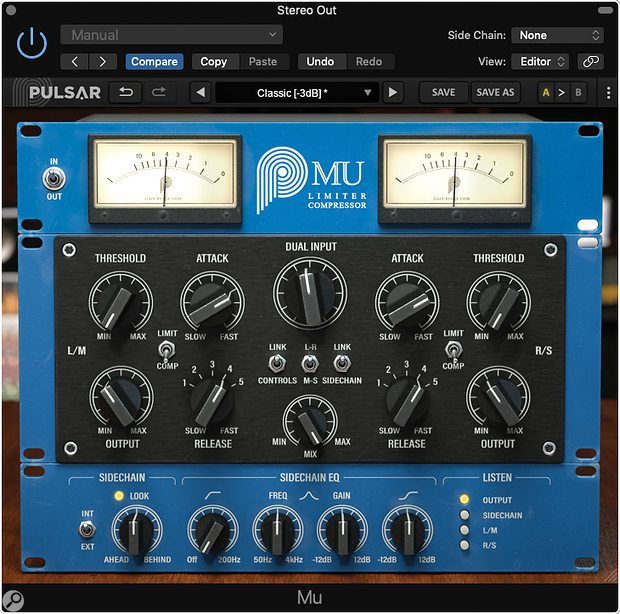 Is this modelled vari-mu compressor as easy on the ear as it is on the eye?

Many ingenious gain-reduction strategies are employed in the design of analogue compressors, involving everything from VCAs and FETs to valves and photo-cells, and all have their own sonic characteristics. Pulsar Audio's Pulsar Mu software compressor is based on a premium variable-bias tube compressor that's valued for its transparency and ability to glue mix elements together without making them sound over-processed. The designers claim that Pulsar Mu sounds identical to the hardware in the context of music production, other than having an improved signal-to-noise ratio; they've modelled all the subtleties of the valve/transformer circuit in great detail.

Mu can operate in either Left‑Right or Mid‑Sides stereo modes, and though it's conceived as a bus or mix compressor, it has applications in tracking, levelling, limiting or simply adding subtle warmth. Pulsar Mu supports the usual native plug-in formats on Mac OS and Windows machines, and can operate at sample rates up to 384kHz. Authorisation uses the iLok system (your choice of hardware dongle or iLok Cloud) and a 30-day free trial is offered.

Mu's side-chain references some of the mods applied by third-party engineers to the original, but also builds on them by offering a more complete side-chain EQ section, with four controls to adjust bass, mid-range and treble. Another feature not possible with the hardware is lookahead, but Pulsar have gone further — as well as lookahead, there's a 'look-behind' option, so you can set this compressor to react either before or after the input signal arrives.

The main panel has separate left and right channel controls for Threshold, Attack, Output Level and Release, the last operated by a five-position switch. In the centre are switches for linking the channel controls and side-chains, and selecting L-R or M-S operation. Another switch, per channel, selects between compression and limiting. A control at the top centre, labeled Dual Input, is used to set the overall input gain, and below it is a wet/dry Mix control for instant parallel compression.

Pulsar have not only implemented [look-ahead], but also a ‘look-behind’ option, so this compressor can be set to react before or after the input signal arrives.

The lowermost blue section offers the selection of internal or external side-chain operation, three-band side-chain EQ with a sweepable mid, a single control for selecting lookahead/look-behind operation, and four buttons to select the monitoring mode, which can be Output, Side-chain, L/M (Left/Mid) or R/S (Right/Stereo). The emulation includes a graphic representation of the analogue metering of the original unit, but if you click on the panel hosting the gain-reduction meters, you'll see an additional and very informative Alternate Visualization mode, which displays waveform level and gain reduction on a moving graphical display.

I found, just as the designers claim, that Pulsar Mu sounds pleasantly transparent in Compression mode, with a very subtle hint of flattery. The option to make the side-chain look-behind is no gimmick, and turned out to be more useful than I thought — it was just the thing for tightening up some drum sounds I happened to be working on.

Like a real vari-mu, it seems kinder than most compressors when it's pushed into heavy gain reduction, serving to control the levels and add glue, without destroying the sense of dynamics of the original material. It works very well as a group-bus or mix-bus polisher, and seems very forgiving of drum mixes in particular, exerting control without killing the transients. It also doubles up as a good vocal compressor.

Parallel compression with the Mix control is handy, and switching to Limit mode allows you to apply a more aggressive squash to the wet signal. It's not a brick‑wall limiter, but you can treat it simply as a high-ratio serial compressor; depending on how much gain reduction is applied and the attack/release settings, it can go from aggressively splatty to politely assertive.

The bottom line is that this is an easy-to-use, easy-on-the-ear compressor that can tackle many different scenarios in style. So why not try the free demo?