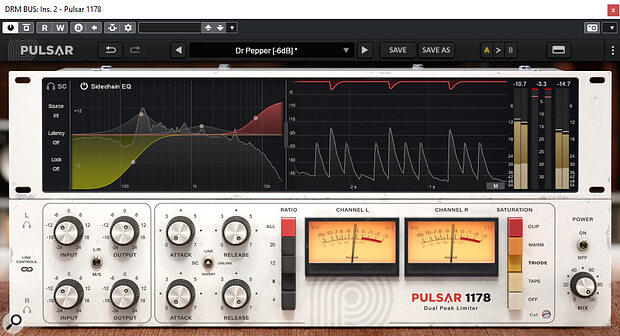 A four‑band side‑chain EQ is just one of many nice touches in this new take on an analogue classic.

Pulsar’s 1178 plug‑in, for AAX, AU and VST2/3 hosts on Mac/Windows, is a modelled FET compressor that boasts oodles of features and controls to make it much more useful than most. Its name is a reference to the Urei 1178, effectively a stereo version of its better‑known sibling, the 1176, and the lower half of the GUI resembles the hardware. There are input and output level controls, a column of buttons for the usual ratios and the famous ‘all buttons in’ mode. These are joined by an analogue‑style gain‑reduction meter too (two on stereo instances), and there’s a wet/dry mix control for parallel compression. As on the hardware, you turn the attack and release clockwise for a faster action.

A versatile saturation stage offers four flavours of distortion: simulated analogue clipping, saturating valves or tape, and Warm, which seems to let most of the low frequencies breathe while still doing what its name suggests. The hotter the signal, the more noticeable the saturation, but a calibration control lets you set the threshold at which saturation starts being applied. The options are all usefully different. For instance, when running a kick into the tape emulation, which is a nice effect, this particular drum became a touch too ‘flabby’, but switching to the Clip or Triode modes tightened things up appreciably.

There are a lot of nice, less‑obvious touches too. In stereo instances, the two channels can be linked, unlinked or, less conventionally, inverted — the left signal triggers compression on the right and vice‑versa, the idea being to inject a sense of interesting movement on something like a stereo electric guitar bus. The channel controls can be linked/unlinked and configured for L‑R or M‑S stereo operation. And if you shift‑click and drag an input level knob, the output knob moves in the opposite direction to compensate for the level boost. These ‘hidden’ functions are explained really clearly by tooltips, which make the 1178 really easy to get to grips with.

In stereo instances, the two channels can be linked, unlinked or, less conventionally, inverted — so that the left signal triggers compression on the right and vice‑versa.

Something that really marks Pulsar’s 1178 out from most modelled FET compressors is the GUI’s upper section, which is proudly digital (you can show/hide each section, by the way). On the left an extensive side‑chain facility features a four‑band EQ, a frequency analyser and side‑chain solo function — it’s so much more precise than the usual HPFs and makes it incredibly easy to prevent this compressor overzealously responding to, say, a prominent snare drum in a mix. You also have the option, at the cost of some latency, of engaging a lookahead function, for greater accuracy.

On the right is an LED‑style meter, a three‑column (three pairs for stereo instances) one displaying the input and output levels and gain reduction being applied (again!). And in the middle is a history graph, of the sort you tend to get on more proudly digital limiters — it’s a really useful feature when you’re learning to engineer, and I wish it were available on more plug‑ins.

Perhaps most importantly, though, the 1178 sounds really good. It might not offer you much tone‑wise that can’t be achieved with other tool combinations, but having all this in one place and so wonderfully controllable is a real advantage. If you’re planning to invest in another FET‑style compressor plug‑in, it might as well be one that’s as brilliantly thought out as this one!

A really nicely thought‑out plug‑in that adds a whole load of digital control and convenience to a model of a classic analogue FET compressor.