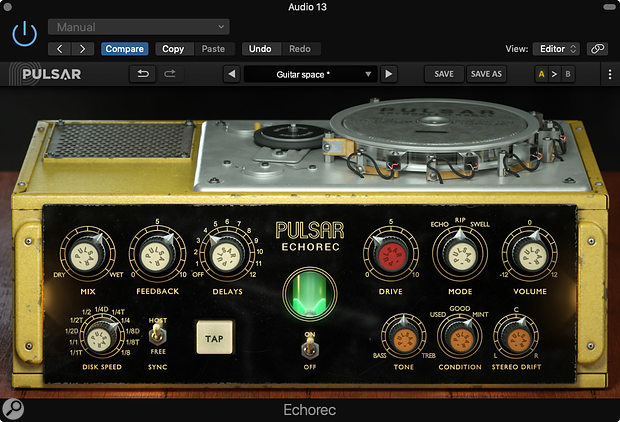 The somewhat idiosyncratic Echorec, which underwent several revisions, was designed by Dr Bonfiglio Bini and marketed under his Italian brand name Binson in the 1960s. It differed from its tape-based echo box contemporaries, in that the recording medium was a magnetic drum with one record, one erase and four replay heads arranged around its rim at musically relevant spacings. The drum had many turns of magnetic wire wound over its rim to form a magnetic strip, and the wire was machined flat to allow adequate head contact. This gave it a slightly different sound from tape, and it can be heard on many classic tracks including records by the Shadows and Pink Floyd.

There were three operational modes termed Echo, RIP and Swell. Echo provides discrete delays without any feedback. In RIP mode, probably the most familiar, the active heads also fed back signal to the input. Swell used signals from all the heads to create regenerative echoes, regardless of which playback head or heads were selected. This produced a very dense sound that sits somewhere between conventional delay and reverb.

Pulsar modelled three different units, which they've designated Mint, Good and Used, to allow the user a choice of characters.

Original Echorecs used six 12AX7/ECC83 valves, which imposed their own saturation character, and by turning up the Feedback control, the delay could be pushed into self-oscillation for dub-style effects. You can still buy refurbished models but they're very costly and need constant maintenance. So having a plug-in alternative is clearly very attractive...

French company Pulsar's Echorec plug-in models the Echorec 2 and supports VST, VST3, AU and AAX formats for Mac and Windows. It retains all the original controls and adds a sync-to-DAW option, which is most welcome, a tap-tempo button, and the ability to change the motor speed. Importantly, none of these additions detract from the original appointments. Pulsar modelled three different units, which they've designated Mint, Good and Used, to allow the user a choice of characters.

There are controls for wet/dry Mix, Feedback (which is bypassed in Echo mode), Disk Speed, 12 delay-head combinations, plus an Off mode, that lets you use the modelled signal path without adding delays. When sync'ed to the host DAW, the time division can be chosen from straight or dotted multiples. Drive allows the virtual input circuitry to be pushed harder, to encourage saturation, and Volume affects the output level. A Tone control allows for warming or brightening of the repeats, and when used in stereo the Stereo Drift control enables the left and right delays to wander in tuning slightly, creating a more spacious effect.

Setting the Delays control to around seven allows the repeats to circulate almost endlessly, and if you go beyond that they build in level and eventually distort in a quite crunchy way. The controls work smoothly, so you can automate them to create dub-style swells, and if you like a bit of mechanical warble, select the Used setting from the Condition dial; this will produce the most vintage tonality. The Pulsar Echorec is a nice plug-in that sounds pleasingly 'organic' to me and also adds some useful functionality compared with the Binson Echorecs on which it's based.