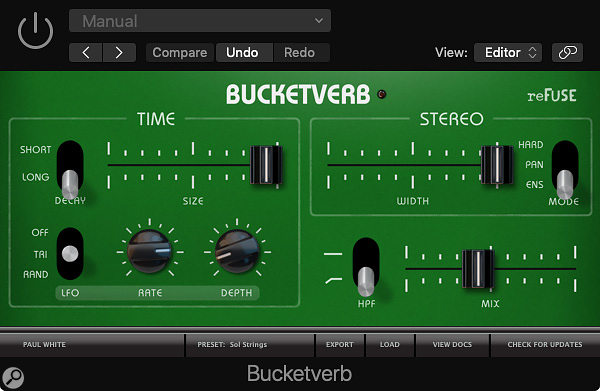 The latest in a line of plug-ins from small Oregon-based developer reFuse Software is Bucketverb, a reverb that imagines a history where charge-coupled analogue delay chips were used to create reverb, and in which the digital reverb revolution never happened. Bucketverb is based on the company's earlier Cheeseverb plug-in, to which it has added a few new extra toppings, and which it now replaces. It's authorised using a licence file that allows it to be used on multiple machines, and it supports VST3, AU and AAX, and both Mac and Windows OS.

A reverb based on Bucket Brigade Delay (BBD) technology could never sound as realistic as a modern digital reverb, due to the degree of signal degradation inherent in the former approach. However, the whole point of Bucketverb is to explore all the imperfections, limitations and colorations that such a device would exhibit. Features that they've added to the basic recipe include panning and a dash of old-school modulation but, as with Cheeseverb, at the heart of this plug-in is a digital model of the Panasonic MN3011 BBD chip. What distinguished this chip from others was the six differently spaced output taps, which made it possible to create more chaotic, reverb-like results, by using feedback paths to recirculate the delays.

Modulation comes from an LFO, with a choice of triangle or random-frequency waveforms, and there's also a choice of three output modes, as well as a variable stereo width control. Hard mode uses hard left/right panning to spread out the alternate taps. Pan mode again spreads the six output taps across the stereo stage, but this time adds movement. Ensemble creates a chorus-like reverb, by modelling a pair of MN3011 chips being modulated in opposite directions — an effect not unlike the Roland Dimension D. Ensemble mode uses preset modulation combined with the main LFO modulation. There are also Long and Short reverb decay settings, in addition to a reverb Size control (which appears to adjust the rate at which the BBD is clocked), a wet/dry Mix control, and a high-pass filter switch that affects the feedback path. There's a set of factory presets to explore, but in reality there are so few controls that you don't need them — you can easily set up what you need in moments.

...anyone looking for something a little different to colour their productions should find it a satisfying, musically creative tool.

As you might expect, the pseudo-reverb does sound very coloured and quite 'rounded' at the top end, making Bucketverb reminiscent of reverb in a large metal tank. It doesn't exhibit the diffusion of a typical digital reverb, and it could never be accused of sounding natural! But it does what it sets out to do, which is to make interesting, musically useful sounds. I found that it often worked really well when teamed with a more traditional digital reverb, just to add a little extra flavour to the pot (or should that be 'bucket'?). The output modes make it useful for adding a semblance of stereo width to a mono source, while the modulation can help to create the kind of ensemble effect of the type used in early string machines — so reverb isn't the only game in this town. In short, then, it's not a reverb that's going to offer you convincing emulations of real-world spaces, but anyone looking for something a little different to colour their productions should find it a satisfying, musically creative tool.