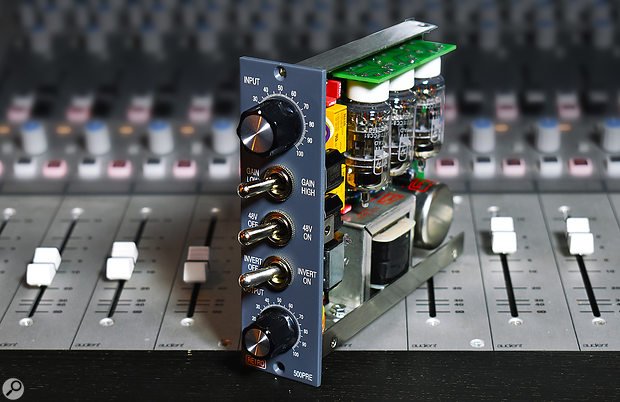 Retro Instruments have supercharged the gain stage of their Sta‑Level compressor to build a 500-series preamp.

Retro may be better known for their larger recreations of classic valve-based gear, but they've long also had a toe dipped in the 500-series waters — I reviewed their impressive Doublewide compressor module back in SOS March 2014 (https://sosm.ag/retro-doublewide). Now, they've delivered a second 500-series product. Named simply the 500Pre, it's billed as a valve microphone preamplifier but, while it can certainly live up to that description, it's actually rather more special than that. It's based on the amplification circuitry of their 19-inch rackmount Sta‑Level compressor — a substantial 3U interpretation of the classic Gates device of the same name, and reviewed in SOS December 2014: https://sosm.ag/retro-sta-level — and crams three 12AT7 valves and chunky Cinemag input and output transformers into a single-width module. Even without the Sta‑Level's dedicated gain-reduction section, that's no mean feat! The idea is that you can choose to use this device either as a relatively clean high-quality valve preamp or as a saturation/dynamics processor, driving the valves harder to take advantage of their natural compression and harmonic distortion characteristics. It could be useful at both the recording and mix stages.

As with other Retro products I've used, the 500Pre's layout is simple and its build quality great. It has that built-like-a-tank aura that customers paying this much should expect, but don't always get. The three large switches, for instance, make those of other units in my 500-series rack look almost comical, and they're wonderfully satisfying to engage, and while the input and output knobs aren't the stepped switches some prefer, they do feel excellent. The three 12AT7 valves are accessible so aren't hard to replace when the need arises.

Operation is simple. There's up to +75dB of amplification available in total, and your choice of Low or High gain modes changes the behaviour of the input stage dramatically. In the Low setting, the 500Pre behaves like a classic two-stage valve amplifier; it allows for up to +45dB of gain, and shouldn't overload at input levels below +10dBu. In the High setting, all three valves are engaged, making the full +75dB available, giving access to much more 'characterful' results as the circuitry is driven into saturation. There are also switches for 48V phantom power and polarity inversion, and an output attenuator knob, so you can maintain sensible levels when 'driving' this thing into distortion.

My first chance to try out the 500Pre was when recording strummed acoustic guitar with an AKG C451, a brightish-sounding small-diaphragm cardioid capacitor mic. It took a few moments to get a feel for what this preamp might offer — it was almost immediately clear that the saturation effect can be seriously unsubtle! Once I'd had a chance to find my feet, with the 500Pre set to low-gain operation and the output attenuator turned all the way up (effectively, off), its behaviour was like a normal valve preamp. And by 'normal' I mean nice, albeit conventional, as it was everything I would look for in such a preamp. The top end felt alive but not harsh, and the bottom end came through beautifully. When recording acoustic guitar I sometimes find myself fighting to get that low-mid region to feel right and that, for example, 1073-style preamps can sound too 'dark'. To my delight, the 500Pre didn't — it seemed perfectly balanced, and when I pushed the gain a bit harder on a strummed section, making the valves work a little harder, the guitar felt nicely 'tucked in'. I got great results on some much louder sources as well, and it worked excellently when paired with a Beyerdynamic M160 ribbon mic on a distorted electric guitar. I also deployed it on a snare top mic, and on a couple of different singers. On every occasion, I felt that the 500Pre was helping the top end to sit nicely, whilst also delivering an overall sound that was full, yet nicely balanced.

Things can get pretty wild — in a good way — when all three valves are engaged.

Switching to the high-gain setting transforms the 500Pre into a different beast — it behaves rather like a guitar amp, in fact, in that you set the input gain to establish your 'tone', and then back off the levels with the output attenuator. Things can get pretty wild — in a good way — when all three valves are engaged, and that's great, since it means this preamp covers a lot of tonal ground. But it also means care is required if applying this 'effect' while tracking, especially with sources that really let you know when they're overly saturated or distorted!

I felt comfortable using it on a mono room mic, and could easily dial in a wonderfully full-on 'crushed' sound that was just the thing for one particular session. It also worked great when used on a bass-guitar cab, for a part I knew wouldn't be disturbed by a little extra growl in the louder sections. The high-gain setting is rarely going to be the best choice for a vocal or clean guitar part, unless for a very deliberate effect, but that's the point — you can switch to the other setting for that, and experiment at your leisure with this more 'flavoursome' mode when mixing.

Speaking of which, I had a lot of fun using the 500Pre as a hardware insert on a couple of mixes. I have access to some excellent saturation plug-ins, but it's still nice to have an analogue option for this sort of thing. Being able to dial in just the right amount of valve saturation on a simple piano part or vocal was great, and I found it well worth the little extra effort involved in going 'out of the box'.

There's lots of debate about the importance of preamp choices in your recording chain, and the differences can certainly be overstated. But the Retro 500Pre is more than just a preamp. It offered me something very different from my existing options (as well as the plug-ins, my studio has an analogue console, and an outboard rack hosting various preamps from the usual suspects, such as Neve and API).

It's hard to articulate just what you feel a preamp is contributing to a recording, but my sense with this module is that it feels like it captures the full range of a source, in a nicely balanced, but also slightly flattering, way. You shouldn't really ask for more than that from a preamp — but, in this case, if you ask, you'll find more! When you drive it harder, it moves from amplifier into effect territory, and this dual-persona really helps the 500Pre to justify its asking price. It was also pleasingly frustration-free; I could only think of minor niggles. It might be nice, for instance, to have an on/off switch, to keep the heat and power consumption down when not in use, and a front-panel DI input would be handy. But most people considering purchasing a 500Pre will, I am sure, own a DI box, and the compact 500-series format inevitably involves some compromise. On the whole, if I had to choose, I'd rather have the full-sized dials and switches instead of a crowded, fiddly layout.

In summary, then, while Retro Instruments' 500Pre may be a small and simple piece of kit in essence and operation, it's a classy one that offers bags of tonal flexibility. Now I just need to decide how I'm going to pay for a pair of them!

When I asked them about replacement valves, Retro were keen to point out that they use 'soft start' circuitry to ensure the tubes enjoy a long life, and take less than a minute to warm up and perform optimally. Some of you may also wonder how much heat so many valves kick out in a small space. I should stress that I didn't encounter any problems in this regard throughout the review tests, but knowing that readers would want to know more, I asked designer Phil Moore about it anyway. Phil says Retro have filled a 10‑slot rack with 500Pres and that they've used it extensively, without issue, and that there should be no problems if you follow the usual, sensible precautions of leaving a little space above valve gear to allow any heat to dissipate.

We also discussed power requirements, since I've experienced some issues with tube-based 500-series modules in some chassis in the past. The VPR Alliance standard for the 500-series sets a limit of 130mA per module, but while the 500Pre exceeds this slightly (160mA), in practice it's less of an issue. For example, running the 500Pre alongside less thirsty modules will probably bring the average current draw per module within spec, and in any case many 500-series chassis now have generously over-specified power supplies. I experienced no problems at all using the unit in my fully loaded 10‑slot IGS Audio Panzer 500-series chassis, which is one such unit, but I'd suggest that if you have a cheaper or older rack, you should check its specifications and the current draw of your other modules before purchasing a valve module such as this.