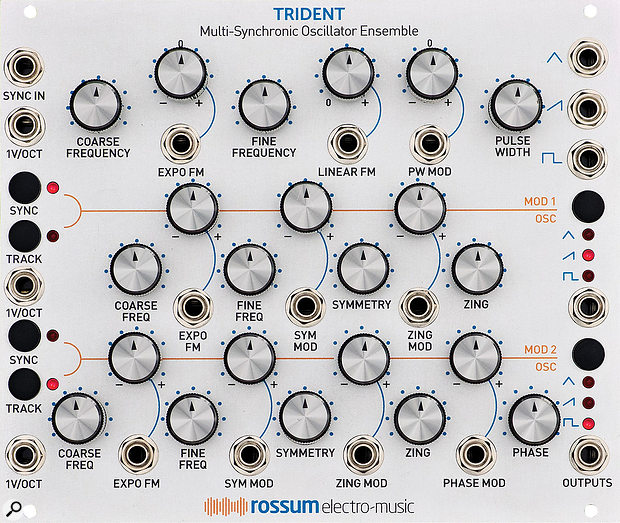 Much like the mythical spear wielded by the God of the Sea, Rossum Electro-Music's Trident is a three-pronged weapon designed for significant damage. Oh, and it has Zing!

Ever since the Minimoog, three has been the magic number. The Trident offers three analogue oscillators, which can be used separately if you wish, but what's distinctive about it is the internal cross-modulation that can be set up between them.

The Trident's main trick is in the combination of classic oscillator sync and its very own Zing parameter. Zing is described in the manual as being mathematically similar to ring modulation. Each of the two modulator oscillators has a Zing control which affects the outputs of the master oscillator, together with a CV input and dedicated attenuvertor. Listening to the output of the master oscillator and increasing the Zing control of either modulation oscillator does indeed produce sounds similar to ring modulation from the carrier. Clangorous, buzzy, inharmonic tones tumble out. Once oscillator sync is enabled on the modulator oscillators, however, the timbres produced are very different. Instead of the metallic overtones one might associate with ring modulation, you are rewarded with very tight, complex harmonic overtones which can sound like anything from phase modulation to wavetable synthesis.

Let's take a look at what each oscillator can do in detail. The master oscillator has coarse and fine tune controls, with the obligatory 1V/Oct input. Additionally, there are exponential and linear FM controls with corresponding CV inputs and attenuvertors. Lastly there is a Pulse Width control, plus CV input. The two modulator oscillators also have coarse and fine tune, along with exponential FM. Additionally, they have something called Symmetry, which morphs the current waveform. It doubles up as a PWM control when the pulse wave is selected, but also morphs the triangle to a sawtooth, or varies the duty cycle of the sawtooth waveform. The second modulation oscillator also has variable phase and phase modulation, which can be used for additional timbre modulation of the Zing parameter when the oscillator is sync'ed with the master oscillator.

OK, if you're still with me, good effort. The Trident isn't an easy oscillator to describe. Luckily, it's easy to use, although I would recommend a slow read through the very well written manual in order to get the best from it. The Trident is remarkable in that it is an analogue oscillator which can produce sounds I've only ever heard from digital oscillators. Using the combination of Zing and Sync, it sounds very much like wavetable synthesis in the way the waveforms can morph and evolve, except it's not bound by the restrictions of a typical wavetable which can only produce a limited number of waveforms. Because it is 100 percent analogue, its capacity for waveform manipulation becomes almost endless.

The Rossum Electro-Music Trident is a premium oscillator module. The build quality is fantastic, and it is perhaps the most flexible analogue oscillator I have encountered.

Of course, it's not just about Zing and oscillator sync. You are getting three extremely stable analogue oscillators which track over a wide range. They are capable of FM, symmetry and PWM as well as having individual 1V/Oct inputs, and the options for additional cross-modulation by patching oscillator outputs to modulation inputs only further expands the possibilities.

There are a couple of niggles I must mention. Firstly, I found it difficult to get used to the layout of the controls. The knobs are scattered in such a way that common controls don't line up. For example, if I reach for a particular parameter, say Fine Tune, and then I want to adjust the same control on another oscillator, it won't be horizontally lined up. This bugs me, and it means you're constantly having to check the labelling to make sure you're adjusting the right control. And on a related note, I find that although the knobs that Rossum use are pretty and pleasingly tactile, it's hard to detect their current position. The small black pointer which is painted on top can be difficult to see, mostly because the metallic chrome cap reflects so much light that the pointer is obscured.

Overall, the Rossum Electro-Music Trident is a premium oscillator module. The build quality is fantastic, and it is perhaps the most flexible analogue oscillator I have encountered. The breadth of timbres it can achieve is vast, but it can still be employed as a juicy-sounding, triple, standard analogue oscillator if desired. Knowing how to achieve the more complex timbres, and indeed pre-empting how certain combinations of features will sound, will take time, so it's an oscillator one must get acquainted with. A Trident at the heart of your system would be an excellent choice, and would grow with you as you become more proficient and embrace the Zing.