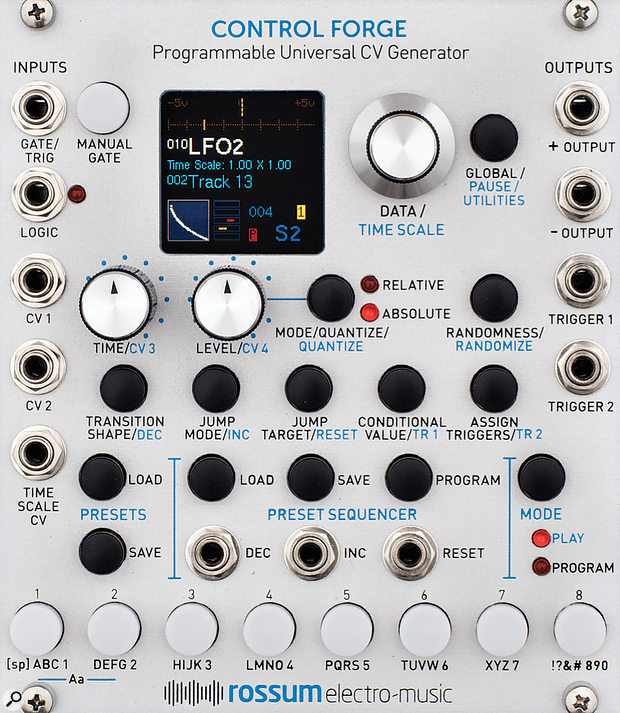 Dave Rossum, the mind behind Rossum Electro-Music, has an intimidating list of credits in a career designing instruments and technology. Seminal creations such as the mighty E-mu modular, the Emulator series, the SP12 and 1200 sampling drum machines and the (spookily ahead-of-its-time) Morpheus synth established Dave as an industry giant long ago — and recently he’s turned his attention towards Eurorack.

The Control Forge is described as a Programmable Universal CV Generator, but even that grand title doesn’t really do it justice. Inspired by the Function Generators of the E-mu Morpheus, the Control Forge can serve as a multi-stage envelope, a complex LFO or a sequencer. It is so deep it comes with 500 memory locations to store your work and the option to export to other CFs or the soon-to-be-released Satellite module. And in performance you can vary the randomisation values, select sections to loop using the buttons, modify the timing globally using the Time Scale CV input and much more.

The Morpheus was an innovative and mind-bending synthesizer concealed behind a tiny screen and housed in a single 19" rack unit. Consequently, getting the best out of all corners of it required dogged persistence and mental agility. In comparison, programming the Control Forge is a breath of fresh air, its high-resolution OLED screen and controls taking away the pain and uncertainty of serving up precision voltage sources. Not only does the screen supply images of the many available segment shapes, it gives a real-time view of the voltage output, which is especially handy for checking the input at jacks CV1 and CV2.

Getting into the nitty-gritty is made easier by the inclusion of a number of example presets, plus thorough documentation steering you through the process of designing something original. To start off, you’re advised to pick a factory example, make a copy and begin going through its many parameters. Fortunately you can progress in stages, leaving the more cerebral challenges until you’ve gained confidence. My own starting point was to consider the CF’s abilities as an eight-segment envelope, in which for each stage you can specify a duration and target voltage — optionally quantised to 1/12 a volt for chromatic use. The target voltage can be an absolute value or be relative to the end voltage of the previous segment and the time values are programmable from between .0000 and 9999 seconds. If you take a moment to absorb that information, it means the Control Forge stretches from audio rates right through to transitions lasting almost three hours per segment. Creating a wavetable oscillator is as simple as setting the timing of each stage to a few milliseconds!

One particularly important parameter is Transition Shape; it determines the way voltage shifts from one segment to the next. There are 67 possible shapes, and while it’s not practical to describe these in the detail they deserve, I can’t skip by without mentioning at least a handful of favourites. Naturally there are linear and a range of exponential curves, but later, when you start to create note sequences, the DC Delay and Delay DC options become significant. These offer a means of keeping a constant voltage at the target level or at the level of the previous segment, which translates to steady note output if the CV is directed to the pitch input of an oscillator. A dozen of the curves offer different flavours of chaos, so your transitions can vary (often wildly) on each pass. Random transition types crank this up even further; and a sprinkling of randomness at different parts of an envelope or LFO can be wonderfully ‘humanising’.

The transitions known as ‘CV1-4 pass-thru’ offer something rather special; they incorporate the four CV sources recognised by the Control Forge. Two of these are voltage inputs and two are generated by the panel knobs. Set one (or more) of the segments to be a CV pass-thru and the CF will neatly substitute the chosen CV at that point.

Ordinarily, each segment progresses to the next in sequence but, as you delve a little deeper, you realise this needn’t be the case. It’s relatively straightforward to set conditions such as testing for an incoming gate or logic signal before progress is allowed. Later, you realise you can jump to a different stage or an entirely different preset based on such conditions, which offers fascinating opportunities for interaction with modules in your system. Turning an envelope into an LFO is as easy as setting it to ‘Freerun’ and you can synchronise its progression and limit the segments played according to external CV values or the CF’s knobs.

Amongst all the slick and powerful features, there was one aspect of the Control Forge that felt a little awkward: the implementation of different note timings. A series of examples are quoted in the manual which may then be globally multiplied to maintain their relative timings. While it works in practice, I couldn’t help wishing for an external clock sync mode and segment durations programmed by selecting standard notation icons. Apparently I’m not the only one to request this, so fingers crossed it can be improved in a future update.

The module has a single CV output (-5 to +5 V) and an inverse output, plus two trigger outputs (of programmable duration) that can be fired off according to a variety of conditions. The triggers can then be used to synchronise other actions in your system or increment presets within the CF itself.

For creation of voltage sequences longer than eight segments, there are a number of options, including ‘Jump Always At The End’, plus a Jump Target, a process that lets you string as many presets together as you like. You can use incoming triggers to increment or decrement the sequences or, alternatively, song-like structures can be created with the Preset Sequencer, again with conditional functions to make it truly interactive.

The Control Forge is a unique and powerful CV generator that becomes more desirable the deeper you dig in. It’s aided by a great user interface, solid patch examples and a manual that’s also a worthwhile download for the curious. Admittedly it isn’t cheap, but the good stuff so rarely is.