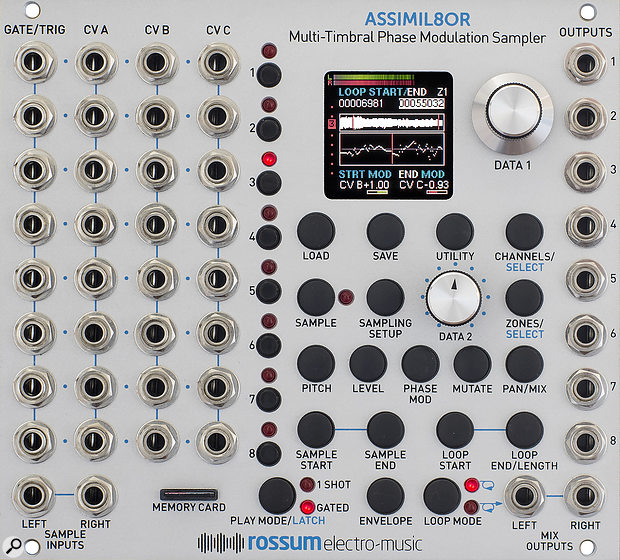 Unless you’re very young, or have been living under a technological rock for the last 40 years, you’ll know Dave Rossum from his previous company, E‑mu Systems. E‑mu were pioneers of early digital samplers and went on to be key players in the sampling revolution, with products like the Emulator series, SP‑1200, Proteus, Morpheus and the ubiquitous Ultra line of samplers. However, before the samplers, they spent most of the late-1970s hand–building the E‑mu Modular system, a competitor to the ARP and Moog modulars that were popular amongst well-funded rock stars and universities of the day. So it is fitting that Rossum’s new venture brings both modular and sampling together.

The Assimil8or is an eight–channel sampler. Each channel has its own output and also appears at a stereo mix output. Channels are mono, but they can be linked as adjacent stereo pairs and up to eight samples can be assigned to Zones in each channel. A whopping 24 CV inputs allow for voltage control over Zones as well as many other parameters, with each input being freely assignable to multiple destinations across all channels.

Samples are loaded in via the micro SD slot on the front panel. Alternatively, you can sample direct in stereo or mono. Sample rates up to 192kHz are supported, and because the signal path is DC coupled, CV sampling and playback is also possible. With 422MB of RAM, there should be more than enough sample memory for all but the most demanding of samplists.

If, like me, you come from the era of hardware samplers (long–time owner of an E‑mu E‑Synth sampler here!), it’s probably worth dispelling a few preconceptions. The Assimil8or will not play polyphonically, neither does it have any filters and it certainly doesn’t have MIDI. However, it does have a number of neat tricks up its sleeve.

Basic operation revolves around a small but crisp OLED screen, two data knobs and a bunch of buttons. Select a channel using the dedicated channel select buttons, then a mode like Pitch, Level or Mutate. Data encoder 1 selects different fields on the screen, and Data encoder 2 adjusts the value of the selected field. Almost all functions work in this way and it’s a very well designed system. Everything is generally only a button click and a couple of knob tweaks away.

Once you’ve loaded up some samples, setting up a channel is easy. The main Channels screen allows you to assign samples. It’s also where you link channels for stereo or stacked playback, and a mode called Cycle allows for multiple channels to be triggered in a round-robin fashion from a single gate input.

All the basic functions you’d expect, like pitch, level, panning, reverse, sample start and end times, plus loop start and end are easily accessed. It’s worth noting that the pitch range for any sample is a staggering eight octaves down and between four and seven octaves up, depending on the sample rate. Any audio sample pitched down far enough effectively becomes an LFO. Linear and exponential FM are also possible via the many CV inputs. The quality of the pitch shifting is amongst the best I’ve heard.

Each sample can be looped. There’s nothing too fancy — forward looping only and only a single loop per sample. You can specify whether the loop continues in the release phase or not. Probably the most important part of looping, however, is the direct CV control over loop start and length. Under gratuitous CV manipulation, glitch nirvana can be yours.

Sampling itself is painless and quick. The Sampling Setup screen shows the various options. Sampling can be triggered manually, by threshold, or by CV. Once you’ve adjusted the preferences to your liking, sampling can be armed or triggered from any screen, and sampling will continue either until the memory is full or a predetermined amount of time is recorded. Samples can automatically populate specific channels if you so choose. Circular sampling allows for a fixed sample time to be constantly filled by looping around to the beginning once the end is reached, overwriting what was previously sampled. Overall, sampling feels well thought out, although an option to resample internal signals would have been useful.

Despite the lack of any filters, there are some interesting sound design tools available. The Mutate screen allows access to variable bit depth (from 32-bit down to 1-bit) and variable aliasing (yes, that’s a desirable thing again), as well as toggles for reverse and something called Smooth. The Smooth function helps to deal with unwanted clicks caused by looping, real-time zone switching and sample choking. Bit depth and aliasing can be automated via CV, but Reverse cannot. I think Rossum are missing a trick there, although reversing can be achieved by Scrubbing or Shuttling.

With all the talk about the death of hardware samplers over the last two decades, it’s wonderful to see such innovation, especially from a master like Dave Rossum.

Scrub and Shuttle, apart from sounding like Saturday morning kids TV presenters, are ways to travel through samples in real time using CV control. Shuttling allows for the speed and direction of playback to be directly controlled, and Scrubbing is the process of controlling the exact playback position. Rather than having dedicated functions, these are invoked by setting certain conditions. For example, Shuttling is achieved by setting a very small loop, and then adjusting the loop start point via CV. The manual gives excellent instructions and the results can include pseudo time-stretching, reversing, tape-stops, scratching and granular mayhem.

Rossum are proud of the fact that the Assimil8or is the first sampler to allow phase modulation between samples. More commonly, and erroneously, known as frequency modulation by Yamaha, phase modulation allows one sample to phase modulate another. Instead of altering the fundamental frequency of a sample, as proper FM would do, phase modulation alters the timbre, allowing for much more musical results. In practice, phase modulating samples requires some experimentation. It’s not quite as predictable as when dealing with sine waves on a DX synth, but it opens up a world of potential. As well as using one channel to modulate another, you can also use CV inputs or the left or right sample inputs. This means you can use an external audio signal as the modulator. You effectively have an 8-operator phase modulation oscillator which is able to load samples. Quite mind blowing when you think about it.

The Assimil8or is not without a few niggles. Setting precise start and end points in long samples can be difficult because there is no zoom function on the sample edit page. It cannot auto-slice samples, although you can have the same sample loaded into multiple zones or channels, all with different start points, so with a bit of manual work, it can be pressed into loop dicing duties. But my main problem is in the browser. There is no way to audition samples before you load them, so loading samples can be something of a guessing game. Luckily, it excels in other areas. The sound quality is remarkable. The pitch shifting is second to none. And the response time is superb. Thanks to latency figures as low as 100 microseconds, the timing feels much tighter than a MIDI sampler. The phase modulation is clearly a headline feature too, and I think could keep an adventurous synthesist busy for quite some time.

I found the Assimil8or could be many things. As drum or percussion sampler, its flexible modulation system means that you can have drums interacting with each other on many levels. For example, route the kick drum output to a CV input and modulate the hi-hat pitch with it. Then phase modulate the same hi-hats with the snare. The result is a hi-hat line that is constantly modulating, but most importantly, it moves with all the other elements around it. Alternatively, it can be a sound–design powerhouse, achieving FM/PM, granular, multi-layered drones and soundscapes with ease. Channels can interact in so many ways that it achieves things traditional samplers can’t even dream of. The price tag will cause sucking of teeth, but this is a premium module. It is beautifully built and offers something unique. The sound quality is superlative and it throws in ground-breaking features to boot. With all the talk about the death of hardware samplers over the last two decades, it’s wonderful to see such innovation, especially from a master like Dave Rossum.

Top 10 Boring Things That Are Really Important In The Studio
5 days 1 hour ago.