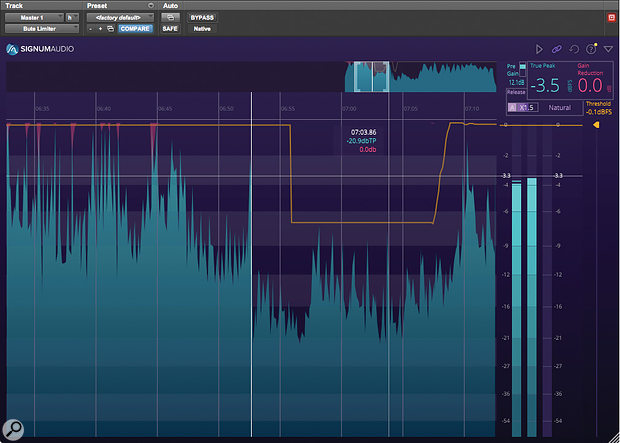 Now that the loudness wars are supposed to be over, the role of the brickwall limiter is changing. No longer is the primary aim to achieve maximum RMS level with minimum collateral damage; now, we expect our limiters to help in the process of optimising a mix for the innumerable different delivery formats out there. This can mean helping to achieve a target loudness value in LUFS, and also ensuring not only that the mix doesn't hit 0dBFS, but that the reconstructed signal won't contain any intersample peaks that could cause distortion further down the chain. It can also mean operating in surround sound as well as mono and stereo.

Signum Audio's Bute Limiter is a thoroughly modern plug-in designed to operate in exactly this context — though if you do want to indulge in a bit of retro endstop-slamming, it will certainly oblige. It's available in stereo and surround versions, and in all the usual native formats, with authorisation using a serial code.

A key design goal of Bute Limiter is not only to prevent unwanted overs but to ensure that the user knows about them.

A key design goal of Bute Limiter is not only to prevent unwanted overs but to ensure that the user knows about them. To this end it features not one but two scrolling displays. The smaller of the two, at the top, provides an overview of your entire song or project, with the main window providing a close-up view of your chosen area within that. By default, this scrolls to follow the playback cursor, but a square grey frame in the top view allows it to be positioned freely elsewhere if there's suspicious level-related activity you want to check up on. A crosshair follows the mouse pointer around, giving an instantaneous readout of true peak level wherever it's pointed, and there are also conventional true-peak, gain-reduction and dBFS meters. Any changes you make to the limiter Threshold setting are also plotted on the graphs as a yellow line.

The behaviour of the limiter is also configurable. As with other designs, such as FabFilter's Pro-L, there's a choice of limiting 'styles', and release time can be specified in milliseconds or switched to a variable auto setting.

The way that I'd normally use an output limiter is to keep the threshold or ceiling slider at the highest safe value — say, -0.1dBFS — and then increase the input gain until the desired average level is achieved. Most limiters I've used also then offer an output attenuator that can be kicked in temporarily to enable the processing to be auditioned with no apparent level change. Bute Limiter works rather differently: there's no post-threshold gain control for A/B comparisons, but if you hold down Shift while moving the Threshold slider, the Pre (input) Gain control will mirror it. I'm not sure I understand the rationale behind this arrangement, or why you'd make the Threshold slider huge and the Pre Gain control minuscule — unless I've been doing it wrong all these years, the latter gets adjusted far more often than the former!

Either way, there is no easy way to have Bute Limiter compensate for any level change you're introducing so that the processing can be scrutinised for limiting side-effects, which is a pity. Fortunately, the limiter itself is excellent and the visual feedback on offer is clear and comprehensive. I don't know of any other product that can keep a log of limiting activity throughout very long sessions, which may help endear Bute Limiter to broadcast users. There is no loudness-based feedback, so if you do want to use it to hit target LUFS values you'll have to pair it with the other plug-ins in Signum's Bute Loudness Suite, but given the startlingly low price of the stereo version, I think this represents very good value for money.