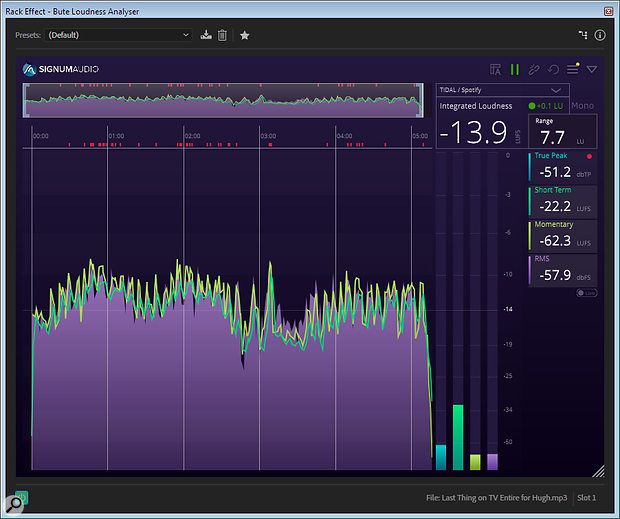 Bute Analyser in action. The red flags indicate points where the signal exceeds the true-peak threshold.

While it’s self-evident that the most important tool for mixing is the human ear, it’s also true that the ear can be easily fooled. As a consequence it continues to be essential to support those critical listening skills with a reliable reference metering system: specifically, one that can analyse the ‘loudness’ of the material against the appropriate parameters for the various media streaming platforms that dominate the consumer music experience today.

One of the latest additions to the multitude of loudness meter plug-ins now available comes from Signum Audio, Scottish audio software developers with 25 years of experience creating elegant user interfaces. The company currently offer their Bute Loudness Analyser both on its own and in the extended Bute Loudness Suite, which combines the analyser with a true-peak brick-wall limiter and a normalising processor, the core tools necessary for ensuring strict compliance with any chosen loudness standard. Both package options are also available in either stereo or surround versions, the former supporting mono and stereo applications, while the latter can accommodate 18 different channel-order formats from mono up to 7.1.

Bute is supported on Windows 7+ and Mac 10.9+, and is available in VST/VST3, AAX and AU plug-in formats. It is authorised using a licence key, and a fully functional two-week trial version is available. The Bute analyser version I tested was v1.3.2 (five updates from the initial release), while the Bute Suite version was v1.0.0.

The current international standard for loudness metering, defined under the catchy title of ITU-R BS.1770-4, is inherently quite a complex beast, generating lots of different measurement values for an analysed track. If this is unfamiliar territory I’d recommend reading my in-depth article about it at www.soundonsound.com/techniques/end-loudness-war.

Complicated though loudness metering may be, it’s well worth climbing the learning curve quickly, because loudness normalisation is now the default condition for pretty much all streaming services, as well as an increasing number of broadcasting platforms. Importantly for those schooled in the ‘traditional’ ways of music production, it completely circumvents all the problems associated with the ubiquitous peak-normalisation approach, which led to the ‘loudness wars’ that have plagued commercial music production since the mid-1980s.

Thankfully, in a loudness-normalised regime, attempts to make a track seem louder than anyone else’s through heavy compression and limiting have become entirely counterproductive, since such processed tracks come out sounding quiet and pathetically flat. Instead, loudness normalisation encourages and rewards the retention of musical dynamics, which is a very welcome change! However, the move from peak to loudness normalisation is still very much a work in progress and, consequently, it is important to hit the target loudness ‘sweet spot’ adopted by each of the different media platforms, as there isn’t, currently, a universally agreed target loudness (although the different platforms are slowly coalescing towards a common standard). 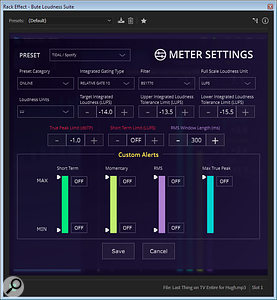 Bute Suite and Analyser ship with a comprehensive selection of presets, but it’s also possible to manually configure almost any metering regime you wish to adopt. To that end, the Bute analyser includes an extensive range of target presets for current and previous HD-TV broadcasting standards in Europe (EBU R128v3 with standard, live and short-form programme variations), America (ATSC A/85-2013), Australia (OP-59), Japan (ARIB TR-B32), and Italy (AGCOM 219/09/CSP), as well as for the Netflix, Hulu and YouTube video streaming services.

There are also specific settings for Apple’s Sound Check system and Sony’s ASWG (home and portable gaming variations), as well as several dedicated music streaming platforms including Pandora, Tidal (standard and Airplay), Spotify and the US Public Radio (PRSS). It is also possible, of course, to adjust the full gamut of metering parameters (including the loudness algorithm, integration times, tolerance ranges, gating levels, filters and display units) to suit any other specific requirements that might arise, and save these settings as new user presets.

The Bute analyser interface can be displayed in ‘collapsed’ or ‘expanded’ forms. The former just provides numerical displays of the Integrated, Momentary (0.4s integration window) and Short-term (3 second window) loudness, along with the True Peak and Loudness Range (LRA) values, the RMS level (with an adjustable 0.1 to 10 second integration window), and the current preset name. Red flags warn of non-compliance with the selected preset’s conditions, and while the default mode displays the changing ‘live’ value of each parameter, there is an option to show only the highest recorded values, if preferred.

All of these numerical displays are retained in the expanded view, but are supplemented with both bar-graph meters and a large history graph, both colour-coded to make it easier to interpret the information being presented. The True Peak, Momentary, Short-term and RMS values are shown on the four meters, while the history graph uses area shading for the RMS and True Peak levels, overlaid with lines for the Momentary and Short-term values. Any unwanted graphical element(s) can be deselected, while hovering over a numerical display window highlights that element on the history graph. The scale range of the bar-graph metering can be adjusted by dragging it up and down, and it can also be switched between relative and absolute scales. The entire GUI can also be resized simply by dragging the bottom right-hand corner.

Above the main history-graph display is a miniature overview with a highlighted area indicating the time window shown on the larger graph. This can be expanded or reduced and dragged about to examine any specific part of the history graph in more or less detail. Hovering the mouse pointer over any part of the main graph also causes a floating information box to reveal the Momentary, Short-term, True Peak and RMS values, as well as the timecode to be displayed for that specific point in time. Additionally, both the main and overview graphs indicate any parameter violations in red, and warnings in yellow, making it very quick and easy to locate any problems.

This is all very elegant and easy to use, and the only oddity compared with other loudness meters I’ve used is that the history graph doesn’t include the Integrated Loudness value. That’s not a criticism, though; since the Integrated value is only acquired at the end of a programme, how it got there isn’t particularly interesting. More helpful is an indicator alongside the Integrated Loudness numerical display, which changes shape and colour to indicate whether the current value is within the relevant tolerance window (green dot) or, if not, how far it is above/below the target value (red arrow).

The final element of the GUI is a set of buttons near the top of the display that provide the usual DAW-synchronised or manual start, stop and reset functions, as well as a button to access the metering parameters, switch between absolute and relative scales, expand or collapse the GUI, and access the plug-in information screen.

I’ve used a lot of different loudness meters in recent years and, while they all present the same core information, some are considerably easier to interpret than others. After a little familiarisation with Bute’s layout I found it very straightforward to use and to extract the required information as I mixed programme material to achieve the required target Integrated Loudness. The numbers-only collapsed GUI is useful when you don’t want to clutter a busy screen, but the expanded version with its history-graph displays and meters is even easier to use, and the markers identifying any parameter violations are really useful, particularly when checking already-mixed tracks. I was able to quickly locate and fix problems, especially true-peak violations, with considerable ease. 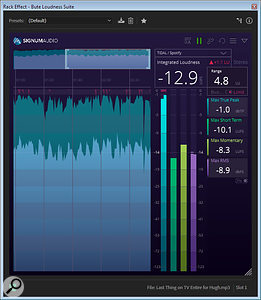 The more costly Bute Suite incorporates a brickwall limiter to catch transients that exceed the true-peak threshold.The Suite version of the plug-in looks almost identical to the analyser except for a couple of small additions. Its integrated brickwall limiter, which guarantees obedience of the maximum True-Peak parameter value, is turned on or off with a toggle switch which appears above the True Peak display in the expanded view, or, oddly, below the LRA range window in the collapsed view. Signum claims this is an ultra-transparent and high-precision brickwall limiter and I have to agree; it works extremely well, controlling the output level perfectly with no artifacts that I could detect.

The other inclusion is an automatic loudness normaliser, but as this currently only works within Pro Tools’ offline AudioSuite processing I was unable to test it on any of my own DAW systems. However, a stand-alone offline version is apparently under development and will be released in a future update to the Bute Loudness Suite. Given the quality of Signum’s Bute analyser and brickwall limiter, I’ve no doubt that it will work entirely as promised.

Overall, the Bute analyser plug-in is a very welcome addition to the field, and quite reasonably priced with a discount for the stereo variant. Interpreting the display is very straightforward, with all the relevant information clearly presented. The factory presets cover all the major broadcast and streaming format requirements, but it is very easy to set up precise new loudness meter parameters if necessary. The Bute Loudness Suite is more expensive than the analyser, of course, but not excessively so, and the extra cost is easily justified by the inclusion of a very effective and genuinely transparent real-time brickwall limiter. At the time of writing, only Pro Tools users are able to benefit from the offline loudness normalisation process, but I’m assured that issue will be addressed for other DAW platforms quite soon.

People tend to have quite strong personal preferences when it comes to metering displays, but I found I got on well with the Bute analyser, and the two-week free trial period is more than sufficient to allow any potential purchasers to become fully acquainted with this accurate and informative new loudness meter plug-in.

A neat and comprehensive loudness meter plug-in with presets for all of the major broadcast and streaming platform requirements. The Suite version includes an excellent real-time brickwall limiter, and an offline normaliser (currently only for Pro Tools).