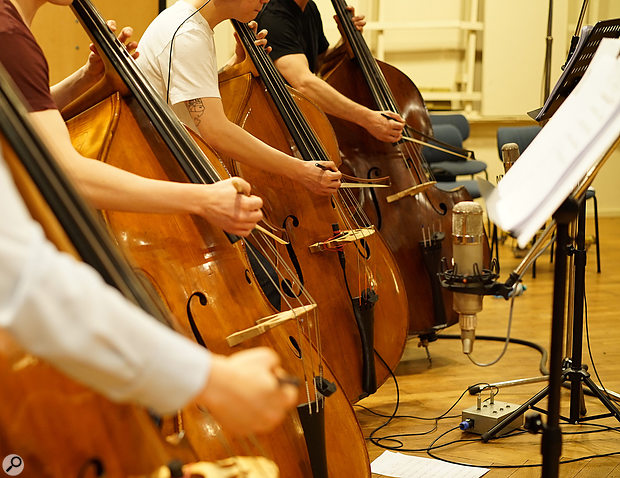 "A composer's job involves the decoration of fragments of time. Without music to decorate it, time is just a bunch of boring production deadlines or dates by which bills must be paid." Frank Zappa, The Real Frank Zappa Book.

Orchestral Tools' Time Macro turns Zappa's assertion on its head: rather than demonstrating how music decorates time, it explores the effects of time on music, ranging from evolving performances and textures to rhythmic patterns reminiscent of clockwork, pendulum-like dynamic swells and altered-speed and backwards articulations.

The sound palette for this temporal journey features the kind of blended orchestral sections and choirs found in Orchestral Tools' Metropolis series, but with some interesting twists (including one combination which absolutely floored me). Recorded at Berlin's Teldex Scoring Stage using the same multi-microphone set up as the company's previous collections, the recordings are presented without effects and are thus suitable for both traditional scoring and sound design work.

For this project, Orchestral Tools recorded eight instrumental ensembles (listed in the 'Instrumentation' box), a female choir and a male choir. You can play each ensemble and choir separately, or in various pre-programmed combinations. Inevitably, Kontakt's Time Machine feature also gets a look-in, enabling you to perform time stretching and time compression on all the individual sections. For quick auditioning purposes, each patch has its own 'preview' audio file consisting of a single sustained note.

Time Macro (henceforth referred to as TMA) contains 85GB of samples which losslessly compress to 42GB on your hard drive. The library works with the free Kontakt Player and Kontakt full version 5.8.1 or higher, which runs on Mac and PC systems. No system requirements are listed, but orchestral sample users know the drill: for optimum performance, you ideally need plenty of RAM and an SSD drive. So, is this a triumphal time trip or a disastrous plunge into a black hole? Armed only with a copy of The Beginner's Guide To Traversable Wormholes and an Argos Mini-Voyager time machine (batteries not included), your intrepid SOS reviewer attempts to find out. 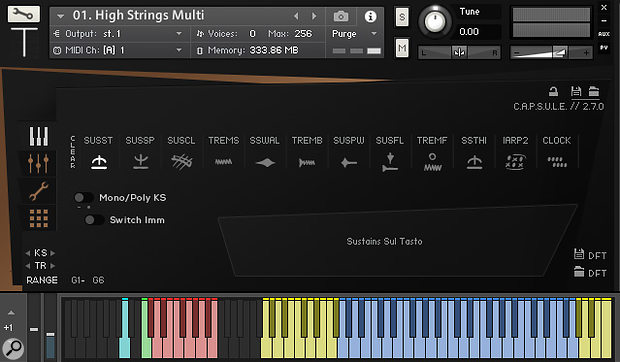 Taking a leaf out of Orchestral Tools Metropolis Ark 2's book, TMA's 20 violins are divided into two groups positioned left and right on the sound stage, creating a wide stereo image. Another nod to MA2 are the 'very slow tremolo' and 'irregular arpeggio' articulations: the first put me in mind of the swirling, three-dimensional effect of a Leslie rotary speaker; a lush, expansive strings sound which is great for chord pads. The arpeggios feature each player performing a rising three-note figure in an ad lib tempo, which generates a collective shimmering effect when played chordally. They come in two flavours: a root/perfect fourth/octave movement, and a variant (which I generally prefer) wherein a perfect fifth replaces the perfect fourth.

A new articulation introduced for this library is the 'pendulum swell', a moderately fast crescendo-diminuendo which emulates a swinging clock pendulum by accelerating the rate of dynamic change as it approaches peak volume, then slowing the diminuendo rate as it grows quieter. Applied to TMA's low strings section, it sounds like a racing car whizzing by — a unique style in sample library annals. Another mobile dynamic texture is the 'ad lib swell': the high strings' version sounds excited and expectant, while the low strings sound like a big, grinding Indian tambura drone. In a similar vein are 'tremolo bursts', a slow–attack, long–sustain texture disturbed by intermittent outbreaks of loud tremolo bowing by individual players. 'Pitch waves' are altogether more scary — they start off in tune, then go psycho as players randomly detune their notes. Good for simulating the sound of a swarm of bees.

More conventional string articulations include sul ponticello and sul tasto; the latter is a delicate, feathery flautando bowing with a subtle built-in crescendo, which sounds beautifully solemn performed by TMA's unison violas and cellos. Harmonics (flageolet) are also included, with tremolo and ad lib swell versions adding movement to their other-worldly, ethereal high-pitched tone. For once, the standard cinematic spiccato style is not included, but what these strings lack in action-film aggression, they make up for in subtlety, mystery and textural mobility.

Though I suspect many users will instinctively reach for the strings to get their music going, TMA's woodwinds have much to offer the creative composer. Gently propulsive and texturally lush, this often-overlooked orchestral section can introduce wonderful colour to an arrangement, and may prove to be the secret ingredient which makes your MIDI scores stand out from the pack.

TMA's high woodwinds consist of four flutes and four clarinets playing in unison, again placed left and right on the sound stage — in the low register, some players switch to alto flutes and basset horns, achieving a satisfactory full tone for the lowest notes with no obvious change in sound. The overall timbre is soft and soothing, with 'airy' performances adding a lush breathy quality. 'Fifth drops' patches feature unison sustained notes over which individual players throw in ad lib short, fleeting fifth intervals, breaking up the sustain texture with small, plaintive musical cries. In the same ball park are 'irregular fifths', in which the woodwinds play up and down fifth intervals at a random tempo for each instrument. Since the fifth is the one interval I would take with me to a desert island, these articulations are pleasing to my ears.

The Kontakt Settings view includes controls for the tempo-sync'ed patterns, including 'auto tempo' (which automatically sets the tempo slider to the best-sounding value for the current tempo) and the useful 'lock to beat' function, which ensures samples always come in on time!

Underpinning the high woodwinds are two low sections: the first comprises four clarinets and four bass clarinets playing in octaves, while the other brings together four oboes and four bassoons, collectively known as the double reeds. These low guys can do you a good, sonorous medieval low drone and, if required, join forces with the high woodwinds to form a complete, classic, rich-toned woodwind choir. As well as the aforementioned fifth-based patches and pendulum swells, they also perform straight short crescendos, which are quicker, sharper and, if played loud, positively blasting.

In an interesting twist, the woodwinds' 'pendulum echo swells' consist of an initial swell swiftly followed by another. In the case of the high section, the flutes' swell is answered by the clarinets, while the double reeds have oboes echoing the bassoons. Overall, these woodwinds offer users a large performance menu ranging from simple, straight deliveries to arty left-field articulations. Not all of the latter are successful — for example, the high woodwinds' 'sustains flutter ad lib' patch features some lamentable tuning — but for any composer looking for a sumptuous, full-textured symphonic sound that goes beyond the industrial norms imposed by modern media music conventions, these woodwinds are a great resource crying out to be exploited.

Adding a regal touch to proceedings, TMA's brass section consists of four trumpets and four trombones. Wherever practical, the players replicate the strings and woodwind articulations, while introducing several of their own: the massed 'tally ho' fifth intervals of 'sustains staccato ad lib' sound like the warm up to a hunt rally, and if you need an unusual-sounding tension builder, the attenuated, nervy 'flutter ad lib' long-note style will do the trick. 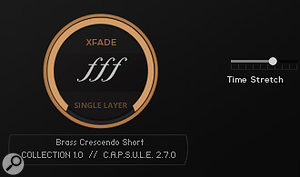 Kontakt's 'Time Machine' feature allows you to stretch or time-compress samples — the latter can be a useful way of tightening up slow note attacks.For those who seek straightforward brass aggression, the 'marcato long' performances sound strong and triumphal, and the rasping 'crescendo short' will rattle your windows — load the Time Machine version of that patch, extend the low range and use the 'Time Stretch' slider, and you can transform the trombone low notes into monumental, Inception-style Tibetan horn blasts. You can also use this slider to shorten the marcato note attacks, or squeeze the short crescendos down to a quick, zipping rasp. For less confrontational settings, the brass' basic sustains (which include a subdued muted option) are good and solid, spanning a tonal range from mellow to majestic.

TMA's choirs of 12 women and 12 men contribute some excellent material to this inventive library. The basic sustained vowels are 'aah', 'ooh' (which the makers call 'uuh'), 'nnh' and 'zzh'. There's also a breathy, quiet and intimate 'air' sustain, which sounds lovely layered over the regular 'aahs'.

I'm pleased to say the singers avoid the mannerisms which irk me in sampled choirs: their long notes are sung in a plain, pure, unaffected style free of excessive vibrato, and their vowels stick to the script. I've lost count of the number of sampled classical choirs who render a simple 'ooh' sound as 'or'. I don't know if I'll find a musical home for the sinister-sounding, serpentine 'zzhs', but the 'oohs' and 'aahs' are highly usable, and I love the warm humming of the women's and men's 'nnhs'. Featuring a wide dynamic range and excellent tuning, these are some of the best choir sustain multi–samples I've heard.

The 12-piece women's choir, a beautifully in-tune group of singers.

The choirs perform a range of ad lib styles which match those of the ensembles, including their own take on the disquieting 'pitch waves'. They also do some 'na na na' massed babbling, a lyric which has the advantage of being equally meaningless in all languages. In general, such articulations work best when you pile up notes, blurring the individual singers' idiosyncrasies and creating a musical Tower of Babel effect. One style which amused me was the 'fifth drops' — these excited yelps sound as if the singers have just received a big surprise, such as a text message informing each of them that they've won €20 million on the state lottery.