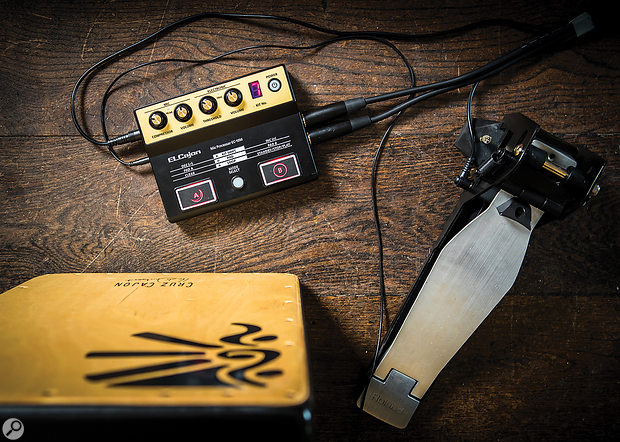 When Roland first announced the EC-10 electronic cajon I was intrigued, as many smaller acts, including the trio I play with, use a cajon in place of a regular drum kit, and the prospect of adding a few new percussion sounds was very attractive. One of the limitations of the EC-10, however, is that only the electronic sounds are fed to the internal amplifier or external DI socket, so if you want to mix in the acoustic sound of the cajon, you have to put a mic in front of it. For me the new ELCajon EC-10M is a more practical option as it allows you to use your own cajon, which may be better suited to your playing style, and indeed I found it also worked well on my cajinto — which is a good cajon-style alternative for those players who don’t want to get back strain.

The EC-10M comprises a small, stomp-format ‘brain’ into which you plug the included clip-on mini capacitor microphone. The mic clips onto the rim of the cajon soundhole, but in my tests also worked fine clipped to the bottom edge of my cajinto. Powered from either the included mains adaptor or four AAA batteries, the EC-10M includes some clever frequency analysis that lets it differentiate between the bassy slap and the more edgy ‘snare’ sound of the cajon so that each can trigger a different sample.

There are 16 preset electronic ‘kits’, each of which comprises the two different slap and ‘snare’ sampled sounds plus two more that can be triggered either via the footswitches on the EC-10M itself or by optional Roland kick trigger pedals (KT-10, KT-9, or KD-7) plugged into its TRS Trigger In jack using a Y splitter cable. Unlike the original EC-10 electronic cajon, the mic picks up the acoustic sound of the instrument, which can then be mixed in with the electronic sound — and the acoustic sound can also be processed via a variable one-knob compressor and a switchable enhancer to add brightness. Roland have also added a simple looper to this model that lets you record and loop an electronic rhythm so that you can play your acoustic cajon over the top. Those 16 kit variations include some sampled acoustic cajon sounds, some with added ambience, and there are also alternatives such as kick, tambourine, pot drum, splash cymbal, TR-808 snare and so on.

Made from robust plastic, the floor unit has four knobs along the top plus two footswitches and a Mode select button, Power button and a single alphanumeric display to indicate the currently selected kit, as a number up to nine and letters beyond that. On the left of the case is the TRS Trigger A/B input, a 3.5mm mic input, a mic gain control and the Enhance switch. On the right-hand edge are output jacks labelled Mic/Mix and Electronic, giving you the choice of a mixed electronic and acoustic output or separate feeds for each. The power input socket is also on that side. 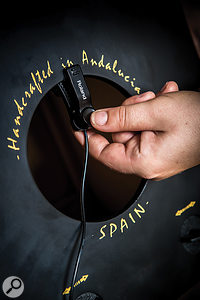 The included mini capacitor mic is designed to clip onto the inside of a cajon’s soundhole.The first two of those four control knobs access the compressor and volume for the acoustic cajon sound coming from the mic, where a peak LED warns of clipping. If necessary the mic gain can be adjusted using the gain knob on the left of the case. Threshold and volume controls are present for the electronic sounds, with a trigger LED to show that threshold is set appropriately. The two footswitches control different things depending on the mode selected — the Mode button either stays dark, flashes red or stays on solid red to indicate Kit Shift, Loop or Pad modes. As you’d expect, Kit Shift mode uses the switches to step up and down through the 16 kits. Pad mode allows the switches to be used to trigger the two additional kit sounds directly, whereas in Loop mode, the left switch acts as a Clear button and the right cycles through Standby, Stop and Play. In Standby mode, the first trigger hit starts the recording process.

My first thought was to check out how effective the EC-10M is at differentiating between the thump and snare sounds of a typical cajon. Once the threshold is set high enough to prevent false triggering, it’s actually surprisingly consistent. The odd careless slap can result in the snare sound being triggered when you intended it to be a bass sound but in most cases it just adds to the rhythmic interest. If you take care where you hit and take the time to find the best threshold setting, the detection is extremely reliable. Being able to mix in the acoustic sound is also a great bonus, though as with any mic you have to be careful not to invite feedback problems, especially if you use a lot of compression.

The range of sounds, though smaller than for the EC-10, is quite practical with a number of acoustic cajon variations, plus acoustic kicks and things like a tambourine on the snare sound, some useful electronic alternatives and just a smattering of ethnic percussion. It may not offer any programmability but at least it is very simple to use and the electronic sounds sit nicely over the acoustic cajon sound. The two additional trigger sounds are preset for each kit and usually relate to sounds that you’d use only occasionally, such as a crash cymbal. I would have liked to have had the option to keep a kick sound assigned to one of the pedal inputs for all kits — but I guess the thinking behind not doing that is that those users too mean to buy an external pedal might beat the unit to death by using the footswitches as kick pedals.

Overall I preferred the experience of using the EC-10M over that of the original EC-10, the only downsides being the reduced number of kits and the risk of dislodging the PSU adaptor during performance, though if you always keep good batteries in the unit they’ll take over if that happens. The mix of acoustic and electronic sounds adds interest to what is essentially a fairly simple instrument, and with a typical street price of not much over £200$200 it could be just what you need to give your performance a lift.

I don’t know of anything comparable but there’s always a Wavedrum or a set of sample-playing drum pads if you don’t actually need the cajon sound.

A very practical alternative to the EC-10 that works with any acoustic cajon.