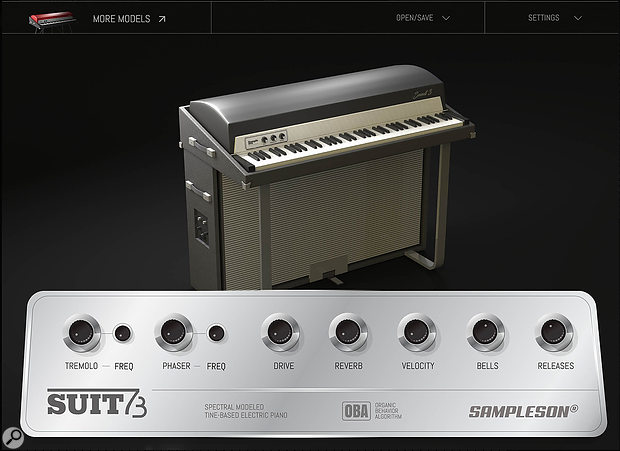 Based on the Rhodes Suitcase electric piano, Suit73 is a virtual recreation of that instrument using Sampleson's own Spectral Modelling technique to analyse the original sound and recreate the same timbral components by stacking sine waves together. The result is a truly compact plug-in, a mere 35MB in size since no samples are involved, and very light on CPU — a valid consideration for mobile recording setups or situations where computer resources are limited.

Suit73 is so simple to use you won't need a manual — indeed, there isn't one. Controls consists of Drive, a saturation distortion; Reverb, a bright roomy type of fixed duration, around 2s in length; Velocity, increased values favour the higher dynamics; Bells, the bright 'milk bottle' impact sound; and Releases, the mechanical sound of dampers muting the tines at note-off. Two effects are included: Tremolo depth and speed (this is a mono tremolo, as opposed to a real Suitcase piano's stereo panning effect) and mono Phaser with speed control and seven depth settings. The laptop/tablet brigade will appreciate the re-scalable GUI, adjustable from 50 percent up to 200 percent.

Tonally, Suit73 leans heavily toward the second harmonic, equivalent on a real Rhodes to adjusting the tines towards the centre of the pickups, giving a tight, slightly 'strangled' tone. This is especially apparent between C2 to F3 and from A4 upwards, where the second harmonic seems overly dominant. Being modelled, the instrument benefits from seamless timbral transitions over its whole dynamic range, although the dynamic response curve ramps up rather quickly, so a very light touch is required to play the softest, more bell-like tones. Tuning is not super-precise, which is a good thing — some subtle beating here and there helps to prevent Suit73 from sounding too 'perfect'. On a real Rhodes, the tone bars can ring out for well over 15 seconds; in contrast, Suit73's decay time is curiously short, around six seconds at middle C, 10 in the bass and just over two at the top end. One other annoyance is that the damper release sounds occur when keys are released whilst using the sustain pedal; they should only be heard when the pedal is lifted. Hopefully this can be fixed in an update.

The result is a truly compact plug-in, a mere 35MB in size since no samples are involved, and very light on CPU — a valid consideration for mobile recording setups or situations where computer resources are limited.

Sampleson recommend using Suit73 with their free Dynomod plug-in, inspired by the Pro‑Piano preamp that was part of the famous Dyno-My-Piano custom modifications done to real Rhodes instruments back in the day. Information on Dyno-My-Piano mods and their inventor Chuck Monte can be found at www.fenderrhodes.com/history/dyno.html. Dynomod provides two tunable EQ bands — one for bass and one for overtones, and incorporates a stereo widening effect; I wonder if there might even be some kind of multiband compression going on too. Whatever the underlying processing, Dynomod breathes extra life into Suit73 — the difference is quite dramatic. I've also tried it with a variety of other virtual Rhodes instruments, and they all respond in similarly dramatic and agreeable fashion.