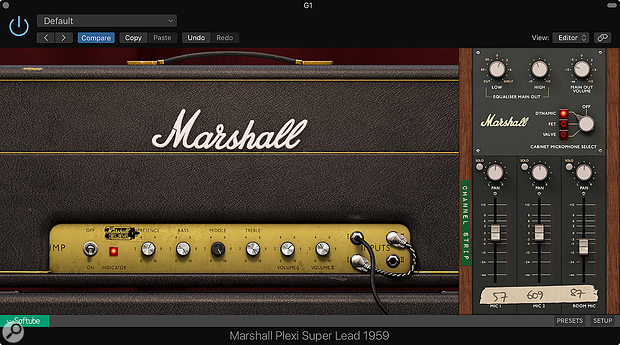 Marshall's model 1959 Super Lead is one of a select group of iconic guitar amps that, arguably, helped to define the sound of an era. Softube's plug-in version, painstakingly modelled using a definitive example from Marshall's own historic collection, was originally developed for the UAD platform but has been made available now in native format, compatible with all major DAW hosts. The modelled signal chain includes a period-correct Marshall 4x12 and miking courtesy of UK engineer Tony Platt — a man renowned for getting the best out of the Marshalls of, among others, AC/DC and Iron Maiden.

The scale-accurate graphic rendering of the amp in the plug-in does mean that the box is rather big and the actual controls rather small, but there is a parameter read-out at the bottom of the window if you feel the need to be precise. A real Super Lead's tone controls are not especially nuanced — it was not uncommon for Marshall amps of this era to be used in such a way that only Volume and Presence were anywhere other than 10. More significant adjustments take place in the Channel Strip pop-out window, where you can set the choice and relative volumes of two close mics and a room mic. There are three mic setups: Dynamic, offering a Shure 57 and a Sennheiser 609 as close mics, with a Neumann U87 for the room; 'FET', using a Josephson E22 and U87 combo, with a Coles 4038 ribbon for the room mic; and Valve, with a pair of U67s up close and a C12 for the room. There's also an Off setting which actually disables the cabinet as well as the miking, so you could widen your options by using the amp alone, teamed with the speaker impulse response of your choice.

A simple two-band EQ acts on the combined output of the miking, and each channel has a Pan control, so you can open out the two close mics, or separate the close mics from the room when operating in stereo. Personally, I preferred a subtle contribution from the room, rather than any setting where it became a significant part of the sound, but there is enough variety in the different mic voicings to find a good balance between focus and warmth.

Clicking on a jack socket chooses which input you'll be using, and clicking again cycles you through the available input-combining options. The extreme brightness of the I (lead) channel made input jumping a popular option on a Super Lead, allowing you to blend in the deeper tones of the number II channel, and this is faithfully reproduced in the plug-in. Just like the real thing, the I channel alone is almost unbearably bright until you get the volume control up above 4, where it begins to mitigate the effect of the 'bright' capacitor strapped across it. The real amp at this level would still clean up nicely with the guitar volume control backed off, even with humbuckers — a trick that the plug-in doesn't seem to manage to quite the same extent. That's not altogether surprising as the physics of the two scenarios are quite different. It is a bit of a challenge for any software amplifier that isn't being fed by a known and preferably dedicated hardware interface to precisely replicate the behaviour of a passive guitar plugged directly into a tube amp. But, if you tweak the amp for a little less gain and pull out a bit of the mids, there are still some very nice, touch-sensitive clean sounds to be had.

Super Leads, in the real world, belong to a different era — one in which the extreme distortion of modern metal amps was unimaginable and indeed probably considered undesirable. Anywhere above 6 on an SL would start to get a bit loose and messy, and anywhere below 4 could be quite thin and harsh. In the plug-in, every bit as much as the real thing, the classic Marshall crunch tones lie somewhere in between, and if you want something denser, you are often better off pushing the input with a pedal than cranking the virtual volume up to 10.

The Marshall Super Lead was a brilliant 'live' amp, designed in the days when the on-stage guitar sound was often intended to fill the venue, with the PA being just for vocals. For recording, I generally found them a little low on warmth and texture in the distorted voice, unless I was playing crunch riffs and rhythm parts. But when you want 'that sound' it certainly can be found in this plug-in, and for that alone it might deserve a place in your tonal toolkit. 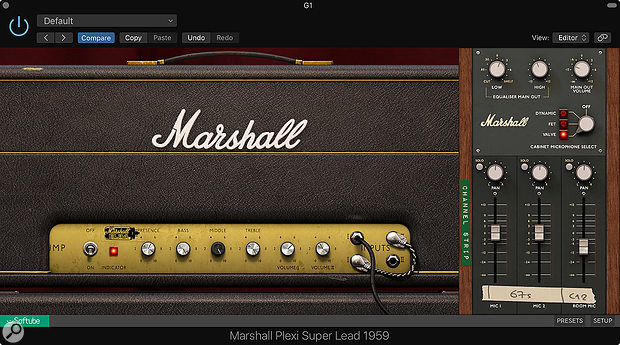 A bit of crunch chording and sustaining single-note solo lines, with the plug-in settings exactly as I used to use my old Super Lead most of the time. Miking uses the default Valve setting with just the Room pegged back a little. The guitar is a Les Paul Custom, with the bridge pickup on 10. No EQ or dynamics processing is used, with just a bit of Logic's tape delay and plate reverb added. Despite the relatively high gain, self-noise is acceptably low, and quite comparable to the real thing, in my experience. 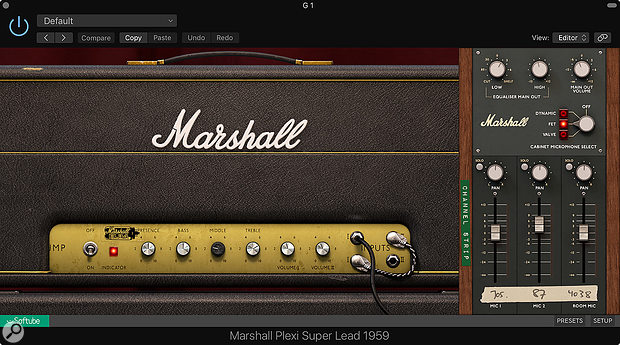 For this cleaner example I've backed off both channel volumes by about 10 percent and reduced the mid control to well under half. I've switched to miking to the FET combo, as it suits this sound a little better. The guitar is a Strat this time, using a neck and middle pickup combo, with the volume control right down at about 3.5. I have the common 1,000pF/150k-parallel treble compensation on this particular guitar, so it's still quite a 'glassy' clean down there. Neck pickup on its own would probably be fine without any compensation, whereas the combined pickup setting can get a bit muddy. Again no EQ or dynamics processing used, but there's the same tape delay and plate reverb as the other example, just a touch more of it.

The Super Lead is a very bright-sounding amplifier: no modern design comes anywhere near to it for crunchy upper mid-range. There are other circuit factors involved as well, but a lot of the Super Lead's extreme treble comes from the use of a particularly large value 'bright cap' (capacitor) strapped across the lead channel's volume control (channels are actually just labelled I and II). At 5000pF it is more than 10 times the value commonly used in other amps, and it has a profound effect on the way the amp works. Bright caps allow high frequencies to bypass the volume pot, with their effect being greatest at low settings and diminishing eventually to nothing if the pot is turned all the way up. A 5000pF bright cap is passing not just high treble but a lot of mid-range too, so much so that it significantly skews the taper of the volume pot. At 3 on the dial a Super Lead is already rather loud, albeit uncomfortably thin and biting, but the bright cap begins to have less effect as you turn up further, until you reach an absolute 'sweet spot' at about 6. Latterly, there seems to have been a bit of forum mania for snipping the bright caps out of Super Leads, or at least just subbing them for a more conventional value. Admittedly, you probably end up with a more usable amplifier for today's requirements and volume restrictions, but it will no longer be a Super Lead, with its very particular brand of magic.

Softube's plug-in seems to include the full 'bright-cap experience', and as a plug-in, of course, you can turn it up straight to the sweet spot without getting arrested — a Super Lead on 6, into a 4x12 was unbelievably loud and best experienced from about 10 feet behind you! The Super Lead's inherent brightness also made it a perfect partner for the darker top-end of a humbucker-equipped guitar, but it had its share of single-coil users too, and was particularly sweet on a Strat neck pickup, with the amp volume well up and the guitar volume backed off to avoid driving the input too hard — a classic Jimi recipe, of course.