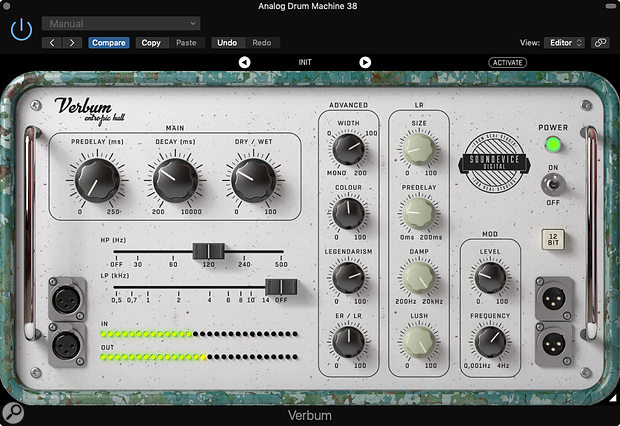 While it doesn't set out to emulate any specific vintage reverberator, the Verbum Entropic Hall plug-in uses a chaotic reflections algorithm to create a reverb with a character that's reminiscent of early reverb machines and subjectively satisfying. VST/AAX/AU Mac and Windows plug-in formats are supported, and authorisation employs a licence file that allows the plug-in to be installed on all your computers. The balance of early and late reflections is freely adjustable, and there are separate pre-delay settings for each. Slider controls set the high and low filters, and the decay time can be set up to 10 seconds — though even at the maximum setting, the decay doesn't seem over-long, which suggests that the 10s corresponds to the -60dB or T60 standard. Even the virtual A‑D converters have been modelled to make it sound 'old', but if that still isn't vintage enough, a 12‑bit button will add further, subtle grit to proceedings.

Once you get past the more obvious and self-explanatory controls at the left of the panel, you'll want to investigate the Advanced section, which offers controls for stereo Width, Colour (saturation), Legendarism (more vintage-style processing) and the Early/Late reflections balance control. Moving further right, a row of lighter-coloured controls is dedicated to the late reflections or reverb tail, for adjusting room Size, Pre-delay, HF Damping and Lush, the last of these applying some subtle modulation in the tail-generation algorithm. To the extreme right are two more controls for adding a more conventional pitch modulation to the reverb tail, with control over Depth and LFO Frequency.

Although it's based on a single algorithm, the Verbum Entropic Hall turns out to be quite versatile. It's capable of small-room ambiences and tight plate-like reverbs at one end of the scale, and plausible large rooms at the other. Those controls designed to augment the vintage nature of the reverb are fairly subtle in effect, so while you get character you never get anything too nasty, and though the plug-in comes with the expected list of presets, the controls are so straightforward that making your own adjustments takes only moments. The key question for many users will be along the lines of, "Does this reverb offer anything the algorithmic reverbs of my DAW don't?" And that's an easy one to answer for yourself, as there's a 15-day fully functional trial version.