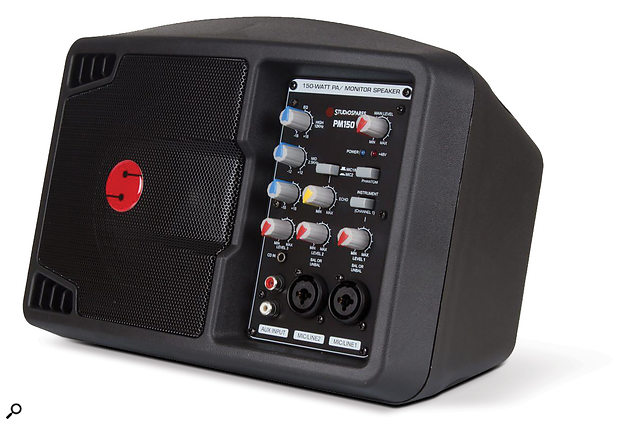 The PM150 active monitor puts your vocal sound right where you need it!

The Studiospares PM150 is a compact personal monitor that can be mounted on a mic stand to face a singer, or can also function as a stand-alone PA speaker for small events where you don't need a lot of low end. A stand adaptor is included, along with a short extension pole that can be screwed into the top of the cabinet to hold a mic, avoiding the need for a separate stand.

Rated at 150 Watts peak power (125W continuous), the speaker weighs in at just 3.3kg, making it very portable, and there's a useful carry handle built into the top of the cabinet. Its moulded cabinet is 290mm wide and houses a single 5-inch speaker, protected by a steel grille. There's no tweeter, which means the frequency response is limited to 100Hz-10kHz at the 3dB down points, but this is perfectly adequate for covering the vocal range, and in situations where it's being used as a monitor, the main PA will provide plenty of low end on stage. It claims a maximum SPL of 114dB at one metre, which is also more than loud enough for personal monitoring applications, and in addition to housing a three-channel mixer it sports an adjustable echo/ambience effect.

The PM150's mixer section is recessed, and all the controls and inputs are on the front of the cabinet, making it easy to access and adjust during performance. There are two mic/line inputs on 'combi' XLRs as well as a third channel that can accept a stereo input via a pair of RCA phonos or a TRS mini jack (this channel is internally summed to mono). There's switchable 48V phantom power for the two mic inputs, and an instrument (high–impedance) switch for the jack input of channel 1. The Echo effect has only a single amount control, but there's a switch that dictates whether it is applied to mic channels 1 and 2, or only to mic input 2. It may not be the most sophisticated of effects but is useful if the singer would like to hear a bit of 'comfort' ambience in the monitor. A three-band EQ provides overall equalisation and offers ±15dB shelving at 12kHz and 100Hz, plus a fixed 2.8kHz mid control with a ±12dB range. All three input channels have their own level controls, plus there's a master level control and LED indicators for mains power and phantom power.

I'm a big fan of these small, bandwidth-limited monitors for small gig applications, as they do what's needed without taking up excessive space or adding woolly bass to the proceedings.

Tested first with music playback, the PM150 sounds predictably mid-heavy, as all the really low stuff is rolled off to conserve the power handling for where it is needed in the vocal range. I set up my own (rather more expensive) Mackie SRM150 alongside for comparison purposes, and though the sound was similar with the EQ set flat, there was a slight tonal difference, with the Mackie being perhaps marginally smoother-sounding on music. However, when used purely for vocal monitoring the differences became much less obvious, with both speakers doing a solid job of letting the vocalist hear themselves in a typical live setting. Furthermore, using the delay effect in moderation gives good support to those singers who feel uncomfortable when they hear themselves 'dry'.

I'm a big fan of these small, bandwidth-limited monitors for small gig applications, as they do what's needed without taking up excessive space or adding woolly bass to the proceedings. OK, you can't easily put your foot on one during a guitar solo, but that's about the only disadvantage. And this one does exactly what it sets out to do, it includes a useful mixer and echo effect, and it is highly affordable.

A compact and convenient way of letting vocalists hear themselves on stage, without breaking the bank.