Looking for a quality active speaker, but don’t want to pay for features you won’t need? You may need look no further...

The Auditorium series of self-powered portable speakers from Studiospares is currently in its second version, this newer model boasting more efficient driver components and also differing cosmetically from the original version. According to the Studiospares sales team it has proved popular with a range of customers looking for an affordable product, which offers a decent output rating but without the bells and whistles of the more expensive competition.

I had the chance to try a pair of Auditorium 2 212A units, which are the self-powered models; a passive version called the 212C is also available. The 212A is built to what is arguably the most popular format for portable PA speakers, namely a two-way design with a 12-inch woofer and a one-inch-exit compression driver.

First off, I was surprised to discover that the wooden-looking cabinet is actually of plywood construction, because at this price I wouldn’t have been too surprised to find it made of plastic. It’s a nice-looking design, slightly taller than most moulded-plastic 12-inch models, and looks good either sat on a pole or standing on top of a couple of subwoofers. The 212A can also be flown, and is equipped with standard M10 flying points. The shiny black textured coating is very thick and appears to be pretty tough — I gave the edges and corners a few taps with my nylon lump hammer and the coating remained intact and unmarked. I very much like the full-face metal grille, which is backed by a thin layer of cloth or foam to provide a bit of extra protection for the components behind, and further enhances the ‘pro’ appearance. 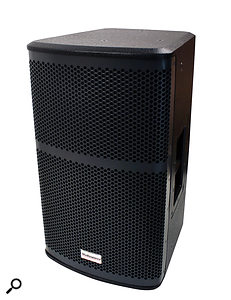 Picking up the 212A is easy enough, and the metal bar-type side handles are a good size and sensibly placed on the box (ie. fairly near the top so that it’s more stable and easier to carry between two if necessary). At 26kg the 212A feels about as heavy as it looks, if you know what I mean — it’s not a featherweight, but it’s perfectly manageable, and most users should be able to pick it up and carry it without difficulty. As far as I can determine, though, the driver magnet material is ferrite, not neodymium as the web description suggests.

The drivers used in this speaker are a cast-frame, 12-inch woofer and a Studiospares K44 compression driver, mounted on a rotatable 90x60 waveguide, and these units are actually stock items available from the Studiospares catalogue. The availability (or not) of spare components, particularly drivers, is something that has certainly influenced my purchasing decisions in the past and it’s surely good to know that, should something unfortunate occur, the exact replacement component is available right off the shelf — you can even click through from the published spec on the web site straight to the parts listing, and have a pleasant surprise when you look at the prices.

The amplifier section sits in the back of the cabinet and is sensibly mounted such that the heatsink fins do not protrude beyond the rear surface, and are consequently unlikely to cause injury or damage to other equipment (for example when sliding the speakers into the back of an estate car) and are themselves protected against being bent. The control panel is very simple, consisting of a single ‘combi’ type input connector which will accept XLR or standard jack plugs, a direct link output for connecting another speaker, and four rotary controls governing the input level and a three-band EQ. The only preset user option is a slide switch that engages an 80Hz low-cut filter, which is useful particularly for speech-only applications. Having said, that there is no microphone-level input option, so it isn’t really designed to be a one-box solution — a line-level input signal is going to be needed to achieve full output. 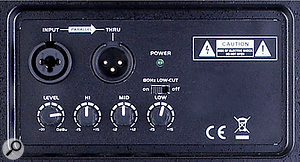 The rear panel is where you’ll find the input ‘combi’ and output XLR sockets, as well as an input gain knob and three-band EQ section.The 212A isn’t equipped with warning lights other than a power on LED (there’s one on the front grille as well) so, all in all, self-powered speakers don’t come much simpler and easier to operate than this one — there really is nothing to confuse even the newest of newcomers!

Switching on the 212A produced a quiet click from inside, followed by another a second later as the (I assume) output relay dropped in, so there’s no switch-on thump to worry about — and the 212A was just as quiet when powering down. I couldn’t hear any idling noise from the drivers even with all four knobs fully up, so I guess there’s some gating going on in there, but applying a music signal produced a pleasant enough output with plenty of low-end balance at modest volumes. At louder levels the 212A sounded reasonably well balanced but with a fairly pronounced upper mid-range. Provided it’s not driven into limiting (it’s fairly obvious when this happens so it should be easy to avoid) the output retains its dynamics pretty well at what I’d consider it’s maximum operating level. The overall power rating in the specification is based on the drivers’ power handing, which is 300 Watts RMS for the woofer and 40 Watts RMS for the HF unit, and Studiospares point out on their web site that this really is an RMS figure, as opposed to some manufacturers who have been known to quote peak power (often forgetting to mention this), which I suppose could lead some potential purchasers astray. What is more meaningful in any case is the actual output the speaker can produce, and in this case it is given in the specification as 126dB SPL.

I did a quick (admittedly unscientific!) measurement using two different sound level meters and my quick-n-dirty foam box test (just for rough checks, I build a double box of four-inch foam blocks around the speaker in the studio live room, with the measuring point 1m away from the horn mouth) and did indeed measure a maximum reading of 126.4dB (both meters concurring), on the A-weighted setting and with a pink noise signal.

I also used the 212A speakers for a band rehearsal in the studio — not much of a challenge as it’s only around 250 square feet and there’s no audience, but the band were playing at full volume and the vocals and keyboard came through well. I then lent them to a local group for an outdoor event where they did a good job, covering quite a large area with background music, announcements and backing tracks for dance displays.

There’s not much more to say about the Auditorium 212A speakers really; they are just about the easiest to use and least complicated powered units I’ve seen for some time; they are sold by a long-established UK retailer (who in the business hasn’t heard of Studiospares for goodness’ sake?); and spare parts are readily available should you need them. The 212A is a good-looking and very affordable general-purpose active speaker which will find many applications in smaller venues.

There’s plenty of competition at this level, from the likes of Electro-Voice, Samson, Behringer, Mackie, Alto and LD Systems.

A simple, no-frills speaker that simply does its job while being both affordable and robust.

$520 excluding shipping from the UK.