When you switch on Source Audio’s EQ2, a monochrome LCD displays a 10‑band equaliser which covers 31Hz to 16kHz and offers turn‑and‑press adjustment of levels. Pressing and holding the encoder takes you to a deeper editing level, though this side of things is more easily handled using the free Neuro software editor; there’s an iOS and Android version for mobile devices, as well as a desktop one for Mac OS and Windows. A small, blue illuminated knob sets the output level (per patch), with up to 12dB of Clean Boost available, while to the left four LEDs and a button are used to select and store four presets (eight in ‘extended mode’). You can access 128 preset locations by turning the encoder while holding the Preset Select button. It’s also possible to scroll through presets by holding down the footswitch. 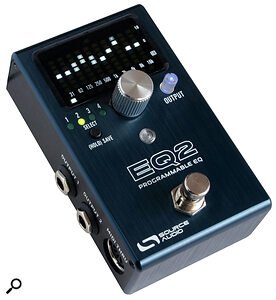 The EQ filters can be switched to work in parallel, for graphic EQ use, or in series, for parametric EQ. The parametric bands can be set anywhere between 20Hz to 20kHz, the gain range is ±18dB, Q is adjustable, and the outer bands can be switched to operate as shelves. To simplify operation, an auto mode recognises which inputs and outputs are being used, and sets up the internal routing accordingly, choosing Mono‑to‑Mono, Mono‑to‑Stereo, or Stereo‑to‑Stereo modes. If you need more specialised routing or control input options, those can be set up using the software editor. A Split mode allows the setting up of a different EQ curve for each of the pedal’s two outputs.

Input one is the main instrument input. Input two (TRS jack) is used when the source is stereo (audio on the tip) but it also doubles as a data connection (using the ring) to a mobile device when using the Neuro app or when chained to another compatible Neuro pedal. Output one is the main audio output, and output two can be used as an audio output when running in stereo, or as a daisy‑chain data connection for the Neuro app.

Sonically, the EQ2 puts in a very solid performance, sounding much like a really good‑quality plug‑in parametric or graphic EQ.

As with Source’s other One‑series pedals, the EQ2 has full MIDI compatibility, including MIDI CC access to all relevant controls. As well as the USB port, for two‑way communication with the Neuro app, the pedal has five‑pin DIN MIDI I/O. If you’ve read our reviews of previous One‑series pedals, you’ll know that they can be linked to form a single system using the optional Neuro Hub. This can host up to five pedals and store up to 128 ‘scenes’, which hold the settings for all the connected pedals, and can be used in conjunction with a standard MIDI controller. An External Control TRS mini‑jack links the EQ2 to optional expression pedals and footswitches for more real‑time control or patch selection.

Sonically, the EQ2 puts in a very solid performance, sounding much like a really good‑quality plug‑in parametric or graphic EQ. There’s an in‑built limiter to help out if you push the levels too high, and there’s also a gate, which can be handy if using EQ2 in a high‑gain distortion chain. Adjustments using the Neuro desktop editor are as easy as using a plug‑in, but it’s great not being confined to working in the box if you use outboard instruments or pedals. Even though the Neuro Hub opens up many possibilities, the EQ2 is seriously impressive when used as a standalone pedal.