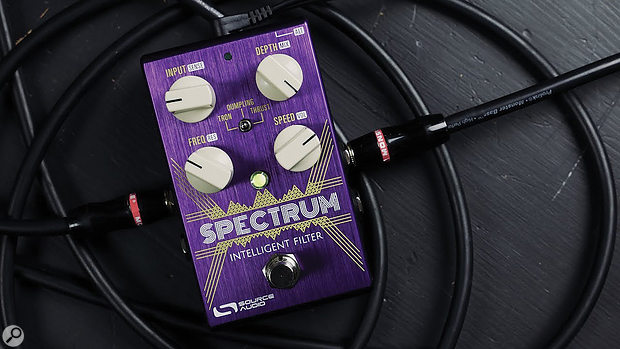 The Spectrum is a stereo-in/out digital pedal that's also able to work in mono, and the user has a choice of buffered or true bypass. It can store presets, is MIDI controllable, has a jack for additional control and may be teamed with the company's Neuro Hub and other One-series pedals to form an integrated system. It comes with a power supply and a breakout cable for use with the free Neuro mobile app (iOS/Android) and editing software (for Mac/Windows). As well as emulating certain classic envelope filters, the Spectrum can offer some synthetic sounds, using octave up/down pitch-shifting, distortion and a choice of filter types that includes all the synth favourites plus phasing. It's also possible to combine two different filter types in series or parallel. While the Spectrum offers a lot of variety right out of the box, and a lot may be adjusted using a few simple controls, the software allows you to explore its capabilities in much greater depth. 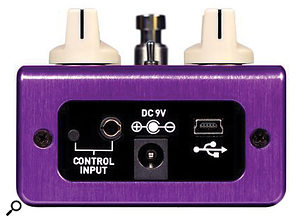 Source Audio have been able to pack so much into this compact pedal by giving the onboard controls a secondary function. To access this you press a rear-panel Alt button, and a small green LED winks to let you know you're in Alt mode. It will stay in that mode as long as you keep twiddling the controls or moving the preset switch, and drop back into normal mode after a few seconds of control inactivity. There are also three user modes selectable in the app: Standard, for a conventional WYSIWYG stompbox experience; or two Preset Modes, one of which remembers any control changes if you bypass the pedal. It's possible to connect an optional external expression pedal, Hot Hand controller or tap-tempo switch to the mini Control jack on the rear panel.

Setting it up as a straight envelope filter is easy and offers lots of flexibility, with adjustments for Input Gain, Sensitivity and Speed, Frequency, Resonance, Depth and Mix. The filter can go from fast, resonant wah effects at one extreme, to quite smooth, almost ambient filter effects at the other. But the addition of pitch-shifting and distortion puts some very synth-like sounds on the table too.

It's also very useful for synths — indeed, I suspect modular-synth fans could get a lot of mileage out of a Spectrum filter.

A three-position toggle switch (labelled Tron, Dumpling and Thrust) is used in conjunction with the Alt button to access six different factory presets. You can tweak these, of course, and these presets can be replaced with settings of your choice using Neuro. The pedal also supports MIDI (via USB or a Neuro Hub), providing CC parameter control, LFO sync and the ability to store and access up to 128 presets. Open the editor and you'll see a surprisingly wide choice of filter, distortion and envelope-follower types, routing options and both envelope and LFO control. Presets created by other users are also available to download via the App.

The Spectrum pedal works equally well when used with guitar or bass, and the fact that it can operate in mono or in stereo means that it's also very useful for synths — indeed, I suspect modular-synth fans could get a lot of mileage out of a Spectrum filter.

The octave/distortion/filter effects work particularly well on bass guitar. Obviously the monophonic pitch-shifter won't track chords — but as long as you play single-note lines, it's very forgiving and consistent, and of course the pedal works fine on chords if you're not using that effect. While familiar funky wah effects are easy to achieve and sound very polished, I often found myself drawn to the subtler, lower‑Q filter settings, for which the results turned out to be much more controllable than with other filter pedals I've used. All in all, this really is a filter that can handle anything!