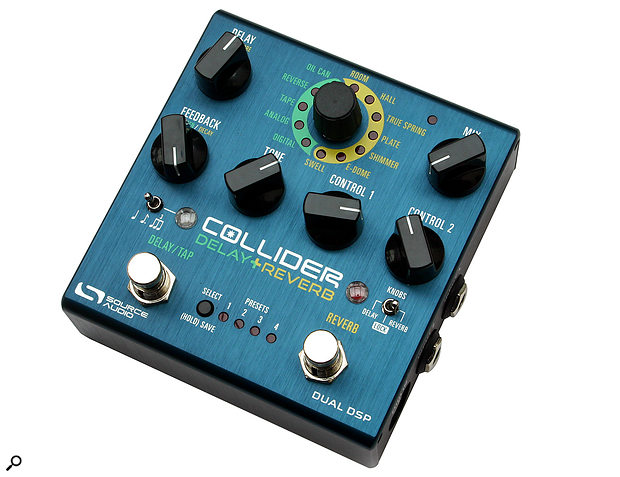 Source Audio pedals are a little unusual, in that they not only store presets (up to eight of which are accessible from the front panel, or 128 via MIDI), but they can also be integrated with other Source Audio pedals, to form a symbiotic system that's controlled either from an optional 'Neuro Hub' or via MIDI. There's also a free Neuro app for mobile devices and a desktop version for Mac and Windows OS.

The Neuro software uses input two's jack ring contact as a Neuro App data input, and it caters for alternate routing options, such as changing the effect order or running effects in parallel. Of course, there's also a sound editor for creating presets. You can take the pedal at face value, if you prefer, using it as a regular stompbox, but the comprehensive MIDI support also allows it to be used as part of a MIDI-controlled rig (even if you don't have a Neuro Hub), in which you can access controls using CC messages as well as implementing patch change messages.

Stereo ins and outs allow for any permutation of mono/stereo input or output, and the dry signal path remains analogue — so there's no loss of sound quality or character when the pedal is in circuit. A Control mini–jack input accepts a tap-tempo switch, Source Audio's Dual Expression Pedal, their Reflex Universal Expression Controller, a Neuro Hub or a Hot Hand Motion Controller. This input has its own mini button on the back panel — when held down this also allows the Mix knob to be used as a master volume adjustment. There are also a quarter-inch Pedal In (which can host an expression pedal or a switch, with a choice of assignments), a mini USB port, and a socket for the included 9V PSU. The user can use a power–up routine to select from relay-switched bypass or a buffered bypass that allows the delay trails to fade naturally. A power-up routine is also used to switch from the default four-presets mode to eight.

No Higgs Bosons were harmed in the creation of the Collider, which is essentially a dual–DSP marriage of Source Audio's Ventris reverb pedal and their Nemesis delay. It's presented in an almost identical format to those two, but presets can combine two effects from either or both. There are fewer effect choices than on the separate pedals, of course, but all the important ones are included. By default, a patch comprises one reverb and one delay, either of which can be bypassed if you only need one effect. A 12-way rotary switch selects from seven reverb and five delay algorithms, and to get the most out of the control knobs, there's a small toggle switch that lets you select whether the knobs are controlling the reverb, the delay, or are locked to prevent accidental adjustments being made during performance.

All this functionality would be for nought if the effects weren't just a little bit special — happily, then, I have to say that they are up there with the best that the pedal world can offer.

Dual footswitches offer independent bypass for the reverb and delay effects, as well as accessing the tap-tempo and hold effect functions. The latter freezes the reverb tail to create pad-like drones — anybody into ambient music is going to love this pedal. When the effects are bypassed it's also possible to use the footswitches to move up or down though the presets. Presets are selected or saved using the button and bank of four LEDs at the bottom of the front panel, and the Delay/Tap stomp-switch is accompanied by a smaller toggle switch offering three choices of subdivision. There's a routine to 'unlock' the effects selector, so that a preset can be made up of two delays or two reverbs — should you feel the urge. By default the delay comes first, feeding into the reverb.

Each effect is clearly labelled around the selector knob, with a ring of LEDs indicating which is active. Delay sets the delay time or reverb decay, Mix adjusts the wet/dry balance, and Feedback sets either the delay regeneration or the reverb decay time. Tone does pretty much what you'd expect for the selected effects, while the Control 1 and Control 2 knobs take on different functions depending on which reverb algorithm is selected; in delay mode they're used to affect the modulation rate and depth. 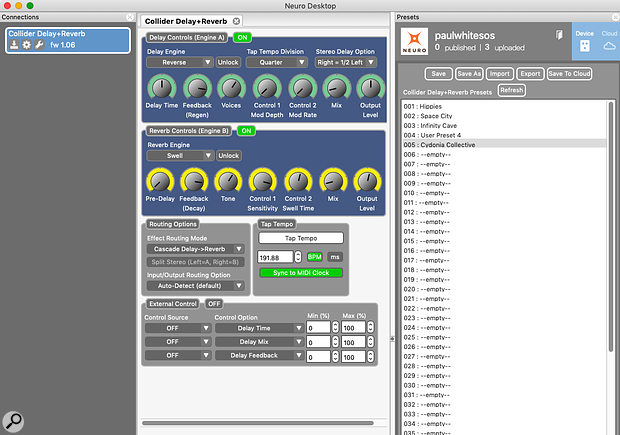 Operation from the front panel is straightforward, so let's consider the effects themselves. In the delay section, we get the choice of Analogue, Digital, Tape, Reverse and Oil Can, while the reverb section gives us the expected Room, Hall, and Plate, an authentically drippy-sounding Spring plus a lovely octave-up Shimmer, and the huge-sounding E-Dome. There's also a Swell reverb that puts a slow attack on the dry sound before feeding it into the reverb engine. These are powered by two independent 56-bit processors, so any two-effect combination of delay/reverb, delay/delay, or reverb/reverb is possible without compromising on the effect quality or imposing restrictions on what can and can't be combined.

All this functionality would be for nought if the effects weren't just a little bit special — happily, then, I have to say that they are up there with the best that the pedal world can offer. The analogue and tape delays have a dreamy, analogue quality that sits them perfectly behind the dry sound, while the reverbs wouldn't be out of place in a studio session. I particularly like the Swell effect and, of course, the ubiquitous Shimmer, which pair up well with the analogue or tape delays. The reverse delay works well too, either for creating 'backwards' guitar solos, or simply for adding texture to a sound. If you need to know more, look up our reviews of the Nemesis Delay (SOS December 2016) and the Ventris Dual Reverb (SOS June 2018), both of which are free to view on the SOS website.

There's nothing not to like about this pedal. It will handle most needs using its simple front-panel controls, but if you want to dig in deeper you can. It sounds lovely, the editor software is friendly, and the pedal doesn't occupy too big a space on your pedalboard. So if you're in the market for something beyond the ordinary then the Collider should definitely be on your 'must try' list.