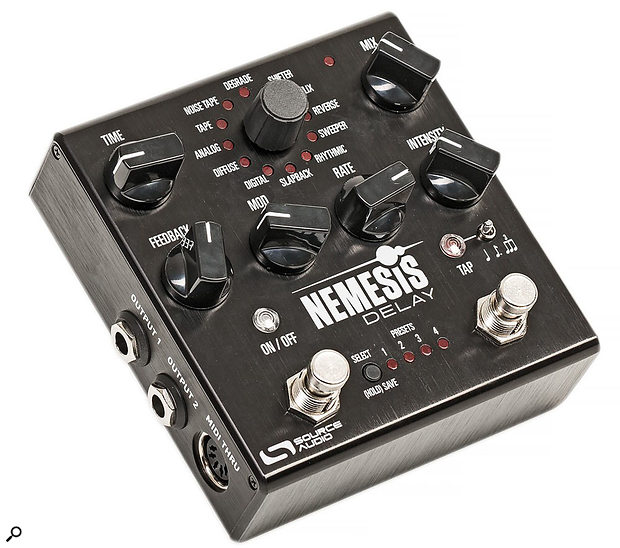 Source Audio are really pushing the boundaries of delay processing with their latest One-series pedal, the Nemesis Delay. Out of the box, it offers 12 different delay types (which Source call Engines), including rhythmic, filtered and pitch-shifter variants, but up to 12 more are available to download via the free Neuro iOS/Android app. Downloaded delays can replace existing Engines or be loaded into user preset memories. Up to eight user presets (four by default, four more by engaging a preset extension mode) can be called up via the onboard controls, and up to 128 presets can be saved and recalled via MIDI program changes. Existing delay types can also be edited using Neuro, which offers access to more parameters than the physical pedal. Intriguingly, control over multiple pedals is possible using the optional Neuro Hub, which connects via the Control Input jack on the top of the pedal. On the face of it, this seems rather like a wired alternative to TC Electronic’s Toneprint facility, but in reality it can go much further.

The Nemesis, built into a practical aluminium case, has stereo inputs and outputs, allowing other pedals in the series to be connected in-line. Input 2 is also used for connecting a mobile device — this TRS socket’s ring contact acts as a data connection, via the included TRS eighth-inch to quarter-inch cable. This input can also accept daisy-chained Neuro data from another Neuro-compatible pedal, provided a TRS cable is used for the connection; audio passes via the jack’s tip, so stereo use is not affected by the control data. The Nemesis monitors its input and output connections and configures itself for mono or stereo operation according to what’s plugged in, though the routing can be changed from the default via the app. It’s even possible to set up input/output 2 as an effects loop.

Inside, 24-bit conversion and a 56-bit signal path are employed, and power comes from an included 9V centre-negative switch-mode PSU; most pedalboard PSUs will be compatible, assuming they can deliver the required current. Sharing the rear panel with the power inlet is a quarter-inch jack and a 3.5mm Control input jack, both of which can be used to add external switches or pedals. The Control jack also provides a link to the Neuro Hub. There’s a a mini USB port too, and conventional five-pin MIDI in and thru ports are fitted to the sides of the pedal alongside the audio jacks. The Nemesis is a class-compliant MIDI device.

Clearly, then, this isn’t your average delay pedal! But even if you ignore the external control/edit options, it’s still impressively versatile. On the main panel are controls for feedback, modulation, rate, time and mix, plus a rotary delay-type selector and an Intensity control, which changes function with the selected delay type.

Two footswitches service bypass (buffered or unbuffered, as you select) and tap-tempo functions, for which a mini toggle-switch sets the tempo division. In between are four LEDs and a select button which moves between four user presets and can be held down to save the current settings. The bypass and tap switches have large LEDs, and the tap’s one flashes at the current repeat rate. If the tap switch is held down, a loop of ‘frozen’ delay repeats until the switch is released.

The delay types start with a rockabilly Slapback, then Digital, which is clean but can be given delay time modulation plus filtering via the Intensity knob. Diffuse produces a more ‘smeary’ delay character while Analog emulates BBD analogue circuitry, so the delays are far less bright than from a digital delay. Tape gets close to the Echoplex sound, while Noise Tape is a more grainy, less bright alternative — think worn tape. Degrade provides a deliberately lo-fi digital delay via bit-crushing and sample-rate reduction, while Shifter combines delay with pitch-shifting to offer a choice of an octave up, an octave down, and minor or major thirds and fourths, or fifths, the interval being selected via the Intensity control. Helix combines reverse delay with octave pitch-shift to create a nice shimmering delay that works well for ambient styles. The more familiar Reverse setting emulates a backwards tape sound by generating several overlapping reversed delays, with an element of amplitude modulation. Sweeper’s resonant low-pass filter sweeps across the frequency range for more synth-like effects, while Rhythmic uses multiple delay taps, timed to produce rhythmic patterns.

The sheer depth of editability and control could be daunting if not for the fact that this pedal sounds absolutely gorgeous right out of the box, particularly the tape echo, which can cover anything from the Shadows to Pink Floyd to U2. There’s just the right amount of degeneration in the repeats plus adjustable wow and flutter to add a hint of shimmer. Analog sounds equally authentic. Diffuse is nice too, a kind of distant tape-echo effect that doesn’t get in the way. I also loved the shimmery pitch-shifted delays, which was reminiscent of some Eventide treatments. 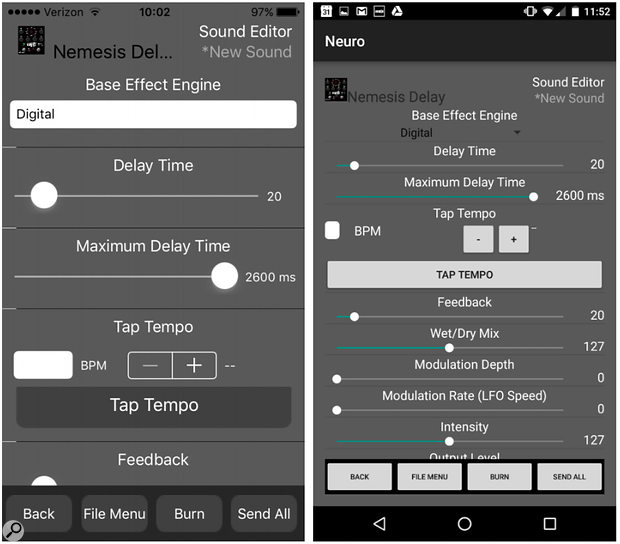 The Neuro app for iOS/Android allows much deeper editing and control than is available via the physical pedal.

The Neuro App worked fine with my iPad 3 — I just had to ensure the headphone volume was set to maximum. I could browse the factory sounds, including several alternative patches, such as Oil Can or Warped Record, and on selecting ‘Open In Sound Editor’, I was greeted by a long list of faders that control the front-panel parameters and a whole lot more. This aspect of editing is very straightforward, although even on an iPad they don’t all fit on one page, so you have to scroll to access them all. After the familiar controls, it’s on to things like tap panning, distortion, filtering and so on. The MIDI side of things opens up more possibilities for those with MIDI controllers. And if you use the Neuro Hub, it allows multiple Source pedals to behave like a single, fully editable, multi-effects unit, which can be really useful.

To sum up, Source Audio have built a delay pedal that should appeal to everyone: if you just want a pedal you can turn it on and use it, and the presets sound great, but if you’re a tweaker or want more preset options, the app provides all the control you need. Admittedly, the Nemesis costs more than the average pedal, but if you try it, I think you’ll agree that it is worth it!