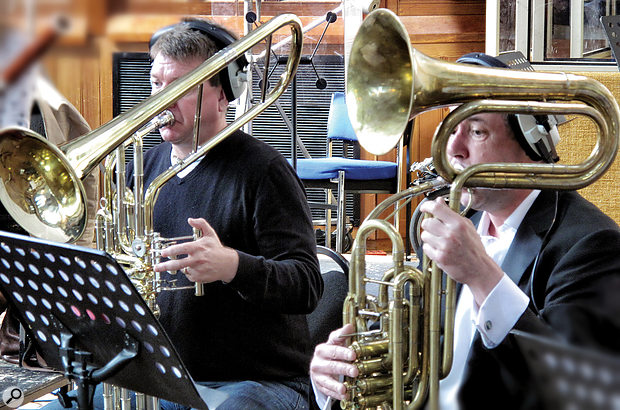 Spitfire consolidate their symphonic brass into a single bumper package.

In a departure from the BML format, SSB includes only three mic positions; additional mikings and stereo mixes are provided in an expansion pack (details below) which can be bought separately. The library will run on the free Kontakt Player as well as the full version of Kontakt, and conforms to Native Instruments’ Native Kontrol Standard (NKS) format, making it fully compatible with NI hardware such as Komplete Kontrol and Maschine.

To avoid users paying twice for the same material, Spitfire offer zero-cost crossgrades to owners of the seven BML brass libraries, with comprehensive pro rata reductions available for anyone who already owns one or more of them. Due to the revised coding used in the new library, owners of BML brass wishing to upgrade to SSB will have to download and reinstall the whole 60GB shooting match from scratch — bad news if you’re one of the 5.7 million UK residents who can’t access fast broadband. Another potential issue is the 120GB of disk space required for the initial installation. Fortunately, Spitfire’s affordable hard drive delivery service offers a potential solution to both problems.

Anyone wishing to re-visit BML-based projects is advised to keep the original libraries intact on a back-up drive. Some of SSB’s patches have been renamed and tweaked, so although you could probably do a very close approximation of your BML arrangements using the new patches, it would be far simpler and quicker to load the old libraries!

SSB’s samples were recorded in AIR Studios’ hall with players seated in their correct concert positions, so all instruments and ensembles will work together in a mix without the need for extensive panning and re-balancing. Continuing a practice instigated in the company’s Albion libraries, the musicians’ performances were recorded to Pro Tools at 96kHz via two-inch multitrack tape with Dolby SR noise reduction, a somewhat convoluted lash-up which delivers a convincing combination of pristine 21st-century sound quality and old-school analogue warmth.

The overview panel shows a list of articulations contained in the patch, along with a close/far slider which automatically selects the appropriate mic position and purges the other positions’ samples from memory (a good time-saver).

The library’s new Kontakt GUI features three screens: the main overview panel shows a list of articulations contained in the patch, a general controls panel contains the mic mixer and various controllers, while the Ostinatum sequencer creates automatic, user-configurable repeated patterns which can add instant rhythmic propulsion to a score. This feature is designed to work with short notes, so its screen icon may appear greyed-out until you select a short-note articulation such as staccato or marcato. I was pleased to see the ‘Punch Cog’, a handy facility which allows you to remove and/or tweak the tuning of any sample used in a patch, is included for all patches.

Replacing a conventional manual, a built-in help system opens text windows as you navigate around the GUI. Once you know the ropes, these ‘help-bubbles’ can be deactivated by clicking on a button.

Phalanx For The Memory

You want epic? SSB does epic. Formerly known as Horn Phalanx, Trumpet Phalanx and Bone Phalanx, the library’s six-player sections are the stuff of trailer composers’ dreams, offering majestic orchestral brass textures on a blockbuster scale. I enjoyed the six trumpets’ full-range legatos, which enjoy good, tight tuning right across their G3 to D6 range; their legato patch works wonderfully well for soaring melodic themes, though very fast passages can lose definition due to the amount of hall release sound in the samples. These trumpets’ sustains aren’t short of power, but if you want to go ‘one louder’, you can dial up the cuivre articulation for added bite and brassiness. For more extreme excursions, layering that style with the short-note tenutos makes a tremendous, stirring din.

Built on a foundation of one contrabass and two bass trombones and topped off with three tenor instruments, SSB’s large trombone ensemble boasts a low end of Jurassic proportions. Its version of the cuivre style is scarily fierce; irresponsible composers can unleash its full effect on their listeners, or feed it in behind the regular long notes to increase the overall brassiness. The six trombones’ legatos are on a par with the trumpets, displaying the same fine ensemble tuning. One small gripe: I wish their upper range extended to C5 rather than the current F#4.

The BML’s lack of a solo trombone is rectified here by a tenor trombone with a pleasingly warm, rich and enveloping tone which runs the gamut from engagingly soft to bossily brassy over its G1-C5 range. By contrast, the spiky, attentuated, sharp-toned timbre of its muted notes sounds superbly sinister. A great set of falls and rips makes me yearn for a full trombone portamento slides patch — the effect of the ‘golden handbrake’ is one of the trombone’s distinguishing features, so I hope Spitfire will make it available at some point.

A solo bass trombone matches the tenor instrument for precision, quality and tonal range, performing some stunningly powerful cuivre deliveries. Also noteworthy are the bass trombone’s flutter tongues, which sound like an elephant having a psychotic episode. In the bloopers department, the bass trombone’s rips patch switches between falls and rips on alternate notes, and neither of the new trombone’s vibrato sliders work — in fact, it makes the tenor instrument’s top A go out of tune, which I doubt was the intention. At the time of writing the solo tenor and bass trombones lack legato patches. These have been promised in a free update.

Also making its debut in SSB is a high-cholesterol contrabass tuba of impressive profundity and bass magnificence, playing a handful of basic articulations. Its long-note loop points are rather obvious, but you probably won’t notice them in a mix.

Composers will find plenty of inspirational material in the library’s ‘a2’ (duo) and solo instrument patches. Highlights include a French horn duo who play some tremendous, regal-sounding ‘bells up’ performances (now expanded) and a thoroughly uninhibited set of rips and falls (was alcohol involved, dare we ask?). The solo French horn now performs its own versions of these effects, along with trills and leery flutter tongue sustains.

SSB’s solo trumpet repertoire has been similarly expanded to include trills, multi-tongue, flutter tongue and a small menu of effect glissandos. Also included is the raucous, vibrato-heavy Mexican Mariachi style, and on a more subtle note, long and short notes played with a straight mute. While the muted longs have a baked-in delayed vibrato, the trumpet’s very nice legato patch offers allows you to crossfade between the straight and vibrato notes, which sounds impressively natural and artifact-free.

Other playing styles of note include the cool Multi-tongue articulation; this adds two, three or four fast repeated grace notes to the front of the notes, with the ‘variation’ slider on the GUI controlling the number of repeats. The speed of the repeats can be tempo-sync’ed, with a setting of 120 bpm maintaining the original (undocumented) playing speed. The slider can also be used to switch between fast and slow falls and rips.

Velocity-switchable Fanfare patches provide a handy way of performing very fast, fanfare-like figures: you can switch between fast short notes, a fuller staccato note and a triumphant held note at the end of the fanfare. Unfortunately the highly effective BML two trumpets’ Fanfare Sculptor patch is missing, which I assume is an oversight.

(For further comments on the instruments, please see my SOS July 2015 review of the BML series.)

SSB uses the standard Close, Tree and Ambient mic positions provided in most Spitfire libraries, thereby covering all the bases for 5.1 mixing. Unreleased at the time of writing, the SSB Additional Mics & Mixes expansion pack includes the wider Outriggers miking used in the company’s BML range, along with Stereo (closer to floor level than the Tree, with a more direct and immediate sound), Gallery (very distant) and Close Ribbons (vintage ribbon mics) positions. Also included are three stereo mixes by engineer Jake Jackson: Broad features a cinematic/symphonic hall ambience, Medium has less hall and is more intimate-sounding, while the more detailed, close and immediate Fine is optimised for pop.

The omission of the formerly-included Outrigger mics has provoked complaints, understandable since there’s room for a fourth position on the GUI mic mixer and Spitfire’s Paul Thomson often uses a blend of the Ambient and Outrigger mics in his video walkthroughs. That said, potential buyers should reflect on the massively cheaper price of SSB-plus-expansion-pack compared to the combined cost of the seven original BML brass libraries.

So there we have it, the ‘modular orchestra’ concept announced by Spitfire in January 2013 is now being retired. I can see this development two ways: the modular approach enabled prospective buyers to dip their toes in the orchestral water before plunging into a full symphonic collection, after which further purchases could be spread over a period. On the other hand, the consolidation of multiple titles into a single, unified entity makes them much easier for the company to maintain and update, which one hopes will soon translate into a fresh round of articulations for the instruments.

Regardless of presentation, the samples in this collection maintain the high musical and sonic standards Spitfire Audio are known for, and are a great all-in-one resource for composers who need top-quality, big-sounding, on-the-money orchestral brass.