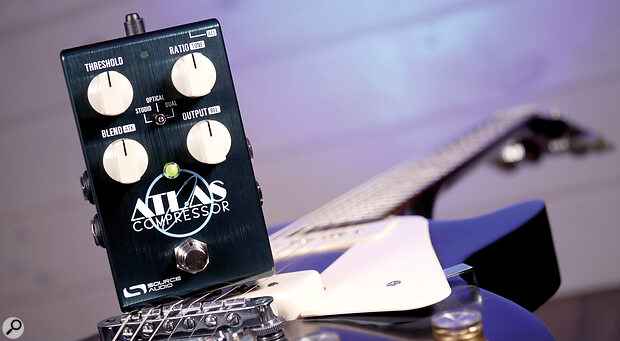 Just another compressor pedal? Not at all! Right out of the box, the Source Audio Atlas compressor, designed in collaboration with Christopher Venter of SHOE pedals, offers six types of digitally modelled compression based on revered studio hardware such as the LA‑2A and 1176, and classic LED‑driven optical compressor pedals. A‑D/D‑A conversion is 24‑bit, with a real‑world dynamic range of 110dB, while the digital path is 56‑bit. Inside are two separate stereo compressors that can be configured in series (one after the other) or parallel (each processing the signal separately), and there’s a Band Split mode that has separate controls for the high and low frequencies.

In addition to being able to work in mono or stereo with a host of routing options, the Atlas can store 128 MIDI‑accessible presets, respond to real‑time MIDI parameter control, integrate with Source’s familiar Neuro Hub and be tweaked at a deeper level using the free Neuro Editor software. It’s also possible to use the Atlas with line‑level signals, as long as you don’t get too generous with the levels, which means that it’s not only for guitar — it could double up as a studio compressor. The maximum input level is +8.76dBu, which equates to 6V peak to peak, and the maximum output level is the same.

There’s a lot of sophistication for a compact pedal with just four knobs, and the six factory presets cover a lot of ground.

The key controls are on top of the pedal: Threshold, Ratio, Blend (wet/dry) and Output. Secondary knob functions allow control over Make‑up Gain, Tone, Attack time and Release time, and these are accessed using the small Control button on the rear. The Tone control response changes according to the selected compressor type. A three‑way switch selects from Studio, Optical and Dual modes, with two bank options providing access to the six presets. Bank switching is achieved by moving the toggle switch while holding down the Control button — the bypass LED changes from green to red when the second bank is active. To avoid excessive level changes as the amount of compression is adjusted, the Atlas includes an auto make‑up gain feature, though you’ll probably also need to adjust the output level.​ Other pro niceties include a switchable bass‑guitar mode, activated by holding down the Control button at power‑up.

The bypass footswitch (configurable for true relay‑switched or buffered bypass) shares a dual‑colour LED that doubles as a bank indicator and a gain‑reduction meter, which shows for a few seconds after any adjustment is made to the Threshold or Ratio.

On the rear is an inlet for the included 9V, 300mA switch‑mode power supply, and if using the Atlas with a pedalboard PSU a supply capable of 165mA or more is required. There’s also a control input 3.5mm mini‑jack, used for connection to external control devices such as a Source Audio Tap Tempo Switch, Dual Expression Pedal, or Neuro Hub. Next to the Control button is a mini‑USB port for connection to a Mac or Windows PC hosting the free Neuro Editor. There’s also an iOS/Android Neuro Mobile app. If a third‑party USB MIDI controller is connected, the pedal can be used to store and recall up to 128 presets. Many of the compressor parameters can also be controlled via MIDI Continuous Controller messages. A control status LED is located top centre on the front panel.

There are pairs of quarter‑inch jack sockets for the inputs and outputs, to accommodate stereo signals when required, and input 2 can also connect to the Neuro Mobile app from a phone’s headphone jack. Similarly, the ring contact of output 2 can be used to link through to another Neuro‑enabled device. Up to three parameters can be controlled at once using a Source Audio Dual Expression Pedal and its 3.5mm jack and a 3.5mm TRRS cable.

The default presets are Studio Snap, which uses two different compressor settings in parallel to manage RMS and peak levels; Optical (LA‑2A style); and Dual Band, which splits the signal at 333Hz. Bank 2 has another Studio setting, this time emulating the 1176, as well as an optical pedal emulation and a dual‑compression preset. The last is designed to add jangle to guitars by splitting the band at 2kHz. Additional presets are available via the Neuro Editor and can be loaded into the pedal for access via MIDI or used to replace one or more of the existing six presets. 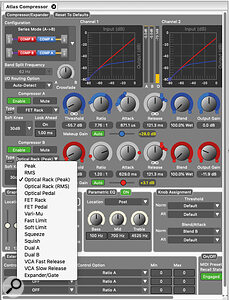 The Neuro Editor, displaying a list of the different compressor types offered.Using the Neuro Editor, there’s scope for some very deep editing, including applying look‑ahead compression, soft‑knee compression, multiple signal routing options that include side‑chain compression with side‑chain filters, an eight‑band graphic EQ, a parametric EQ and flexible knob assignments. When set up for side‑chain compression, the input 2 jack dictates the amount of gain reduction applied to the signal fed in via input 1. There are two other modes available in the Hardware Options section of the Neuro Editor: Preset Mode, which allows the user to save any adjustments by simply pressing and holding the footswitch for a few seconds; and a WYSIWYG Mode, in which the physical knob positions always reflect the parameter values.

There’s a lot of sophistication for a compact pedal with just four knobs, and the six factory presets cover a lot of ground. Even though the settings are presets, you are still likely to need to adjust the Threshold control as the pedal doesn’t know if you have a guitar with hot humbuckers or low‑output single‑coil pickups, but if you are hooked up to the Neuro App, you can always re‑save your revised settings in place of the factory presets.

Plugging in a Telecaster, I was impressed by the very first preset, which adds a touch of country‑style snap while also adding welcome sustain. The Blend control is useful because by mixing in some of the original sound, note attacks sound more natural, while the compression lifts the level as the note decays. The usual studio trick when using parallel compression is to apply heavier compression when mixing in some of the dry sound, and that works beautifully here to preserve a natural sound with more of the original note attack dynamics intact but with extra sustain blending in as the original note or chord decays. The various optical options provide a slightly different but no less attractive style of compression, reminiscent of pedals such as the Dan Armstrong Orange Squeezer and the original MXR Dyna Comp pedal. Again these bolster the note sustain in a flattering way. I also really liked the effect of the Split Band Jangly preset, which really helps lift the sound out of the mix.

In conclusion, then, Atlas is an impressive‑sounding compressor but also very versatile, with applications that go well beyond guitar and bass. In true Source Audio fashion it’s deeply and easily editable using the free Neuro software, though most guitar players will already find what they need amongst the presets. Whether on a pedalboard or in the studio, the Atlas should make a lot of friends.