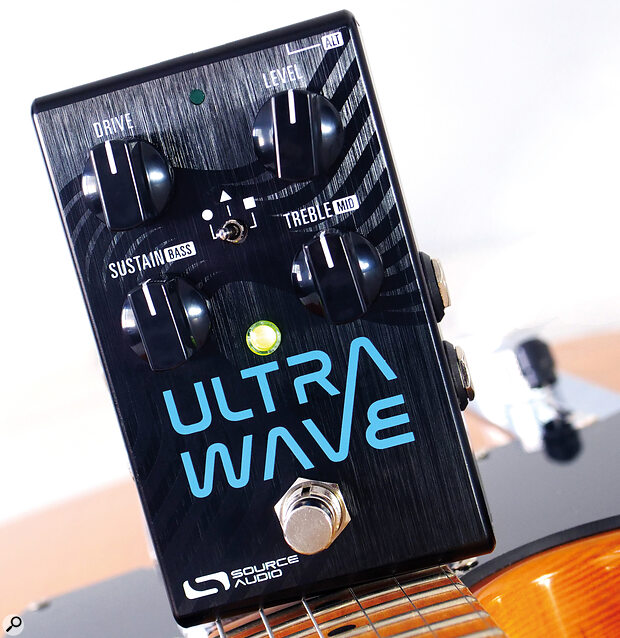 This powerful digital stompbox is far more than just a distortion pedal...

Source Audio’s Ultrawave pedal, a member of their One Series line, expands on an idea explored by Craig Anderton back in the 1970s when he built an analogue, four‑band fuzz device (the Quadrafuzz) in order to produce fuzz with fewer intermodulation artefacts. Then, in 2007, Bob Chidlaw took the concept of multiband processing and experimented further using foldback distortion curves rather than just clipping or nonlinear saturation, which introduces some interesting harmonic complexity. The outcome was the Source Audio Multiwave distortion unit, but Ultrawave takes advantage of today’s powerful DSP chips to put a serious amount of multiband processing into a compact pedal that can be used to process mono or stereo signals. The Ultrawave requires an external power source to operate, and a suitable 9V PSU is included.

I’ll say at the outset that if your dream of tone heaven is sounding like Angus Young or Paul Kossof, Ultrawave probably isn’t for you. While it does have a gentler side and can produce a few conventional distortion‑type sounds, it is really geared towards the experimental musician who is keen to explore more synth‑like sounds. You can use Ultrawave as a single‑band processor, but in multiband applications you have a choice of splitting into two, three, four, eight or 10 bands, which generally produce more interesting timbres.

The LFO In The Room

Ultrawave can be run in mono or stereo, and when using a stereo output, each channel can be set differently, including distortion types, tremolo types and LFO rates, to create expansive stereo effects. To make Ultrawave manageable, some of what goes on under the hood is arranged as preset menus (tremolo modulation patterns and so on), but there’s a lot of creative scope made possible via the free Neuro mobile or desktop app.

The Source Audio Neuro app offers deep editing of the Ultrawave’s distortion, LFO, EQ, dynamics and routing settings.Once the audio has been split into its separate frequency bands, Ultrawave can apply one of 44 different types of distortion to the bands, and also apply tremolo to the individual bands to create swirly or arpeggio‑like textures. There are numerous distortion types on offer including Tube, Diode, Foldback (wave folding), Octave Up and others. Some include gating so you can get that spluttery, old‑school ‘fuzz with a dying battery’ sound. The Octave Up distortion is reminiscent of the Octavia pedal used by Jimmy Hendrix on ‘Purple Haze’ and other songs. Ultrawave’s tremolo is all driven from the same LFO, though the phase can be offset for each frequency band according to the tremolo preset you select, which is what creates the sense of harmonic movement. A compressor, which can be switched pre‑ or post‑distortion, keeps the levels under control, and there’s a global output graphic EQ. Note that the tremolo does not operate if the distortion type is set to Off.

The input can be a guitar, bass or synthesizer, and after splitting, each band has its own set of adjustable drive and output level faders when distortion is active. For the tremolo, which can come before or after the distortion, there’s a long menu of pattern options as well as an LFO that can be set to either sine wave or an attack/decay envelope. A separate envelope generator has two controls for input gain and attack, with an input selector for assigning it to follow either input 1 or input 2. Input gain adjusts how hard you need to play in order to open the envelope, which may be used to control the balance of the two channels or modulate the LFO rate and depth. The LFO can also be used to modulate the channel balance.

The Multiband Tremolo block offers a wide choice of presets, each of which delivers individual control of each band’s rate and LFO phase, while the ability to vary the LFO waveform allows rhythmically shifting tonal textures to be set up. The LFO wave shape can be changed manually so you can go from a smooth sine wave to staccato arpeggiator‑like effects. The LFO also has a Ring Mod option tuned by the rate control. Stereo options make it possible to send different drive effects to each of the outputs and to create ping‑pong tremolo effects. Indeed, you can create two different presets for the left and right channels, or even route one channel into the other.

While the app lets you dive pretty deeply, the pedal itself has just four knobs for Drive, Level, Sustain and Treble, these affecting whichever preset is loaded. A three‑way toggle switch used in conjunction with a small Alt button on the rear panel allows six presets to be accessed directly from the pedal, or you can reach 128 presets via the Source Audio Neuro Hub. Many of the pedal’s parameters can be accessed using MIDI Continuous Controller (CC) messages, while modulation rate can be locked to MIDI Clock. Many Source Audio pedals support knob assignment for flexibility and Ultrawave is no different: each of its four knobs can be reassigned to functions chosen from a list of available parameters within the editor software. The knob assignments are set and stored with each preset.

The Control Input mini‑jack on the rear panel can be used with an expression pedal, an external footswitch, the Source Audio Tap Tempo Switch, or the Source Audio Hot Hand 3 Universal Wireless Controller. External switches can be used to swap channels, apply tap‑tempo to the LFO, and so on. The expression pedal can also be used to morph between two sets of drive/level settings and/or graphic EQ settings, as set up in the Neuro app.

If you just plug in the pedal and bash out a few random chords you might not immediately be impressed, as many of the distortion sounds can be unruly on chords, but play melodies or double stops and you’ll discover a lot of very responsive synth‑like sounds, especially when using the foldback distortion options, as the harmonic changes respond to picking intensity almost like an envelope filter. It isn’t that the pedal can’t handle polyphonic playing — it does so perfectly well, but because the various distortion modes add such complex patterns of harmonics and overtones, things can easily get excessively busy if you play big chords. The effects range from FM‑like to something akin to a synth’s phase sync, or you can activate ring modulator mode and unleash some real mayhem. There are clav‑like sounds, some excellent fuzz sounds, organ‑like tones and all manner of other transformations reminiscent of modular synthesizers to explore.

On balance, I’d say the character is definitely more attitude than ambient. Add a little delay and/or reverb and you’re into a world of magic that’s far removed from guitar normality.

While there are numerous sophisticated distortion pedals, I don’t know of any that exploit the multiband, multi‑distortion‑mode approach in such a comprehensive way.

While not a distortion pedal for rock purists, the Ultrawave provides a lot of scope for exploring alternative distortion types.