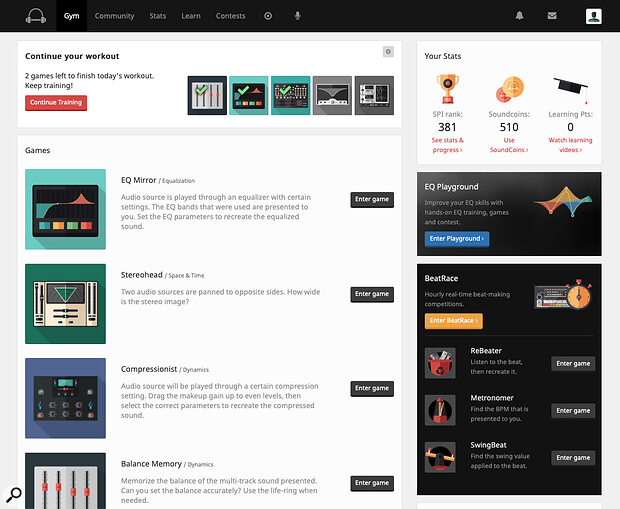 The ability to analyse what you’re hearing is a vital skill for audio engineers. SoundGym is a fun way to hone that ability.

From exercise to enterprise, practically everything seems to be gamified these days. Human beings love playing games, and respond well to competition and points‑based rankings. Consequently, incorporating game‑like elements into other activities can keep us focused, make us more retentive and bring us back to them more often. Whether that’s a good thing depends on the activity, but the benefits for education are obvious.

Gamification can make it attractive to spend time learning, then, but it also has the potential to make that time more productive. Practice is essential to learning new skills, but it’s increasingly recognised that the quality of our practice is more important than quantity. Mindless or thoughtless repetition has relatively little benefit, and can entrench bad habits. Practice is much more effective if it’s targeted, focused and guided by useful feedback. SoundGym is an educational website that uses gamification to guide ‘deliberate practice’ within an oft‑neglected aspect of audio education.

Inasmuch as most of us have trained our ears, we’ve done so incidentally and in a haphazard way. When I first started out, I used to find it amazing that anyone could dissect old recordings and reconstruct the production and engineering choices that went into them. With the benefit of a few decades’ experience, I can now make those educated guesses — but I can also see how proper ear training might have helped me get to that point more quickly!

A subscription‑based online service, SoundGym can be accessed through a web browser on a computer, tablet or smartphone. As the name suggests, it gamifies ear training using a metaphor borrowed from the world of health and fitness. The idea is that you log in regularly — ideally, every day — and participate in a ‘workout’ to progressively hone your listening skills.

Each day’s workout involves playing five games. These are drawn from a pool of 16, though some of these are closely related to each other, and I seemed to get pretty much the same ones every time. They are all focused on analysing and identifying the sorts of decisions that mixing engineers make with the tools at their disposal. Typically, the game applies randomly chosen processing of a particular type to a series of short audio loops. The player then has to match these, identify the odd one out or pick the correct answer. 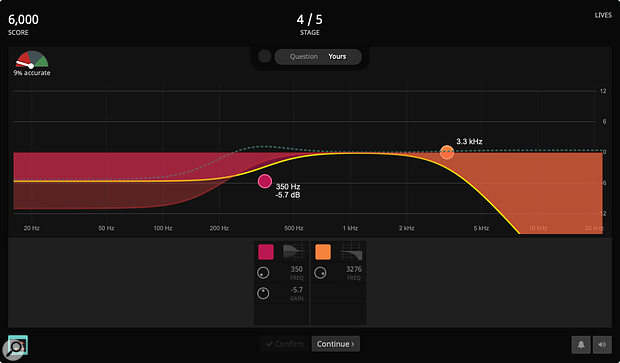 A good example is Kit Cut, where you hear an audio fragment with a semi‑random EQ cut applied, and have to recreate it by clicking and dragging within a graphical window. You can freely switch back and forth between the ‘question’ and ‘answer’ until you’re satisfied that the two match. When you submit your answer, SoundGym rates its accuracy as a percentage. Fail to achieve a certain percentage and you lose a life; get it spot on and you get a bonus. As you work through the examples, the ‘window’ narrows, meaning your answers have to be closer to qualify as correct.

There are several other EQ‑based games which work along similar lines, and an area called the EQ Playground which offers training resources and allows you to compete against other users. Other aspects of mixing are covered through games such as Balance Memory, where you hear a randomly chosen mix of four parts and then have to use sliders to recreate that balance as accurately as possible, and Stereohead and PanGirl, where you have to identify stereo width and pan position. Distorted Reality presents two versions of the same loop and invites you to choose the more distorted, and in Reverb Wizard, the challenge is to select the odd one out of three loops with reverbs applied. 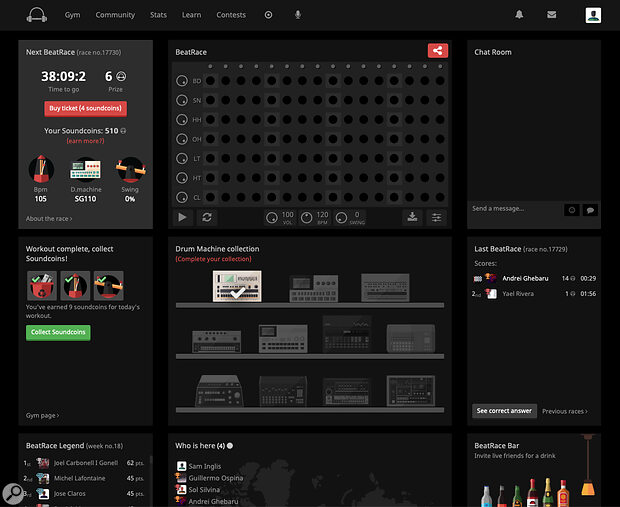 BeatRace is a fun way of improving your beatmaking skills.

As well as ‘conventional’ ear training, SoundGym also offers a separate element called BeatRace. This too is game‑based, with three tests on offer. ReBeater invites you to recreate a beat from memory using a simple step sequencer, while Metronomer and SwingBeat challenge you to identify the tempo or degree of swing randomly applied to a beat. Further musical ear training is available through a sister website called ToneGym.

Completed workouts earn you SoundCoins, which allow you to ‘buy’ sample packs or artist tracks to practice with, get discounts on tutorials and services such as LANDR, and so on. You also get extensive stats, feedback and analysis on your performance, both as it compares with other users and as your skills develop over time. You can even track how your performance varies in relation to the time of day, which could be more important than you think. There is also a strong community aspect to SoundGym, with a chatroom and regular contests in which you can pit yourself against other users.

It’s obvious from the off that a huge amount of thought has gone into the design of SoundGym. The graphic design is extremely slick, and all the games are constructed in such a way that they can be played with nothing more than a few mouse‑clicks or finger taps. There’s a big learning curve associated with ear training, but none whatsoever in getting to grips with SoundGym.

The graphic design is extremely slick, and all the games are constructed in such a way that they can be played with nothing more than a few mouse‑clicks or finger taps.

The idea of gamifying ear training seems a sound one, as does the strategy of breaking it down into separate exercises that work on very specific aspects of sound. The flip side is that, compared with games designed purely for fun, these can feel a bit repetitive, especially if you lack the competitive instinct that drives you to outscore rival players. Also, because the settings in each game are randomly generated, there’s a slight element of ‘pot luck’ to the process. For example, identifying the centre frequency of an EQ boost is much easier in the midrange of a busy synth sequence than it is on the extreme high end of a sparse drum loop. So, although there are factors that make successive levels of each game more challenging, there can also be unintentional variations in difficulty within each level. The choice of headphones or speakers as a monitor system can also make a difference, particularly in the case of Reverb Wizard.

You don’t have to be young and inexperienced to find some of these games challenging, and after a couple of weeks’ working out, my own stats were still distinctly mediocre. Though I don’t find myself using EQ or reverb differently as a result, the experience was very worthwhile, and certainly made me aware of some blind (deaf?) spots in my listening skills. However, I think those who will notice the benefit most are people just starting out. In particular, SoundGym seems — and I suspect this is no accident — perfectly targeted at educational institutions. Site licences are available, and represent a brilliant and affordable way for schools and colleges to offer useful content that their students can access practically anywhere, while the competitive aspects have endless potential to engage a class or cohort.