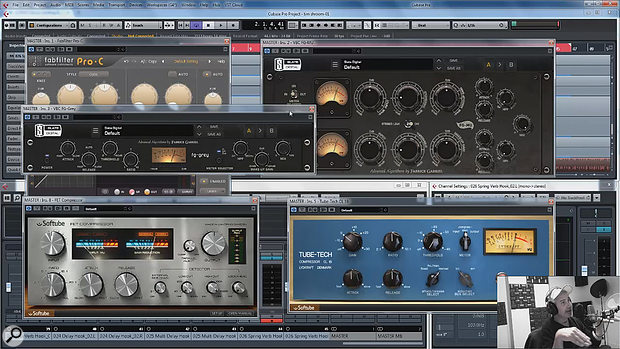 Samplecraze have recently refocused their web site around a host of producer and sound-design video tutorials, with Samplecraze’s founder (and SOS contributor) Eddie Bazil at the helm. At the time of writing, there are already 130 on offer, spread across 11 categories (Automation, Beat Construction, Compression, Drum Techniques, Dynamic Processors, Effects, Equalisation, Filtering, Gain Staging, Low End, Meters & Metering and advanced Techniques), and I’m told there’ll be many more tutorials by the time you read this. As you can see, they cover a lot of ground, but the tutorial skill levels also vary considerably. Helpfully, each one is tagged as Beginner, Intermediate or Advanced, and while there are plenty suitable for beginners to start improving their skill sets, there are also quite a few that should delight even the most hardened industry pro.

At Samplecraze you create a course, pay for the videos for the course, and have access to that course 24/7, forever. Prices for individual tutorials are an absolute steal, ranging from £1 (about $1.33 when going to press) to £3, and there are also discounts available if you buy in bulk — there’s even a generous selection of free tutorials that will introduce you to Eddie’s easy-going delivery style.

Eddie mostly uses Steinberg Cubase Pro as his DAW in these videos, but even if you use a different application it should be quick and easy to adapt — I had absolutely no difficulty adapting any of his techniques to Cockos Reaper, for instance. He also uses a wide range of plug-ins and soft synths from various developers to teach his techniques. Because he explains why he’s altering particular parameters to achieve his ends, and because he’s usually deliberately chosen something with a good, large and clear GUI, you can easily adapt them to suit whatever effects and processors you have in your own arsenal.

The majority of tutorials currently on offer explain general approaches to production and sound design that will work across many musical genres. To give you an idea of scope, there are, for example, 20 tutorials in the compression category alone; as Eddie says, compressors are not just tools for controlling dynamics (of individual sources or busses), but also for more creative sculpting work. These compression tutorials, then, range from comparisons of the various basic compressor types (FET, Opto, VCA. Vari-Mu, Multiband and so on, with anywhere from transparent to radical changes), to their application to various styles of drum beats and vocals (EDM, Hop Hop, 808, 909...), via mix-bus compression, through to the more specialist techniques of pumping and swelling to beef up your low end, and advanced side-chaining techniques. For the specialist, there are also a few that delve into more specific techniques such as beat ripping (using Wavemachinelabs Drumagog) and chopping beats (using Propellerhead Recycle) — once again I found it fairly easy to adapt these techniques to my own equivalent tools.

Eddie’s commentary is very fluid and well explained, so as you work through each tutorial, it really does feel like you’re sitting next to an experienced but friendly producer, having a one-to-one session, with a little wry humour thrown in. He’s also a firm believer in letting you watch his workflow, so there’s none of the ‘dry and highly edited’ delivery I’ve heard from some other producers — if something unexpected happens while he’s working you get to see how he resolves the issue, often learning even more in the process.

Given his long CV, which ranges from programming synths for bands and labels, to a long career in sampling, remixing and producing for a host of different musicians and companies, it’s not surprising that Eddie’s ears are spot on, and once he starts tweaking sounds you soon get a good feel for what he’s aiming at in each genre. I enjoyed this aspect of the tutorials in particular — so many talented producers will tell you how good certain plug-ins are for doing certain things, but there’s no substitute for hearing the before/after improvements while seeing the various controls being manipulated, as it allows you to focus your ears on the changes.

Across the tutorial range there is a special emphasis on a couple of themes for which Samplecraze have become particularly well known: understanding how to get the best from your track’s low end and working with beats. Eddie also goes into detail on some really impressive time-saving techniques, including the ‘Mixing To Pink Noise’ approach that he explained in detail in SOS December 2014 (http://sosm.ag/mixingtonoise); I found that article helpful, but it’s great to actually see and hear that technique in action and witness the results. His highly regarded drum-layering techniques (that create new composite sounds via nudging and enveloping) are also featured in great detail, for those who want to go the extra mile and develop their own unique sounds, rather than pasting in presets.

Overall, as you can probably tell, I greatly enjoyed Eddie’s tutorials. He displays an enthusiasm while imparting his obviously in-depth knowledge that I found infectious. And even while just dipping into a selection of tutorials for this review I learned a lot, from concepts as varied as ‘blending’ and ‘squeezing the bounce’! Given the huge number of tutorials on offer, it’s perhaps inevitable that a few continuity glitches have crept in, such as briefly referring back to things in previous tutorials that you may or may not have purchased, but despite this the vast majority stand alone beautifully. Samplecraze Video Tutorials are incredible value for money, and a great way to learn.

Finally, as we were going to press, Samplecraze announced that as well as selling direct from their site, you can access their content via a subscription/rental model on the Audio Production Hub, where there’s a free trial period — so you have no excuse not to check this material out!