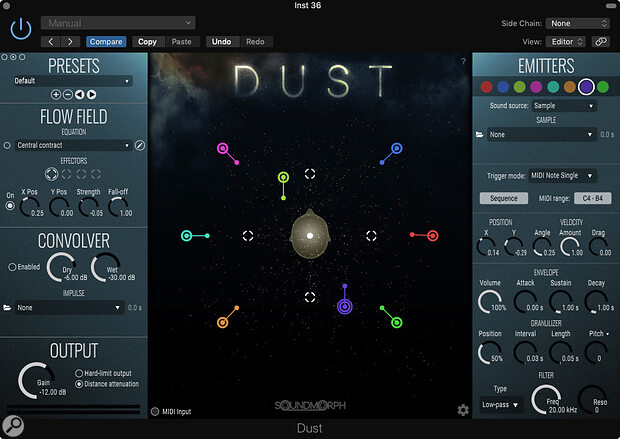 Dust is a synthesizer and an effect plug‑in based around both granular processing and convolution. It appears to be designed to create continuously evolving textures and beds rather than melody lines or pads and it is all controlled by an interface that looks like a Space Invaders‑type arcade game. Clearly these guys think so far outside the box that they’d need the Hubble space telescope to find out where the box was! If you imagine up to eight satellites wandering around in a force field, each one capable of generating sound, that’s pretty much the basis of Dust. These satellites, or Particle Emitters as they are called, generate sound based on the granular manipulation of either the onboard samples or, when used as an insert effect (Dust FX), a combination of internal samples and the track audio.

The Particle Emitters show up as coloured circles, which can be dragged around, and they emit sound particles represented as blips of light, which move around a visualisation of a dummy head. A protruding line denotes the speed and direction of the emitted sound particles, which move around the Flow Field for a time set by their amplitude envelope, after which they disappear. There’s a list of Flow Field types ranging from spirals to the equivalent of gravity wells and in conjunction with the modulation options there are lots of ways to keep the sound moving.

Because it comes with a huge sample library that can be massaged in almost infinite ways using the granular parameters, you’re never going to get typecast using this plug‑in.

Parameters of each Particle’s sound can be modulated independently based on properties of the particle’s motion as influenced by the Flow Field and so‑called Effectors — draggable points that can attract or repel particles. Most of the samples that feed the granular engines are either varying in pitch or non‑pitched (bowed cymbals, organic noises and so on) though you can adjust the pitch of the sounds being emitted and even lock the pitch control to specific musical scale types via its disclosure arrow. Even the convolution section is unusual in that, in addition to reverb IRs, there are also IRs created from glass, water, resonant tubes and so on that add a specific character to the sound. You can also load your own IRs.

Particle Emitters can be triggered from MIDI notes within a user‑specified range (essentially used as switches) or triggered automatically from a step sequencer. The sequencer can either run automatically or be set so that sound is only produced when a MIDI note in the specified key range is held. Emitters can also be turned off. Further controls relating to their envelope and granular processing parameters are below and the Particle Emitter buttons glow in proportion to their sound output. The step sequencer, which can be tempo‑sync’ed, has an adjustable rate and number of steps, each consisting of a slider with a tickbox below it that sets whether a particle should be emitted on that step. Each slider sets a ​parameter value that can be mapped to a range of particle parameters. Right‑clicking on a parameter knob opens up the modulation options for that control.

In order to get a feel for this plug‑in you really need to try it, which is possible using the free demo version and the wide range of impressive presets. Because it comes with a huge sample library that can be massaged in almost infinite ways using the granular parameters, you’re never going to get typecast using this plug‑in, and while it would clearly work brilliantly for creating sci‑fi or horror film soundbeds, it also produces some lovely textures that can be sprinkled onto your compositions or mixed with existing synth sounds to give them a sort of Wavestation complexity. It is also a sound designer’s dream and can work magic on external sound sources. OK, so Dust is weird, the results are not always predictable and you can’t play tunes on it — but it is still quite brilliant.

Dust is a wonderful sound design tool but it isn’t in any way conventional, whether used as an effect or as an instrument.