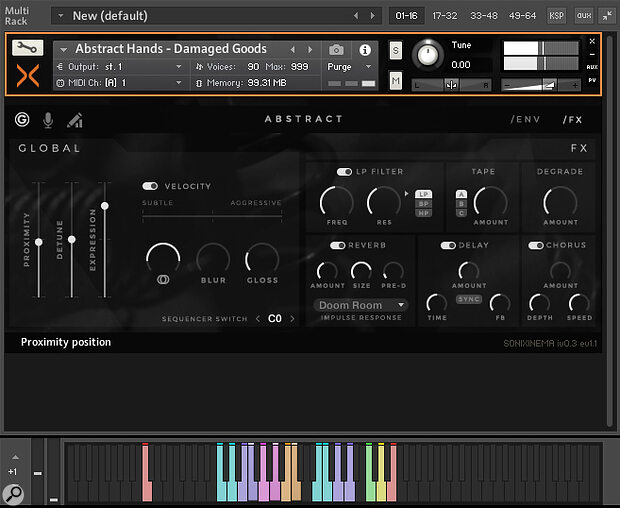 As percussion instruments go, the Marvin — designed by the company Morfbeats — is something well out of the left field. And, as Sonixinema have sampled a Marvin being played by expert percussionist Joby Burgess for their Kontakt‑based Abstract library, I guess ‘abstract’ is a fairly good word to describe the sound.

A Marvin looks a bit like a steampunk invention from leftover bits of a metal bedstead but its combination of various springs under tension and a sort of cowbell‑like chamber, all welded together with metal rods, makes for a lot of different types of surface to hit. And that’s what Joby obviously spent some considerable time doing, with his performances impeccably captured using an impressive array of close and room microphones in Mark Knopfler’s British Grove Studios. The resulting virtual instrument includes presets divided into five groups. The Hands, Sticks and Springs presets offer multisampled hits, with round‑robin, velocity and left/right‑hand options, while the Bowing and FX groups are built from longer, sustained samples or multiple hits.

In addition to the various core samples, Abstract’s front‑end, which is divided into Global, Mixer, Sequencer/Gater, Envelope and FX tabs, provides plenty of sound customisation options. For example, the Mixer tab lets you adjust the various close/room mic balance, while the FX section also includes reverb and delay options. For more experimental treatments, you also get low‑, band‑ and high‑pass filters, all of which can be operational at the same time. Amplitude, filter and pitch ADSR controls are also provided. I have to say that this is perhaps not the prettiest UI I’ve ever used but, once you have skimmed through the PDF manual for the first time, it’s all intuitive enough.

The highlight feature of the UI is the Sequencer/Gater. For the Hands, Sticks and Springs presets, this works as a step sequencer/arpeggiator. While the underlying sounds are interesting in their own right, the sequencer allows you to rapidly create some cool rhythmic patterns. You can create your own or explore the supplied sequencer presets. For the Bowing and FX groups, the Sequencer switches to a Gater mode to create rhythm out of the sustained sounds. Media composers would enjoy both modes and you can create some undoubtedly ‘abstract’ percussive performances.

Weird and mostly wonderful, will Abstract bring the Marvin to the musical mainstream? Perhaps not, but it is a cool virtual instrument. I can most certainly see it appealing to those looking for something a little different to spice up their virtual percussion arsenal.