Do you ever go on a musical exploration? And did you ever consider taking a saxophone with you? If the answer to both of those points is ‘No’, then you’re in luck, because Sonixinema have been pretty productive over lockdown, working remotely with saxophonist Jay Reynolds on a project with saxes at its core. 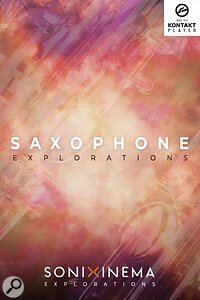 Saxophone Explorations is not your traditional instrumental sample library. If you’re looking for ‘Careless Whisper’ or ‘Baker Street’, you’re firmly in the wrong ball park, but what we do have is a really eclectic and diverse set of samples, which take the instrument to the outer edges of its technical and tonal capabilities.

The first couple of patches begin with arpeggios, played both fast and slow. It’s clear that they were performed to a metronomic pulse, but it is regrettable that there is no DAW tempo matching; then again, it could be argued that the whole point of these samples extends further than the norm. In this case, the samples are presented over a two‑and‑a‑half‑octave range and played, not triggered. This means that while the playing is very strong, there are moments of welcome imperfection. Once the sample reaches its conclusion, the remaining harmony drifts off into the ether, thanks to some rather beguiling back‑end effects.

Part of Jay’s sonic‑sax arsenal is a Eurorack rig, complete with modules providing delay, resonance and even granulation. This doesn’t appear to come into play straight away, but there are a number of controls, both immediately available and from the FX panel, that allow you to give the exploration some colour.

Apart from the MIDI assignable expression control for instrument volume, a see‑saw fader drifts between Subtle and Vivid, controlled via MIDI CC 1 (mod wheel). This moves from a centred tone to a more ambitious and treated sound, with interplay from other nearby controls labelled Blur and Gloss. These effect the tone of the instrument quite radically, in an almost filtered sense, although there is a traditional subtractive filter available from the FX page as well.

Saxophone Explorations is a surprising find! It’s full of terrific sax content, with true creative potential away from the more usual instrumental constructs.

Many of the included patches take the sax to the edge of its comfortable capabilities; there are howls, buzzes, shakes and overtones, all of which make fantastic starting points for creative sound design, and there is plenty lurking under the hood to provide sonic interest.

By way of contrast to the Philip Glass‑like arpeggios which form the first patches, the presets labelled Harmony build up chords over much longer time periods. The Dominant Long patch is an excellent example, as a dominant chord manifests slowly. Add in further note triggers across its metronomic time zone, and you immediately create a sax‑coloured backdrop of enormous proportions. There is also a Gating page which allows for rhythmic control alongside the DAW.

Saxophone Explorations is a surprising find! It’s full of terrific sax content, with true creative potential away from the more usual instrumental constructs.