Anyone who spends time creating patches on a modular synthesizer will enthuse about the joy of the patch, while lamenting the obstruction to work flow. In a bitter twist of irony, the larger the system becomes, the more complex the sonic possibilities, and the greater the time vacuum! 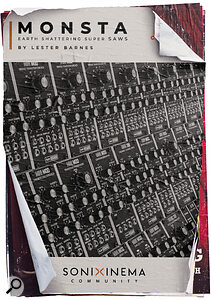 Talking of large modular systems, they don’t come much bigger than the MONSTA system (Modular Oscillator Network System, Totally Analogue) owned by acclaimed media composer, Lester Barnes. Reputed to be one of the largest modular setups in Europe, occupying both sides of the composer’s studio, the substantial rig comprises an eye‑watering 114 VCOs. Imagine the noise that lot will make! Thankfully, we need imagine no more, because Sonixinema have teamed up with Lester to create a library of ‘Earth shattering super saws’.

On the surface, the MONSTA sample library appears simplistic enough, armed with 15 different Kontakt patches, but in reality, each patch has the capacity to go fairly deep.

The opening Saw‑salvo is billed as the ‘MONSTA Clean’ patch. You’ll obviously want to start by playing a low drone, at which point your smile mutates into laughter, at the sheer swarm of 114 oscillators, tweaked and detuned to perfection. Patching the MONSTA took four days, with an additional 30 minutes to tune each VCO module before sample capture. You can hear the detailing that has gone into the preparation, with audio capture undertaken using Prism and MOTU audio interfaces.

A set of global faders, to the left of the instrument GUI, allow for dynamic and tuning control, with the Proximity control adding or subtracting detuned oscillators. This allows for swells to be created in the VCO collective. A degree of tone control is obtained via two controls labelled Blur and Gloss, which act rather like treble and bass controls. A compliment of three ADSR envelopes provide control of amplitude, filter cutoff and pitch. There is no ‘modulation amount’ pot, which would be useful for controlling filter and pitch modulation, but arguably you don’t want to mess with the source sample‑set too much, as it’s so impressive.

While this is clearly not an acoustic product, there is a compliment of four ‘mic’ faders; each of the four faders delivers a different signal, providing enormous control over the sonic makeup of the VCO collective. A fifth fader provides a sub‑oscillator, which stamps fundamental harmonic authority on every note. MONSTA also provides auxiliary effects, such as delay, tape saturation, reverb, chorus and an obligatory filter, equipped with low‑, high‑ and band‑pass modes. This filtering is Kontakt based, though, and not derived from the modular itself. There’s also an inbuilt pattern sequencer for creating step‑sequence and arpeggiation effects.

MONSTA is all about its source audio, and for my money, the additional functionality is secondary to the wealth of incredible‑sounding VCO content. Lester Barnes and Sonixinema have performed the patching perfection for you, and given the price, it’s difficult to ignore this as a bargain for synths, drones, pulses and much, much more.