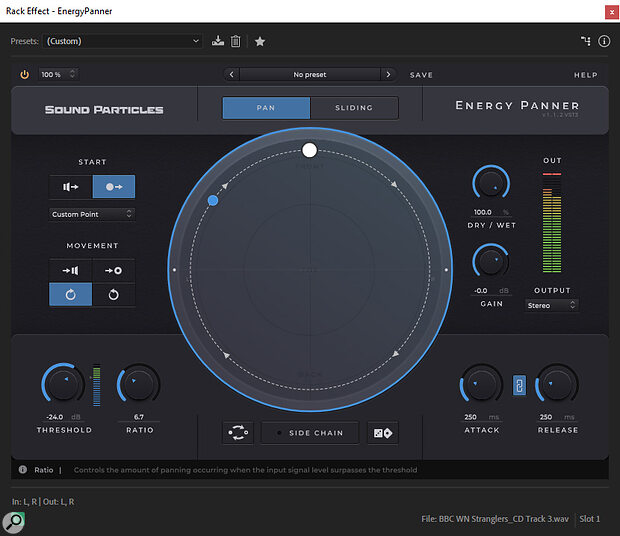 With applications in stereo mixing and immersive surround, this plug‑in is not your typical auto‑panner!

I can still clearly remember the excitement when, in the mid‑1980s, I first got to experiment with the revolutionary Audio & Design Panscan; what delight we had in making instruments surge back and forth across the stereo mix! Best of all was its external trigger that worked with an internal beat‑counter to make sources swap sides after a set number of, say, snare hits. The creative options were… well, quite limited by today’s standards, actually, but it was great fun all the same!

What brought this obscure blast‑from‑the‑past to mind was Energy Panner, a new plug‑in from Sound Particles, Portuguese software developers who specialise in unusual sound manipulation techniques, particularly for immersive audio applications. Energy Panner is a sophisticated auto‑panner plug‑in which employs the input signal’s amplitude (or ‘energy’‑ hence the plug‑in’s name) to trigger a variety of configurable auto‑panning operations. Sound Particle’s plug‑ins are available as free 30‑day trials, and purchased versions are authorised with unique serial numbers. They’re available for OS X 11 and Win 10 (or later), in the usual formats (VST 2 & 3, AU, AUv3 and AAX native).

A wide variety of I/O configurations are supported, including stereo (with various vector‑based amplitude panning output renders based on X‑Y, M‑S and binaural mic formats), ambisonics (using the ACN component‑ordering scheme and SN3D normalisation), horizontal surround in five‑ or seven‑channel arrays (with and without subwoofers) and also in 7.0.2/7.1.2 surround‑with‑height options for Dolby Atmos or other immersive platforms.

The user interface appears fairly simple, with just half a dozen rotary controls and a dozen buttons, and the GUI can be sized on screen with eight scaling presets ranging from 25 to 400 percent. A central, circular Dome display, which dominates the GUI, is intended to represent a three‑dimensional acoustic space like a ‘domed cupola’ within which the input signals are panned. The start and end of each pan action are indicated by white spots within the dome called Points, and a dotted line between them denotes the panning ‘trajectory’. Speaker locations for the selected output format are marked around the circumference of the Dome, and thus the left/right and front/back directions are made obvious. Pan movements towards the centre of the Dome increase the output sent to the height channel, when present. 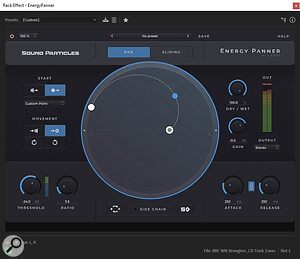 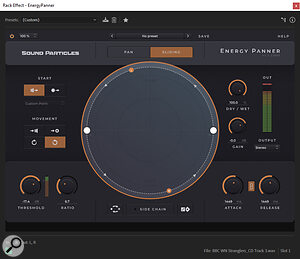 Sliding Mode, circular path through speakers, with the two channels moving opposite each other.So the basic concept is that signals pan from a defined start location and move towards the desired end location, either of which can be set Points or loudspeaker positions. The panning movement’s progress along the trajectory path is determined only by the signal’s amplitude, so that the louder and more sustained the signal, the further it gets along the trajectory path. However, things are made slightly more complicated by Energy Panner’s two distinct operating modes, called Pan and Sliding, selected with large buttons above the Dome display. The current status is reflected in the controls being predominantly shaded blue when the Pan mode is selected, or orange for the Sliding mode.

In both cases the input signal pans from the defined start position towards the end location but in the Pan mode, when the input level falls, the pan direction reverses so the sound moves back towards its starting point. In contrast, the Sliding mode’s panning is always progressive; a loud or sustained signal moves along the trajectory path as before, but instead of returning to the start point when it gets quiet, it just remains where it is until the next loud section advances the panning further. In other words, in the Sliding mode an intermittent signal always sounds from its last known pan position, whereas in the Pan mode intermittent signals always begin from the original start location.

Four controls adjust the relationship between the signal’s amplitude and the panning activity, and these controls are labelled and work in much the same way as those of a standard compressor. The Attack and Release time constants set the speed of panning for the starts and ends of each movement, respectively. Both have a range of 1ms to 5s, although I found that settings below two or three milliseconds can result in a choppy distortion, similar to a ring‑mod effect. By default, the Attack and Release controls are linked so that both time constants have the same value, but a Link button can be released when different attack and release times are required.

The most critical control is the Threshold, since panning only starts when the input signal exceeds the set threshold and stops when it falls back below it. To help find the appropriate setting both the adjacent bar‑graph meter and a coloured ring around the control change to green when the signal exceeds the set threshold level. A Ratio control sets the amount of panning movement introduced once the signal exceeds the threshold, with a range of 1:1 (no action) up to 100:1 (lots!). So the higher the Ratio value the greater each pan movement will be, and by balancing these four controls it is possible to set when, how far, and how fast each panning movement will occur.

Like that old Panscan, one of Energy Panner’s most useful features is an external Sidechain input which is activated with a button below the Dome display. This allows the panning movements of one sound to be triggered and controlled by a completely different sound coming from a different source in the DAW. Sadly, there’s no beat‑counter facility, so if you want to make one instrument zoom across the soundstage after every fourth hi‑hat beat you’ll need to create a dedicated control track for Energy Panner’s side‑chain input (in which case programming the pan automation on the source track might be quicker and easier!).

Two more set‑and‑forget rotary controls adjust the output level (there’s 10dB of output boost available above unity) and the wet/dry balance. A set of bar‑graph meters are provided alongside the output gain control, their number reflecting the selected output format (with options for resetting peaks, and in the multichannel modes the channel order can be selected between SMPTE or Film standards). Although there’s no meter scaling, the bar‑graph colours change from green to yellow at around ‑24dBFS and to red at ‑6dBFS. The wet/dry control blends the unpanned input source signals into the corresponding panned outputs’ channels, if desired. There’s also the standard On/Off button to activate a full bypass, and a preset navigator with the usual facilities to save and recall parameter presets, or to select a specific preset as the startup default.

Much of Energy Panner’s cleverness comes from its options for establishing the start locations and specific panning movements. Two buttons on the left of the Dome display determine from where the signal pan starts. When the Speaker Start mode is selected, all input channels start their panning journey from their own speaker locations, while for the Point Start mode all input channels originate from the single Start Point (effectively as a mono sum) which can be dragged anywhere within the Dome, or a point selected from a drop‑down list of predefined locations, such as hard‑left, dead‑centre (top), or some user‑defined custom position. 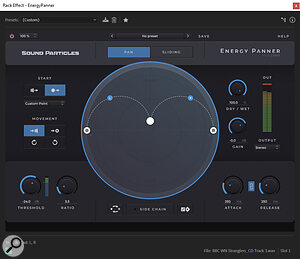 Pan mode, moving from central point out to stereo speakers (stereo width increasing).That’s where the sound starts its journey, but what about where it’s going? Again, there are four prescribed movement options: to Speakers, to End Point, and either clockwise or anticlockwise continuous circular rotations. Inevitably, selecting the Speaker Start Point along with the To Speaker Movement option results in no panning action at all, but all other combinations are productive. If End Point is selected the point can be dragged to any desired location, while the size of the circular path (how far away from the centre, so how broad the pan sweep) can also be adjusted, although there’s no ability to offset the circle’s centre point. Extra related features include a button below the Dome, which inverts the movement direction, and another that changes every parameter at random, with the aim of creating a serendipitous result. 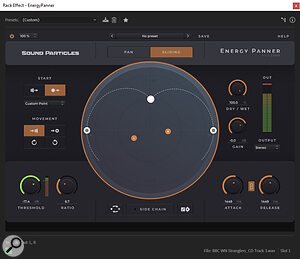 Sliding mode, moving from centre line to speakers and continuing beyond in continually developing (but unmarked) circular paths.

While Energy Panner can certainly be used to good effect in straight stereo mixes, it really comes into its own with surround sound and immersive mixing formats, just because there is more acoustic space to play around in. Of course, it probably goes without saying that Energy Panner is probably best employed sparingly, to add ear‑candy effects, but I rather enjoyed having one or two sources wandering around the sound stage at different points in some tracks I was messing around with.

Most of the plug‑in’s operation is pleasingly logical and straightforward, and after a little experimentation it’s quite easy to get instruments and sounds moving around exactly as desired. The Pan mode is the easiest to get to grips with, as it gives obvious and entirely predictable results. However, sometimes that ‘out‑and‑back’ panning movement isn’t really what’s needed, and the Sliding mode’s stop‑start forward progression may be more appropriate.

It’s quite easy to get instruments and sounds moving around exactly as desired. 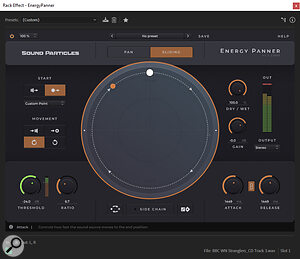 Sliding Mode, circular path.However, there’s a degree of unpredictability involved here because the trajectory path shown in the Dome describes only the plug‑in’s initial intentions! Rather than just moving to the defined End Point, the panning carries on far beyond the initial trajectory path, and the evolving course seems semi‑random and mysterious — although I’m sure there’s some mathematical logic behind it! Regardless, this Sliding mode is not a feature I’ve come across anywhere else and it really produces pleasing and ever‑changing pan movements which make a very creative alternative to the simpler ‘out‑and‑back’ Pan mode.

The user manual doesn’t give any information about the different ‘stereo render’ modes, but I found they produce quite different spatial localisation effects, which are especially noticeable when using the circular pan movement paths. Auditioning on speakers, I generally found the straight stereo mode gave the best results, but on headphones the X‑Y render proved most convincing. The M‑S and Blumlein options both introduced odd and unexpected level dips and slightly phasey effects at different parts of the rotation cycle.

Something I discovered by accident through experimentation is that it’s also possible to use Energy Panner to vary the image width of a stereo source as it gets louder. By using a Start point placed on the mid‑line of the Dome and setting the movement mode for ‘To Speaker’, a quiet signal starts in mono at the centre of the image but as it gets louder its stereo width increases progressively, giving the impression of the source moving towards the listener. Imagine hearing the almost mono roar of the crowd as you walk down the tunnel at a football stadium, and the way it would get both louder and wider as you exit the tunnel! 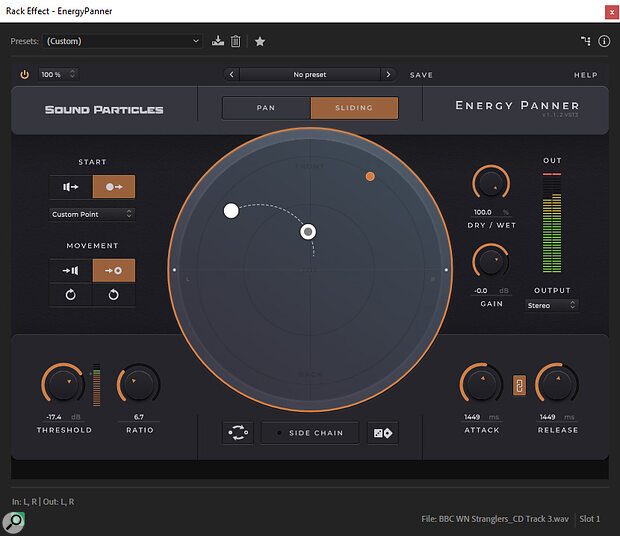 Sliding mode, moving from point to point in a mono sum but continuing on semi‑randomly (the actual sound location can be seen far off the original trajectory path.

In conclusion, then, Energy Panner is a sophisticated and unusual plug‑in with some unique features, and is capable of generating creative and pleasing panning effects with considerable versatility. I imagine Energy Panner could be a useful and popular tool for game soundtracks and film/TV post‑production applications, but it is also useful when mixing for music. It copes seamlessly with multichannel immersive and surround sound formats where it really shines, just because pan movements can be more dramatic with more overt options for start and end points. But it really does work very well in stereo too, and I had great fun exploring what it could do.

A unique and interesting dynamic panning effect with lots of creative potential to explore.