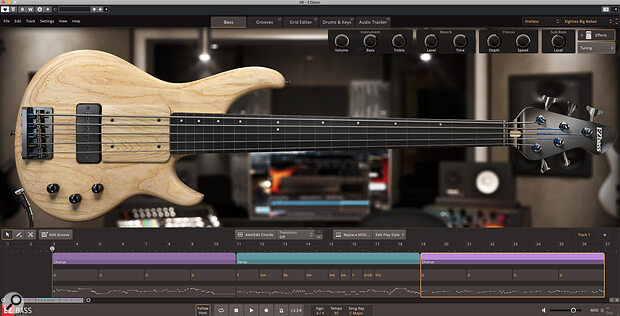 Toontrack have kept the EZbass add‑on content coming at a breath‑taking pace over the last 12 months with both sound expansions and MIDI groove packs. The latest release is Fretless EBX, which offers the very distinctive sound of the electric fretless bass to the EZbass user. An Ibanez Gary Willis signature five‑string fretless bass — this model is priced in the £$4000 range — ensured a top‑quality sound source, while the included MIDI groove content was performed by Laurence Cottle, whose impressive bass playing credits are both extensive and diverse.

As with the previous expansion, alongside a crystal‑clean DI version, Fretless EBX offers a good range of amp‑based presets and a few, well‑chosen, effects. These cover plenty of sonic ground so, whether your mix needs a thunderous low end (the Big And Round preset), a more mid‑focused presence (Mid Boost), some amp‑style warmth (Classic Amp) or a touch of ’80s processing with the option for some OTT chorus (Eighties Big Ballad), and various stops in between, the Fretless EBX has you covered. And, as with all the EBXs I’ve experienced so far, the sound is excellent. While there are all sorts of reasons to commend the option of recording your own bass, you are going to need to be very good at it if you want to outdo what EZbass can offer in sonic terms.

Fretless EBX is an excellent addition to the EZbass range.

As far as I can see, within the EZbass engine, the Fretless EBX offers the same performance articulations as its fretted siblings. However, the supplied MIDI groove content soon makes it clear that the distinctive sounds of a fretless are available. This is primarily achieved through the use of the hammer‑on/pull‑off legato articulation (which generates that distinctive note blooming sound) and the options for note slides that allow the smooth, fretless, transition between notes to be heard. Both are well executed and very effective, but it makes the value of the MIDI groove content for this expansion very obvious. It’s also a good ‘how to’ tutorial if you want to adapt other EZbass groove content to give it a more obvious fretless character when used with the Fretless EBX. Toontrack have also just released the Jazz EZbass MIDI pack if you want to add further MIDI grooves designed with a fretless in mind.

The sound of a fretless bass is, of course, something of a niche requirement in contemporary music but, in the hands of the right player — Jaco Pastorius, Pino Palladino, Les Claypool, Sting and, of course, Gary Willis, whose signature bass was used here — it has been responsible for some truly iconic musical moments. Yes, these virtuous players will undoubtedly coax maximum expression out of the instrument but, for the rest of us, EZbass and the Fretless EBX will get us remarkably close with a minimum of fuss, a modest cost, and without all the tuning inaccuracies produced by a less experienced player.

Fretless EBX is an excellent addition to the EZbass range. One can only hope that an acoustic upright bass is also somewhere on Toontrack’s development horizon.

Fretless bass may be something of a niche requirement, but the Fretless EBX captures that distinct character brilliantly. Yet another tempting expansion for current EZbass users.